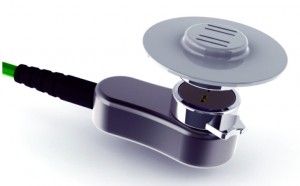 Often simply referred to as capacitance, radio-frequency (RF) impedance has been used for over two decades to measure online biomass. It is generally regarded as the most robust and reliable method to monitor live-cell concentrations in mammalian cell culture (1). Many biopharmaceutical companies have now made the transition from conventional glass or stainless steel multiuse (MU) vessels to single-use (SU) bioreactors. Disposables are rapidly becoming the preferred platform for new processes requiring current good manufacturing practice (CGMP) compliance. At the process development level, RF impedance typically is used in the majority of MU bioreactors to optimize process cell growth. So it is important that the same technology be available in CGMP production bioreactors. Here we show how a new capacitance-based biomass probe has been developed for SU bioreactors with applications for the technology in different vessel formats.

Theory of RF Impedance
RF impedance spectroscopy is a technology that measures dielectric properties of a cell suspension. From the resulting measurement, users can derive the biomass content present as well as other cell properties (e.g., cell diameter, internal conductivity).

For modeling purposes, a suspension of cells can be regarded in terms of its three separate environments: the cytoplasm, the outer plasma membrane, and the suspension medium. The cytoplasm is a highly complicated and structured mixture of salts, proteins, nucleic acids, and smaller molecules. In eukaryotes, a number of internal, membrane-bound structures also are present and affect the cellâ€™s dielectric properties. Surrounding the cellâ€™s conducting core is a plasma membrane, which is essentially nonconducting. The suspension medium is generally aqueous and ionic. Therefore, from an electrical perspective, a cell culture can be regarded as a suspension of spherical capacitors, each containing a conducting matrix (cytoplasm) and all surrounded by a conducting medium. 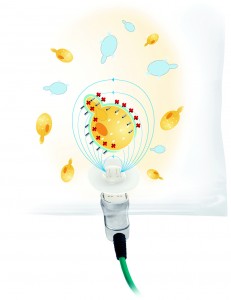 When an electric field is applied to a suspension of cells in an aqueous ionic solution, the ions in that solution are forced to move. Positively charged ions are pushed in the direction of the field, whereas negatively charged ions are pulled in the opposite direction (FigureÂ 1). Ions both inside and outside a cell move until those ions encounter its plasma membrane, which acts as insulating physical barrier to prevent further movement. In bulk, such movement leads to a charge separation or polarization in cultured cells. The magnitude of the suspensionâ€™s field-induced separations is measured by its capacitance (C), which is typically reported in pico-Farads (pF).

As the volume fraction of cells in a suspension increases, the number of polarized membranes also increases â€” ultimately yielding a higher measured capacitance. Thus, by measuring the capacitance of a suspension at one or more appropriate frequencies, its biomass can be estimated. Dead cells and nonbiomass solids do not possess intact plasma membranes and thus do not polarize notably. Therefore, they do not contribute significantly to the capacitance of the cell suspension. Similarly, if debris or gas bubbles are present in the medium, they will not contribute directly to overall measured capacitance because they also are not membrane-enclosed particles.

DevelopmentÂ of the FirstÂ SU Sensor Disc
A disposable biomass probe based on RF impedance was developed by Aber Instruments and first shown in 2009 at the biennial meeting of the European Society for Animal Cell Technology (ESACT) in Dublin, Ireland. The probe was designed to be welded into most single-use bioreactor designs and was suitable for flexible film bags of 1-L volume and larger agitated by either stirrers or rocking motion. This disposable biomass sensor disc has four â€śflushâ€ť pure-platinum electrodes with the same dimensions as previously existing reusable production biomass probes from the same company, with flush electrodes that are currently used in CGMP cell culture processes worldwide. 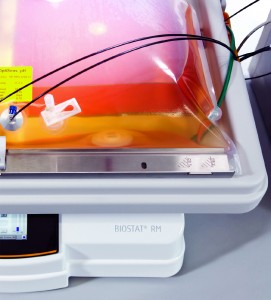 The sensor disc support material is high-density polyethylene that meets US Food and Drug Administration (FDA) and US Pharmacopeia (USP) class VI requirements. The disc can withstand gamma sterilization and be stored for prolonged periods before use. It is easily connected to a miniature, lightweight preamplifier (Photo 1) so that the weightÂ load or torque on the bag is minimal, and the bulk of the electronics will be thus located well away from the bag. The disposable probe can be welded into the polymer film wall of a SU bioreactor (Photo 2). In early studies, its performance mirrored the growth curves of a Chinese hamster ovary (CHO) cell culture monitored with a reusable 12-mm annular Aber probe at the 3-L working volume (2). 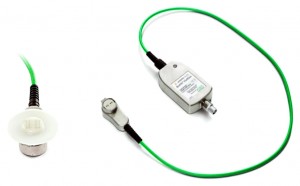 In 2013, Aber Instruments entered into a global sales and development partnership with Sartorius Stedim Biotech (SSB) for its SU technology. After design, manufacturability, and material sourcing amendments, SSB now produces the SU biomass sensor disc under license. The company integrates this sensor into its SU Flexsafe bioreactors and markets these products in a dual-branding arrangement. Under the
agreement, the new technology platform, sensor discs, and electronics are made available to all suppliers of SU bioreactors through SSB. The RF impedance electronics (manufactured by Aber Instruments) have been branded under the BioPAT ViaMass trade name (Photo 3).

The sensor disc fulfills both FDA and USP class VI requirements, and it has been qualified and tested by SSB for integration as a standard component within a comprehensive validation guide. Biological, chemical, and physical test results of sensor discs following gamma-irradiation sterilization â€” combined with extractable testing â€” show acceptable extractable levels and excellent compatibility with relevant pharmacopoeias and guidelines. Complete details can be found in SSBâ€™s validation guide for its Flexsafe bioreactors. BioPAT sensors also have been tested at SSB in SU bioreactors up to 1,000 L in volume and will be tested in 2,000 L volumes. To date, this technology has been fully released in BIOSTAT B benchtop bioreactors with RM rockers and rolled out to BIOSTAT STR stirred-tank bioreactors in the early part of 2016, thus completing the full portfolio for SU commercial biomanufacturing. This allows for automation and control from a one-operator interface on the BioPAT direct-controller unit (DCU).

ApplicationsÂ of SU Biomass Probes for Disposable Bioreactors
A major challenge with installing a disposable biomass probe in a rocking-motion bag is that the sensor disc will be exposed to varying levels of fluid. At minimum volumes, the probe will be exposed momentarily to the gaseous headspace of the bioreactor. Aber Instruments developed an advanced rocker filter algorithm â€” including an â€śantibeatâ€ť mechanism â€” to work automatically at varying rocker speeds (3, 4). 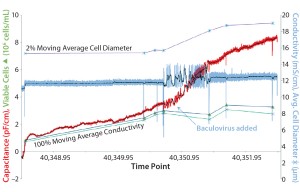 GlaxoSmithKline in the United Kingdom assessed this disposable probe combined with a new rocking filter in a prototype 25-L working-volume SSB Flexsafe RM bag. The BioPAT ViaMass system tracked viable cell density (VCD) of Sf9 insect cells before addition of a baculovirus. It successfully detected a valid infection based on a rapid increase in signal caused by the increase in cell volume of infected cells (Figure 2). 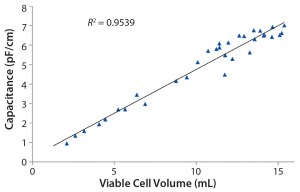 Figure 6: Correlation of on-line data to off-line measurement for a singleuse biomass probe

Figure 6 shows results from a CHO cultivation in a Flexsafe RM 50-L bag. The capacitance signal of the BioPAT ViaMass sensor is compared with the viable cell density of an offline Roche Cedex HiRes analyzer measurement used as a reference. In addition, the Cedex measurement principle reveals the average viable cell diameter (Âµm). Based on that, the average viable volume of the cells was calculated and multiplied with the viable cell density for each sample in the BioPAT MFCS sample management. The result gives a viable cell volume (% or cm3/mL), which represents the viable cell volume as a percentage of the total cell volume. Additionally, the wet cell weight is plotted, and data relating to cell viability (coming from the Cedex analyzer) are shown going from 100% down to 65%.

Note that the viable cell volume calculation is a cubic function based on diameter changes factoring in viability drop. Figure 4 overviews the correlations. Focusing on the results from Figure 3, the exponential phase in the first eight days for the capacitance signal of the online biomass measurement correlates excellently with viable cell density, viable cell volume,Â and wet cell weight. 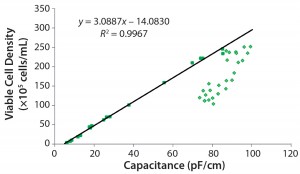 Subsequently, the cell diameter begins to increase rapidly, and viability drops. From that point on, the deviation in cell density increases with rising cell diameters. However, the correlation with the calculated biomass remains good up to the end of the cultivation. 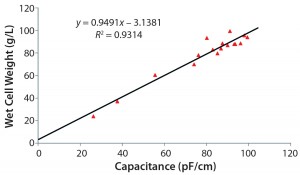 Online measurement of biomass (as a percentage of the volume) shows every small effect of biomass change during a cultivation process. For example, it showed each dilution caused by feed medium addition and growth-rate changes in the stationary and dying phase of the culture process. 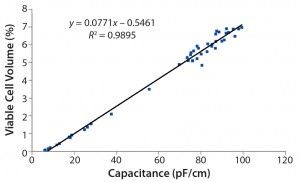 Also, those effects could be verified with offline reference measurements, which require additional sampling. In summary, these results show excellent performance for a fully integrated online biomass measurement in SU bioreactor equipment.

At Aachen University in Germany, CHO cells were grown in an RM 20-L SU bioreactor from SSB,Â and biomass was monitored using the BioPAT ViaMass system. 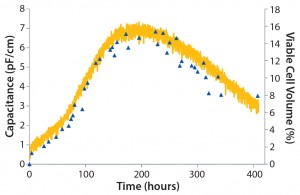 Figure 5 shows capacitance plotted over time, which provides a complete growth profile for this culture. As mentioned above, a capacitance signal measures the build-up of charge around live-cell membranes. Hence, it most accurately measures the viable biovolume of a cell culture. In this work, an increase in cell size in the latter half of the culture was determined offline. Therefore, capacitance was plotted against viable cell volume (calculated using offline cell-density and cell-size measurements). As can be seen from the graph, good correlationÂ was observed between capacitance and offline cell volume throughout the cell culture process. When capacitance was plotted against total cell volume, a regression coefficient of 0.95 was achieved, again proving the calibration modelâ€™s robustness (Figure 6). 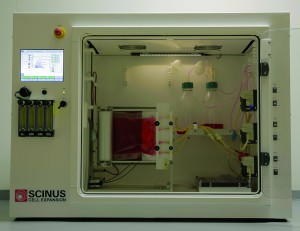 Xpand Biotechnology in The Netherlands: RF impedance has been shown to be suitable for monitoring live-cell concentrations of stem cells (5) using conventional reusable probes in 1-L bioreactors. So the single-use sensor should be ideal for the same application. Xpand Biotechnology chose the Aber biomass sensor because it showed good correlation with the reusable sensor signal for mesenchymal stem cell (MSC) concentration. The company has integrated this single-use biomass sensor in a bioreactor bag it has developed to grow adherent cells such as human MSCs. 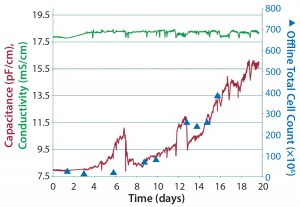 Photo 4 illustrates that Scinus cell expansion bioreactor system, and Figure 7 shows the performance of the disposable biomass probe in measuring MSC growth in the Xpand single-use bioreactor. The working volume of MSC cultures can be varied in this bioreactor from 150Â mL to 1Â L, but the described culture was performed at the maximum volume for the Scinus bioreactor. Fresh medium was added at specific intervals during the culture. The bioreactor was filled with medium and microcarriers (60Â g/L), then MSCs were inoculated at a concentration of 2.58 Ă— 104 cells/mL. The same concentration of microcarriers was maintained throughout the culture.

The biomass probe traced the growth profile of that culture successfully. This was confirmed using offline live-cellâ€“concentration measurements, in which the trend was similar to that of the capacitance profile. Cell concentration peaks in the culture when estimated using both methods at around the same time. In addition to measuring the growth of cells in culture, the probe also visualizes process changes such as medium addition and rocking speed/acceleration.

Proven Performance
Use of RF impedance to monitor cell culture processes is well established in biopharmaceutical applications. Introduction of the BioPAT ViaMass system allows this technology to be used with confidence in single-use bioreactors for CGMP applications, enabling inline monitoring of viable cell volume without the need for off-line sampling. That also has been shown with the Scinus cell-expansion system. Resulting capacitance signals can be used for automating the trigger for cell transfers within a seed train or for maintaining static cell concentrations in perfusion-based continuous manufacturing processes.

Acknowledgments
Funding came from the REACH project under the European Unionâ€™s Seventh Framework Programme for Research. We also gratefully acknowledge the support of Wendy Tra, Jordy Burer, and Marijn Driessen, all members of the bioreactor team at Xpand Biotechnology.

BioPAT, Flexsafe, and BIOSTAT are registered trademarks of Sartorius AG.