Cell-based products are becoming increasingly important as potential biotherapies. Cell therapy is predicted to have a huge impact on the healthcare sector over the coming decades. Stem cells, in particular, are investigated as potential treatments for a diverse range of applications (such as heart disease and metabolic and inflammatory disorders) in which they might be used to restore lost biological functions.

The cell therapy industry is starting to mature. Several emerging companies are now supporting late-stage clinical trials, and stem cell-based products should soon appear on the market. However, potential commercial success for such products is linked to the ability of sponsor organizations to industrialize manufacturing processes for ensuring cell supply and managing costs. Successful transition from laboratory scale, which is suitable for producing just a few batches per year, to an efficient and robust good manufacturing practice (GMP) process will be essential. If the economic model is to be viable, and if health authorities and insurers are to reimburse these products, then prices must be controlled. That translates to scaling out for autologous therapies and scaling up for allogeneics.

The research and development (R&D) process is based on currently available laboratory-scale technology, in which multiple-tray stacks are used to culture cells. That method is not practical for large-scale production, however, because it requires multiple manual aseptic operations. Those can present problems for consistency, reproducibility, and safety as well as quality assurance and control (QA and QC). The multitray option is also expensive â€” perhaps prohibitively so. Although the cost of purchasing a stack is not always prohibitive, the cost of running it can be expensive, costly both financially and in labor. 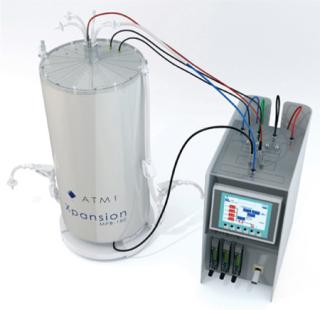 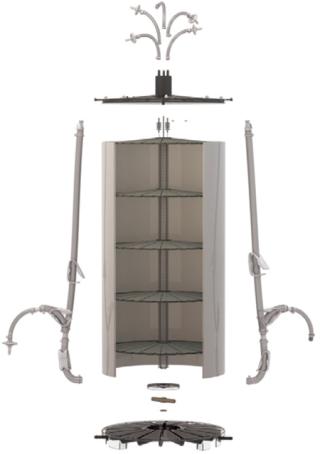 That was the problem facing Cardio3 Biosciences, a Belgian biotech company working on a cell-based therapy to protect patientsâ€™ hearts during myocardial injuries, reducing scar volume and reconstructing damaged heart tissue. The company’s developmental autologous therapy uses cardiopoietic cells made from a patient’s bone marrow stem cells, then injected into the same patient’s heart. Following successful phase 2 trials, the company now plans to advance into phase 3 studies. That will require an effective, efficient, and practical method for growing batches of autologous stem cells for more patients.

In 2008, Cardio3 approached ATMI LifeSciences to develop a single-container solution that might solve its scale-up problem. The company previously used a multitray stack to grow cells in a laboratory. For each patient, 20 such devices were required, with operations during the cell-production process carried out under laminar flow. That made scaling up/out the process very difficult because Cardio3 was facing an initial objective of about 3,000 patients per year in the early stages of commercialization. Using the laboratory process, that would have required some 200 aseptic operations per batch (2,000 aseptic operations per day). Achieving a current GMP (CGMP) process also would have been difficult. Coupled with the sheer space and number of operators required, that made it nearly impossible to create a viable and efficient business model. Simulations demonstrated that this company would have needed a 5,000-m2 facility equipped with 500 incubators and 160 biocabinets, employing 300 operators in numerous culture rooms.

What Cardio3 needed was a cost-efficient process that cultured high-quality cells to GMP standards on the necessary scale. For safety reasons, a closed system was required to guarantee sterility. The process also needed to be easily controlled to ensure reproducibility. Cost efficiency could be achieved by simplifying and reducing the number of operations (and operators) involved.

A Lack of Suitable Solutions

Single-use bioreactors are well established in biopharmaceutical production, for which they offer many benefits. Not only do they simplify QA and QC functions, but they also reduce overall costs and provide a flexible solution for manufacturing. However, most existing disposable bioreactors are designed for viral or protein production. Fragile adherent cells (such as stem cells) are highly sensitive to the physical parameters of their microenvironment. Factors such as the surface material, pH, dissolved oxygen, and shear stress all affect the way these cells grow and differentiate. And harvesting the cells is not trivial.

It might be possible to use a standard bioreactor in combination with microcarriers to provide a surface area on which such cells need to grow. But those have not yet been optimized for stem cell culture. Moreover, shear stress might affect stem cell cultures and require intensive process development. A three-dimensional (3D) scaffold might be a potential alternative, but its configuration could affect stem cell behavior (and differentiation) by modifying the niche microenvironment. There is no guarantee that cells grown in any 3D bioreactor would be the same as those grown on a laboratory plate.

All those problems could be prevented with a new multiplate design approach. This would mimic the cell-growth environment of a multitray stack and minimize risks encountered during process development. Cells would still grow on two-dimensional (2D) plates with similar physical characteristics to those used in Cardio3’s laboratory.

ATMI designed the Integrity Xpansion bioreactor with plates made from the same plastic (polystyrene) as is used in multitray stacks. After a common plasma treatment used to hydrophilize the plastic, studies show that the surface (Figure 1) is very similar to that of a comparator. 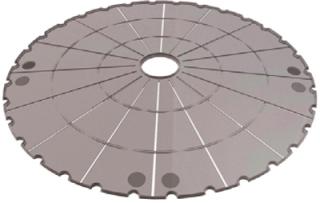 It was also important to reduce the siz
e of the device. A compact design was created by removing the gas-phase layer that allows gas exchange into media in which cells are growing. Gas exchange is essential, but in the Xpansion bioreactor it takes place within a central column in which medium circulates (rather than between the plates). That reduces the gap between plates from 15 mm to just 1.6 mm, enabling ATMI to fit â‰¤180 plates in a single device about 60 cm tall (Figure 2 and 3).

The surface of each Xpansion plate is ~614 cm2, roughly equivalent to each plate of a multitray stack. So one 180-plate bioreactor has the same cell-growing capacity as 18 stacks (11 m2) in Cardio3’s laboratory with a much smaller footprint than they would require.

These circular plates contain 16 radial channels to circulate media. Liquid moves up through the first channel, flows horizontally over a plate, then rises to reach a second plate, and so on through all plates until it reaches the top of the reactor. It is then recirculated and returned to the bottom of the stack â€” a design optimized to minimize shear stress on cells. The culture operates similarly to multitray stack cultures without their need for complex manual manipulation. And there is only one device to operate, not many.

Other technological improvements involve regulation and control of cell culture parameters. An Xpansion bioreactor can be operated as a fully closed system, guaranteeing safety and sterility during a cell culture process. In addition to temperature monitoring, ATMI added pH and dissolved oxygen patches to each plate. Combined with sensors on a unit’s head plate, they enable monitoring and control of gas exchange within the bioreactor and maintenance of correct pH and dissolved oxygen (DO).

Throughout a process, the precise environment in which cells are growing can be regulated and controlled, which is particularly important for fragile stem cells that are very sensitive to their environment. This will greatly increase process reproducibility. For autologous cells, it is important to remember that each batch will be different. Stem cells harvested from one patient will react differently from those harvested of another, so environmental control is a necessity.

Another important feature of the Xpansion system allows operators to observe cells as they grow within the bioreactor. Cell density can be calculated automatically, and cell morphology can be checked. Specialized light microscopy developed by Ovizio enables cells to be observed on multiple layers of the bioreactor with very high image quality. This is also important for autologous cells. Those from one patient might take four days to reach confluence, whereas cells from another could take a week â€” and that is unpredictable. Proper monitoring of their growth will ensure that cells are harvested at the optimum time (Figure 4). 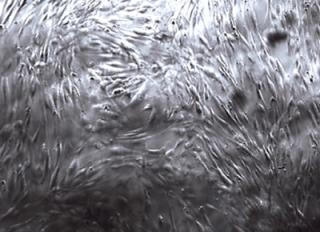 The biggest advantage of this new single-use bioreactor is that switching to it from multilayer stacks does not affect the quality or nature of the cells. That makes it possible to speed up the scaling process while decreasing risks. It eliminates the need to start from scratch and develop a new 3D manufacturing process in a traditional cell culture bioreactor, which would not be guaranteed to give the correct cell morphology. No aseptic operations are required (compared with 2,000 such procedures each day using previous technologies), and both space and operator requirements are cut by >60%. Only a class C cleanroom is required for transfer of cells into the bioreactor because no open handling takes place. And that is much less expensive to install than the class B room needed for multilayer stacks.

Reducing bioreactor and facility footprint enables economically feasible commercial-scale production, as Cardio3 found. Scale-up from the multitray stack process to one supporting several thousand patients would have been impractical in space and operator requirements. The Xpansion system makes that possible with a significant reduction in both those parameters. A quick calculation of the number of batches and patients indicates that 300 operators would have been required for a multitray stack scale-up; a validated cost simulation performed with two different customers showed that the number could be halved with an Xpansion system. The potential cost savings are dramatic. We calculate that for an autologous cell therapy to treat 3,000 patients per year, the annual operational expenses would be reduced by 40%.

There are also benefits in capital investment. The number of operations that must to be carried out under laminar flow is significantly reduced. With a smaller footprint, fewer incubators are required. These cost savings are important because cell-based therapies are predominantly the domain of small biotech companies with limited access to capital. They can’t risk investing several million dollars in constructing new manufacturing facilities. And commercialization becomes a more realistic prospect when capital expenditure requirements are reduced by 50%.

Using a close, compact, single-use, multiplate bioreactor provides a realistic solution to the problem of scaling up a fragile, adherent-cell manufacturing process â€”guaranteeing that stem cells retain the quality and morphology of those grown in an R&D laboratory. This would not otherwise be possible at a commercial scale without prohibitive investment and running costs.

Author Details
Matthieu Egloff is product manager, and Jose Castillo is director of cell culture at ATMI LifeSciences; 32-2264-1868; megloff@atmi.com; www.atmi.com. ATMI,
Integrity, and Xpansion are trademarks or registered trademarks in the United States, other countries, or both. Other names are trademarks of their respective companies.