Peptones have a long history of use in cell culture media. However, increasing emphasis has been placed on growing cells in animal-free and chemically defined systems for the production of biopharmaceuticals. This has created a demand for cell culture media supplements that equal the performance of peptones but have greater certainty of composition. This demand prompted BD’s efforts to identify the functional components of yeast extract to develop a chemically defined supplement, BD recharge. Formulation

The keys to making a successful peptone-based cell culture supplement were identifying functional components in the peptone and using DOE mixture designs to find the optimum formulation to elicit a peptone-like response. The correct mixture of nutritional components and bioactive promoters of protein production combined to achieve this goal. Out of this strategy, BD Recharge, a chemically defined, animal-free, and protein-free supplement was developed that provides growth and productivity performance equivalent to or better than yeast extract. This product has the benefit of high lot-to-lot consistency possible only with a fully chemically defined formulation (Figure 1), and the lack of animal-origin components further reduces risk. 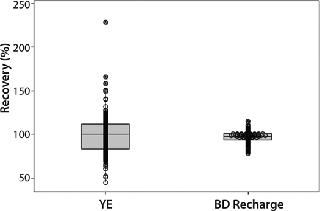 BD Recharge shows good growth and production response in several CHO systems, including derivatives of CHO-K1, GS-CHO, or CHO DG44. The cell systems used in the design of BD Recharge produced a number of different recombinant proteins including MAbs, enzymes, and nonenzymatic proteins. BD Recharge shows performance benefits when used with many base media formulations, broadening its applicability across a wider range of culture conditions. When optimized, BD Recharge has been seen to increase protein production to levels that meet or exceed that seen with peptone, sometimes without the need to reach the same cell density (i.e., with an increase in specific productivity) (Figure 2). Furthermore, protein quality attributes (e.g., protein charge variants shown by cation-exchange chromatography) are comparable between proteins produced with BDRecharge or yeast extract. 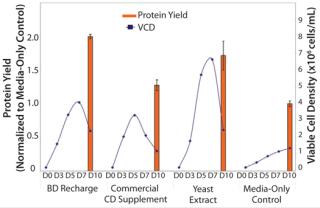 Next-generation chemically defined cell culture supplements can be developed by analysis of the functional components of a peptone. BD Recharge, based on yeast extract, is animal-free, protein-free, and chemically defined, and it boosts the productivity of a broad range of CHo host cell lines used in biopharmaceutical production. Other hydrolysates, such as soy or animal-origin peptones, could also be used in this discovery process to yield additional supplements with unique characteristics.