In the manufacture of biopharmaceuticals, single-use technologies are now employed throughout the workflow — from buffer and media preparation to bioreactor cultures for vaccines and biotherapeutics production as well as in the storage of those intermediates and bulk biologics. This diversity of applications adds to the difficulty in establishing appropriate testing and requirement specifications, as well as qualification and validation approaches.

The integrity and performance of single-use systems depends primarily on the characteristics of the film, the largest component (and product contact surface area) of any flexible container system. Thermo Fisher Scientific employs a three component science- and risk-based approach to characterizing single-use film addressing:

The expansion of single-use systems into drug discovery, process development, and manufacturing have exposed those systems to a growing and diverse number of cell systems used in bioprocessing. Recently, the impact of an ultra-low concentration leachables has been shown to inhibit cell growth and viability with a small population of Chinese hamster ovary (CHO) cells. While a number of conditions and process variables are required to generate the leachable, the investigation has served as an excellent model for evaluating the entire supply chain for single-use film — from resin formulations, additives, and/or compounding, material converting and assembly of the finished single-use product.

In this case study, the leachable Bis-(2,4-di-tert-butylphenyl) phosphate, or bDtBPP, has been shown to negatively impact a particular CHO clone at concentrations as low as 30 ppb. While the IHC Q3A guidance recommends reporting organic impurities in drug substances at >0.005%, it’s clear that concentrations ∼10,000 times lower than that threshold can inhibit cell performance in uniquely sensitive CHO cell lines.

Through the investigation, physical, chemical, and biological compatibility were analyzed, as was the full manufacturing and supply chain of a single-use film that exhibited this phenomenon. The function of antioxidant packages in single-use film are to stabilize the material as it goes through manufacturing (e.g., gamma irradiation) and into practical application where it will be exposed to various environmental elements (e.g., temperature, light, etc.). The presence of bDtBPP was traced to an antioxidant linked to the polyethylene resin that was incorporated into the contact layer of a single-use polyethylene film. In the overwhelming majority of polyethylene applications across multiple industries, bioprocessing and others, the over-presence of antioxidants is viewed as a positive. However, as these products grow in prevalence in biomanufacturing, understanding the full impact of these resin stabilizers is not only critical, but becomes an element for controlling the raw material supply chain. 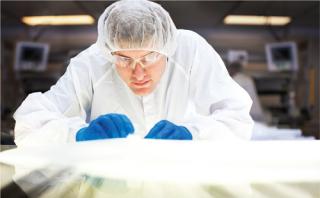 Given the diversity throughout the supply chain of single-use technologies, numerous physical, chemical and biological properties must be measured through a risk-based approach, and in some instances, routine testing of key performance attributes is required. This is important as each step in the process represents its own panel of risks, and each step can directly impact the quality, performance and cost of the final product. The outcome of this investigation has led to the optimization of the polyethylene antioxidant package in the new Thermo Scientific™ Aegis™5-14 Film. Further outcomes of this project have included routine re-qualification and verification testing on Aegis 5-14 at quarterly, semi-annual and annual intervals, including a complete leachable and extractable test done each year. The successful development of a new single-use film came from a deep understanding of the complex relationship between single-use film, cell culture media, single-use bioreactors and the biological systems employed to produce vaccines and biologics, and collaboration with key raw material suppliers and customers to ensure end-to-end success in bioprocessing applications.