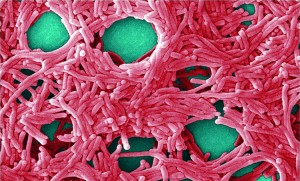 Gram-negative, aerobic Legionella pneumophila bacteria were first identified as the cause of an outbreak of severe pneumonia at an American Legion Convention in a Philadelphia convention center in 1976. Since then (and probably long before), it has been responsible for occasional such outbreaks around the world. For example, an epidemic of the disease probably occurred in Minnesota in 1957. Such incidents are usually associated with poorly maintained artificial water systems (e.g., cooling towers and evaporative condensers, hot and cold water systems in public and private buildings, and whirlpool spas). The most common form of L. pneumophila transmission is through inhalation of aerosols related to contaminated water, aspiration of contaminated water, and very occasionally working with contaminated potting soil (through the related species L. longbeachae).

The infective dose is unknown but assumed to be low for susceptible people and dependent on the bacterial concentrations present in the source, aerosol production and dissemination, and the bacterial strain. Most infections do not cause illness, making the disease itself rare. It has an incubation period of a few days to a couple of weeks, with initial symptoms of fever, appetite loss, headache, malaise, and lethargy. The severity of disease ranges from a mild cough (known as Pontiac fever) to a rapidly fatal progressive pneumonia with respiratory failure/shock and multiorgan failure. The mild form is an acute, self-limiting, influenza-like illness that lasts less than a week. Death rates for Legionnaires’ disease, however, may be as high as 40–80% in untreated immunosuppressed patients — and overall about 5–10%.

Epidemiology: L. pneumophila is found in natural freshwater aquatic environments worldwide. But artificial water systems provide environments conducive to its growth and dissemination. The bacteria live and grow at 20–50 °Celsius (optimal 35 degrees Celsius) and can parasitize free-living protozoa and biofilms that develop in water systems. They infect human cells using a similar mechanism by which they infect protozoa. There is no direct human-to-human transmission.

Some 10–15 Legionnaires’ disease cases are detected annually per million population Europe, Australia, and the United States. Some studies suggest that it may account for 3–15% of all cases of community-acquired pneumonia — and that an unknown number of individuals may be infected but experience only mild illness or no apparent symptoms. Some people may be more predisposed for the disease (e.g., advanced-age populations, cigarette smokers, and those with chronic lung disease or suppressed immune systems). Senior males may be most likely to develop severe disease: 75–80% of patients are over 50 years old, and 60–70% are male.

These bacteria are considered a public health threat, especially in the developed world. The risk can be reduced (but not eliminated) through building and water-system safety plans with regular monitoring to minimize Legionella growth aerosol dissemination. Such measures include regular system cleaning and disinfection and applying physical (temperatures >60 °C and <20 °C) or chemical measures (biocides such as chlorine). Such measures are best accompanied by proper vigilance by physicians and community health services for rapid detection. For rare outbreaks associated with contaminated public water systems, general treatment of those water systems is needed.

In the News: The most recent well-publicized incidence of Legionnaires’ disease happened in New York City this past summer. Based in a south-Bronx neighborhood, that outbreak killed 13 people and made more than 100 others sick. Officials blamed a heat wave that increased demand for air conditioning, poor maintenance of associated cooling towers, and a lack of regulation for those towers.

In August, GlaxoSmithKline (GSK) closed down a manufacturing plant in Zebulon, NC, for a few days when L. pneumophila was discovered in two cooling towers. The company manufactures solid-dose products at that facility along with performing granulation, drying and packaging, and contract manufacturing of antibiotics. After cleaning the towers and ruling out a risk to employees and products, GSK reopened the plant. Company spokesperson Jenni Ligday told FiercePharma that all drugs made there would be safe from contamination: “The cooling towers are external units with no contact with product or employees. Our products are safe and effective when used as prescribed.”

September outbreaks at California’s San Quentin State Prison and a Quincy, IL, veterans home have kept Legionella in the headlines.

The Coalition of State Rheumatology Organizations (CSRO, www.csro.info) reported in June on a national survey of rheumatologists’ perceptions of biosimilars. Findings revealed that such physicians are concerned about the approval process and overwhelmingly support clearer regulatory standards.

“Rheumatologists welcome the development of biosimilars as an avenue for improving patient access to important biologic medications,” said CSRO president Michael Schweitz. “But we want to ensure that patient safety is at the forefront of the approval process.” Survey respondents want further guidance from the FDA on critical issues such as interchangeability and naming.

Over 82% of those surveyed say they want “very rigorous” approval standards. Over 75% say the FDA should mandate that biosimilars have different nonproprietary names from the corresponding innovator biologics. Most (96%) said labeling should clearly identify medications as biosimilars and distinguish important differences between them and innovator drugs.

A July report from Signals and Systems Research forecasts the 2015–2030 biosimilar drug market segmented by drug class, approval category, region, and country. The report predicts that such drugs will account for over US$20 billion in revenue by 2020, with monoclonal antibodies (MAbs) dominating an estimated market share of 40%. SNS Research says that biosimilars could cut global healthcare spending up to $150 billion by then as several innovator biologic drugs come off patent. Between 2015 and 2020, over $50 billion worth of biologics could lose exclusivity. To control costs and expand global reach, most biosimilar makers are complementing their existing manufacturing and R&D locations with sites in low-cost countries.

FDA director Janet Woodcock says that healthcare providers need high-quality, reliable data to inform treatment decisions for pediatric patients. “C-Path has leveraged its expertise and stakeholders to support the development of a first-of-its-kind pediatric clinical trial network,” she said. This signals “an important step toward efficient and sustainable pediatric data collection and development of better treatments for children. I strongly support this effort and look forward to working with this global consortium.”

The concept was discussed at a November 2014 pediatric clinical trials stakeholder international forum hosted by the American Academy of Pediatrics (AAP) and funded by an unrestricted grant from the Pharmaceutical Research and Manufacturers of America (PhRMA). Clinicians, academicians, regulators, patient advocates, parents, AAP leadership, drug-industry representatives, and others unanimously passed a resolution to establish this network.

Orthobiologics: The Future of Bone Healing

Although they are the gold standard for bone grafting, autografts are limited by procurement, morbidity, and constraints on obtainable quantities. So new orthobiologics products are being developed through innovations in biomaterials and graft designs to mimic natural human bone and speed up its repair and regeneration. A July 2015 report from Frost & Sullivan says that novel ceramic and polymer biomaterial technologies have improved the biocompatibility, osteoconduction, and osteoinduction of bone grafts. Other breakthrough technologies — 3D printing, nanotechnology, and stem cells — have enabled healing and remodeling of bone, attracting the interest of patients and surgeons seeking improved clinical outcomes.