Antibody production platform processes have been widely adopted in biomanufacturing, but many unit operations are not suitable for integration and automation. Here we describe the work of integrating unit operations by transforming a column operation to a more robust cassette format. We have selected a biomolecule-friendly buffer (phosphate) to eliminate, or delay, the performance of a circulating tangential flow ultrafiltration/diafiltration (UF/DF) operation, so the harvest-to-purified-bulk process can be integrated, resulting in a single, direct-flow operation, that reduces the batch process time from about two weeks to six hours.

Antibody production platform processes were established in the late 1990s. In the past 20 years, biomanufacturers have been using engineered Chinese hamster ovary (CHO) and NS0 cells to produce antibodies, bispecific biomolecules, and other fusion proteins. Figure 1 shows the current platform process.

Such processes are associated with the following problems:

To overcome these challenges, we conducted studies to integrate and consolidate the current platform process from many independent unit operations to one. Doing so significantly reduced the processing time and enables future automated continuous processing without operators on the manufacturing floors.

Table 1: MabSelect SuRe LX protein A process steps and buffers

Results
Buffer Simplification: To integrate the process, the buffers used in the platform had to simplified and reduced. Our current platform uses ~15 buffers consisting of Tris, acetate, and phosphate buffers as well as NaOH and HCl. The following experiments demonstrated that Tris and acetate buffers can be eliminated. 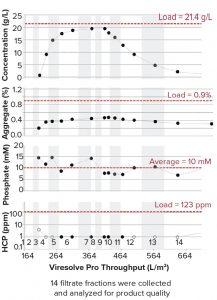 Figure 2: Product profile of flowthrough purification before ultrafiltration and diafiltration

Table 1 shows that the protein A chromatography methods and the transition from Tris and acetate buffers to the phosphate buffer scheme. The typical platform elution was ~2 CV at 20â€“30 g/L. 10 mM phosphoric elution buffer eluted a broader peak leading to larger eluate volume. If the equilibration wash is lowered to pH 6.0, the elution volume can be reduced to ~2.5 CV using the 10 mM phosphoric acid (H3PO4) eluent.

The protein A eluate pool eluted using 10 mM H3PO4 was titrated to pH 3.5 using 0.2 N hydrochloric acid (HCl) and held for 30 minutes for viral inactivation (VI), then titrated to pH 6.8 using 0.1 N sodium hydroxide (NaOH). The neutralized pool was then processed through the remainder of the purification process (depth filter + Q anion-exchange filter + virus filtration) using 10 mM phosphate buffer at pH 6.8 as a single direct-flow process step. The flow through was collected in 14 fractions. 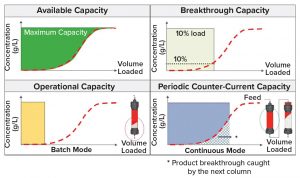 Figure 3: Increase use of protein A capacity

Results in Figure 2 show that the middle fractions reached concentrations of 19-20 mg/mL. Aggregates and HCP were very low. More important, the mean phosphate concentration was 10 mM. Therefore, if the formulation is in 10 mM phosphate at pH 6.8, the final UF/DF unit operations can be eliminated, and the total number of buffers can decrease by half or even more with three stock solutions of sodium chloride (NaCl), NaOH, and H3PO4 (Table 2). 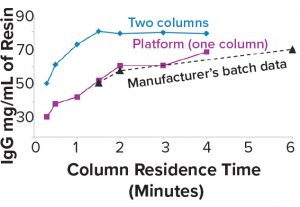 Multicolumn Protein A Chromatography: To increase the final purified bulk concentration, without the UF/DF step at the end of the process, it is necessary to increase protein concentration in protein A eluate pool. This can be achieved by loading the protein A column to a much higher mass capacity. Figure 3 shows that loading too much protein will have significant product breakthrough and reduce the step yield. That problem can be prevented by using two columns in series. 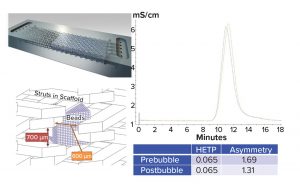 Column to Cassette Transformation: To overcome process robustness issue of a column operation, the new Chromassette platform was introduced to replace the column. This platform has an integrated scaffold support every ~700 Î¼m that prevents bead compression even at high flow rates and restricts the movement of packed resin bed. In this way, air cannot break up a packed bed and create channels. Figure 5 shows that air intentionally introduced into a Chromassette platform packed with MabSelect SuRe LX resin had virtually no impact on the height equivalent to the theoretical plate (HETP) and peak asymmetry results. 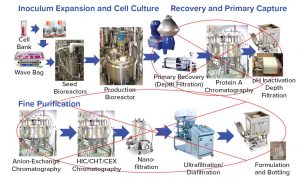 Figure 7: Platform process can be simplified

Integrated Process Concept: With the introduction of the Chromassette platform to replace columns and the development of a protein A membrane, the current platform process from harvest to purified bulk can be converted to a cassette format. A new concept is proposed that eight independent unit operations in Figure 7 are integrated into a one-unit operation as shown in Figure 8. This results in a uniform integrated recovery and purification (IRP) system. The IRP platform flows in series through the process train starting with harvest depth filters followed by a protein A Chromassette system, a virus inactivation chamber, postvirus inactivation depth filters, Q filter, a polishing Chromassette unit, and finally, the virus filter. The purified bulk can then be filtered through a 0.2 Î¼m filter into a bag for storage.

Figures 9 and 10 show a proof of concept of the IRP platform. In Figure 9, an ambr250 bioreactor (from Sartorius Stedim Biotech) harvest of 250 mL was processed through two depth filters, 0.2-m filter, and a protein A Chromassette unit. After virus inactivation, material was further processed through a depth filter, 0.2â€‘Î¼m Q filter, 0.1-Î¼m filter, 20-nm virus filter, and finally another 0.2-Î¼m filter into a bag of purified bulk drug substance. 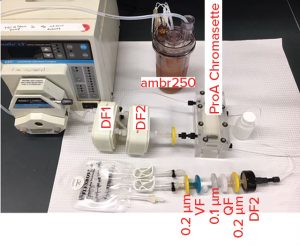 Figure 10 shows chromatograms of the harvest and protein A as well as the subsequent purification steps following virus inactivation. The gradual increase observed in the UV trace is not a result of product breakthrough, but rather a result of buffer dilution from depth filters. The purified bulk produced was 20 mg/mL concentration at pH 5.9 and contained 0.6% aggregate. More important, the entire IRP process was performed in six hours instead of the two weeks needed to complete the current manufacturing platform process. 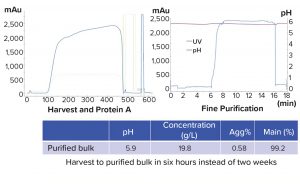 Future Bioprocessing Without Operators
Because the IRP platform is using robust filters and the Chromassette platform, and replacing disposable filter units is simple, robots could be programmed for future bioprocesses (Figure 11). Rather than on the manufacturing floor, operators could be in control rooms monitoring operation. The paradigm shift reduces the chance of contamination and operator errors introduced by human operators. In addition, because an IRP platform is compact, it can be housed in a small space, and the environment can be kept clean to prevent contamination. That could reduce the manufacturing footprint by at least 80% and shorten the time and expense for facility construction. Ultimately, such new systems have the potential to reduce manufacturing costs and ensure product safety. 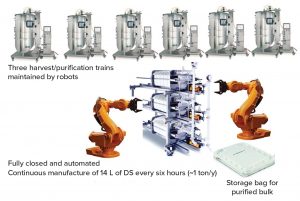 Advantages of an Integrated Bioprocess
The number of monoclonal antibody platform purification process buffers can be reduced significantly by using only phosphate buffers. With the introduction of the Chromassette platform to replace column chromatography, the unit operation is more robust. In addition, after transitioning a column into cassette format, the entire process from harvest to purified bulk can be integrated into one unit operation and completed in six hours. In the future, such integrated bioprocesses may be operated continuously at large scale by robots, producing approximately one ton of antibody per year within a small manufacturing footprint and with few required equipment systems.

Acknowledgments
Many scientists in Bioprocess Development and Analytical Development from the AbbVie OED CMC Biologics teams contributed to this article. We acknowledge Richard Wu for performing a number of downstream experiments and Dan Rush for many analytical assays. Thanks to Barry Wolf and Nikki Nguyen and others in BioProcess group for producing the cell culture harvest.