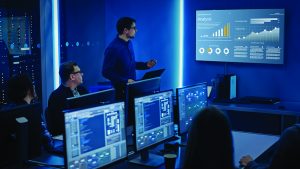 Artificial intelligence (AI) is a lot more sophisticated today than it was just a few years ago. Its impacts are felt outside of technology applications such as computing, malware, and natural language processing. For example, GoogleŌĆÖs AI (called DeepMind) recently solved one of biologyŌĆÖs greatest problems: It determined a proteinŌĆÖs three-dimensional shape from its amino acid sequence. Now, AI is making a foray into drug development processes. Drug development is a risky, expensive, time-consuming, yet often lucrative venture. The costs in time and money are staggering: A drug can take five years to 15 years to develop and commercialize at a cost of hundreds of millions to billions of dollars.

Drug development comprises four major stages: discovery, testing, review, and postmarket-entry safety monitoring. During drug discovery, different exploration methods are used to assess potential drug candidates and predict which of those options will be most successful for treating a given disease. Drug testing involves taking the top candidates from the previous step and evaluating common drug properties such as absorption and toxicity levels. In some cases, animal models are used for testing. Drug review encompasses clinical development time (phase 1ŌĆō3 clinical trials), in which factors such as drug efficacy and safety are examined through different clinical studies. Finally, during postmarket-entry drug-safety monitoring (phase 4), researchers analyze long-lasting side effects of the drug itself and its administration with other medications. As with many industries, AI-enabled solutions are revolutionizing every stage of the drug development process to accelerate it and improve its efficiency.

Advantages of Using AI
Drug Discovery: Using an AI-enabled approach in drug discovery can be beneficial. An AI systemŌĆÖs ability to churn through large amounts of data enables it to identify patterns and more-predictive indicators of potential new drugs. For example, biotechnology company Berg implemented a patient-centric approach in its study of cancer treatments. Company researchers used an AI system with biological and outcomes data from patients to identify key molecules that are generated during cancer metabolism. That enabled the team to discover a new drug candidate, BPM31510, which is now in phase 2 clinical trials as a treatment for different types of cancer.

Clinical Trials: AI can be used to improve clinical trial procedures conducted during drug review. Major steps include finding appropriate patients for a trial and ensuring medication compliance throughout a study. Finding a sufficient number of patients for phase 3 clinical testing can be difficult because patients must meet a specific set of criteria. Those requirements typically are strict and take into account comorbidities and other factors that can exclude some clinical subjects. Industry analysts have estimated that there were more than 300,000 clinical trials taking place at the end of 2020 (1), making it nearly impossible for doctors to be aware of every trial in which a patient would qualify. It is no surprise, then, that the leading reason for trial termination (at 55% of total trials globally in 2018) is insufficient enrollment (2).

Even if enough trial subjects are found, trial sponsors must ensure that those subjects follow trial protocols fully. A lack of adherence not only can lead to data variability, but it also can have medical impacts and affect a candidate drugŌĆÖs toxicity and/or efficacy. In response, Health IT provider AiCure created an application that uses AI to track a trial participantŌĆÖs drug intake. The application ensures that a patient takes the correct medication properly by recording a video of the patient self-administering medication. In the case of nonadherence, the application helps trial researchers quickly identify and address underlying reasons for misuse.

Intellectual Property Implications for AI Drug Inventions Problematic Scenarios: Because AI is used in the drug development process, there is a real possibility that a drug substance, drug product, or a drug formulation soon will be invented by AI. In such cases, who owns the intellectual property (IP) for those inventions?

Currently, IP protection for AI-created inventions faces legal challenges worldwide. Countries have their own patent-protection laws, and often such protection is difficult or impossible to obtain. For example, both a US district court and the US Patent and Trademark Office (USPTO) hold that only natural persons can be inventors. In one case, the courts rejected two patent applications that named the Device for the Autonomous Bootstrapping of Unified Sentience (DABUS) AI machine as the only inventor (4). The European Patent Office and the United Kingdom Intellectual Property Office rejected corresponding applications for similar reasons (5, 6). However, in July 2021, South Africa issued the worldŌĆÖs first patent in which AI is an inventor (7), and a federal court in Australia ordered the Australian Patent Office to examine a patent application in which AI is an inventor (8).

In countries where AI cannot be listed as an inventor, some patent experts have expressed concerns over how the definition of a person having ordinary skill in the art (POSITA) would have to change if AI is allowed to be an inventor. Proposed claims in a patent application are unpatentable as a matter of law if the invention would have been obvious to a POSITA based on the prior art at the time of filing. Thus, would an AI-created invention be unpatentable because of the AI inventorŌĆÖs use of predictive outcome optimization or because of the sheer quantity of information available to it as training or input data?

The law governing inventorship can be changed. Regardless of todayŌĆÖs legal framework, AI-created inventions have influenced every stage of drug development ŌĆö especially in drug discovery and drug repurposing ŌĆö in most of the world. If AI-created inventions cannot be patented (listing instead the AI inventor), will the owners of such inventions (e.g., biopharmaceutical companies) be interested in pursuing inventions using AI to develop drug products and face the risk that they may not be able to patent the inventions, or should AI inventors not be listed on patent applications? Alternatively, will biopharmaceutical companies protect their inventions as trade secrets, limiting public disclosure that can serve as a stepping stone toward further drug development? In general, patents are considered to be advantageous, at least from a competitive perspective, because they can be used to build a high barrier to market entry. Using AI in drug development can end up being a double-edged sword: identifying new drug candidates on the one hand but failing to provide R&D investment protections on the other.

Potential Solutions: As noted above, patent offices either can omit the AI inventor on patent application filings or name human beings as coinventors. Focusing on human contributions in presented claims can enable biopharmaceutical companies to obtain IP rights for their inventions while matters of legal personhood for AI systems are sorted out by the courts and/or through legislation.

Even if market exclusivity through patent protection remains unattainable because of limited human contributions to an AI invention, biopharmaceutical companies still could obtain exclusivity through the US Food and Drug Administration (FDA). Exclusivity periods range from three to 12 years and are granted when certain statutory requirements are met such as those for biologic, new chemical entity (NCE), pediatric, and orphan-drug exclusivity. Although those options do not offer the same length of market exclusivity as would a patent, they nevertheless grant biopharmaceutical developers more time to recoup R&D investments associated with a drug and enable other market participants to use requisite disclosures as stepping stones to other, further discoveries.

Another option is to keep AI-created inventions as trade secrets. For example, an AI-created drug can be marketed as a ŌĆ£black box,ŌĆØ and the details of the invention can be kept secret. Trade secrets can be established and maintained relatively indefinitely (at least in principle) using internal and external measures to restrict public disclosure of confidential drug information. However, the practical term of trade secret protection can be relatively limited because drug information still will need to be disclosed to the public after testing and FDA approval, which can take seven to 12 years.

Contracts that define who owns IP used and created by an AI system might be the key to settling legal matters. Data used to train an AI system to discover new drugs might not be owned by the company using the AI system to predict new compounds. In such cases, both the entity supplying training data and the companay using those data with its AI system must specify the extent of IP rights and ownership of those rights in relation to the development of new drug compounds.

Protection for AI Inventions
AI systems can reduce time, cost, and failure rates in developing new drugs. However, viable safeguards should be put in place to protect AI inventions for motivating biopharmaceutical companies to invest in AI systems. Lobbying efforts to change the law and allow AI owners to become inventors might be paths to explore.

6 Whether the Requirements of Section 7 and 13 Concerning the Naming of Inventor and the Right to Apply for a Patent Have Been Satisfied in Respect of GB1816909.4 and GB1818161.0. UK Intellectual Property Office, 4 December 2019; https://www.ipo.gov.uk/p-challenge-decision-results/o74119.pdf.

This article reflects only the present personal considerations, opinions, and/or views of the authors, which should not be attributed to any of the authorsŌĆÖ current or prior law firm(s) or to former or present clients.