As BioPhorum authors stated in 2019, ŌĆ£It should come as no surprise to anyone familiar with biomanufacturing that current designs of bioprocess facilities as well as associated manufacturing spaces and support operations require excessive amounts of manual labor and manual interventions that lead to high labor costs and, consequently, total cost to supplyŌĆØ (1). Back then, a realization was starting to take hold in the biopharmaceutical industry that modern robotics showed great potential. However, a cohesive vision of their future in biotechnology was not yet formed. It has taken three years for this vision to develop into the road map described herein.

The Common Milestones
The road map culminates in the possibility of a fully automated cell and gene therapy facility by 2030. These milestones apply to most biomanufacturing facilities and will need to be tacked on the road towards full automation.

If we consider automation to be the doorway to lights-out facilities of the future, then consumables (e.g., vials, flasks, and so on) and their packaging will be the keys to unlocking that door. Only when we understand those consumables will we have full access to automation. This is why the International Society for Pharmaceutical Engineering (https://ispe-dach.org) and BioPhorum groups are working together on standardization to achieve the desired end result.

Start with the Basics: Beginning with mundane functions will help automation provide precompetitive solutions for the whole biopharmaceutical industry. We expect that the most basic of technical advances in automation will be the first to be realized (Figure 1): material transport, sampling, quality control (QC), and packaging. 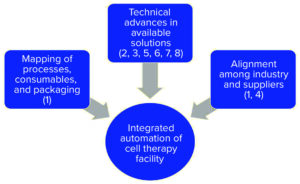 Figure 2:ŌĆéKeys to generic automation in biopharmaceutical facilities of the future; numbers refer to milestones in Figure 1.

If automation of those common functions is not resolved first, then the goal of total automation never will be attained. Such functions often are overlooked in favor of major upstream and downstream processes. But because they involve little to no competitive information, automation of such mundane operations can be reached through solutions that serve the whole industry rather than bespoke strategies for single pharmaceutical companies.

A Range of Benefits: The value of automation will be great. As described in the 2019 paper, excessive workload often gets cited as the main driver for automation (1). However, there is much more to it than the simple desire for cost avoidance. A number of clear drivers are germane to automation in biopharmaceutical manufacturing (2):

The relevance of those drivers depends on each specific process. In general, the industry strives for closed processes. Thus, separation of products from humans recedes into the background as a ŌĆ£given.ŌĆØ By contrast, because many biomanufacturing processes are novel/innovative, the data necessary for their operational optimization is relatively sparse, and the proportion of manual activities is high. Optimization will be enabled by automated documentation systems and data flows, which will be prerequisite to widespread use of robotics. As other industries have demonstrated, such optimization will increase throughput speed, enable increased manufacturing capacities, provide for proactive steering and decision making, and allow for ŌĆ£just in timeŌĆØ stocking, among other features.

The Robotics Road Map to 2030
Core biomanufacturing processes differ among facilities and are likely to elude standardization for some time. Our expectation is that automated stand-alone solutions will continue to grow in parallel until complete (presumably modular) automation and convergence becomes possible throughout.

Milestone 1 ŌĆö Mapping a Packaging Facility from Goods-In to Goods-Out: The first step in automation is neither engagement of mechatronics engineers nor activation of engineering departments; it will start with lean-manufacturing experts in operational excellence. Every time a physical operation is required, it will need to be mapped ŌĆö all the way from ŌĆ£goods-inŌĆØ to ŌĆ£goods-out.ŌĆØ All mundane tasks must be recorded: e.g., removing shrink-wrap from pallets, applying bar codes, opening boxes, and collapsing them for recycling. Once that has been documented, the operations team will be able to step back and consider an entire factory from a lean perspective. When that has been done by multiple pharmaceutical companies, then debate can start on what the industry as a whole needs to do to simplify and automate those processes.

It is becoming obvious that making robot-friendly packaging will be high on the list of early goals. It will open the door to discussions of reducing associated waste across the whole pharmaceutical industry. Packaging will need to be openable by robots for autonomous loading of contents onto manufacturing lines. This goal is not unique to drug companies, so other industries could help provide ideas and solutions for realizing it.

Milestone 2 ŌĆö Using Robots to Pass Materials Between Area Grades: Back in 2019, ŌĆ£Project MarvinŌĆØ was well underway at the National Institute of Bioprocessing Research and Training (NIBRT) in Dublin, Ireland (1). The collaborative project between NIBRT, University College Dublin, and several industry partners sought to develop an automated environmental sample-collection system for bioprocessing environments.

What that project has proven since then was that a mobile robot could indeed carry out environmental monitoring in a pharmaceutical factory. However, it raised concerns related to return on investment (RoI). A mobile manipulator could not enter or leave the room without human intervention to sanitize it, but having such a unit dedicated to every area in a biomanufacturing facility would be too expensive. That issue applies to all mobile robots, thus currently presenting the most significant barrier to their use in such factories.

The US Food and Drug Administration (FDA) was consulted about that problem during the 2022 PDA Aseptic Processing of Biopharmaceuticals virtual conference. Agency representatives recommended that each drug company carry out its own risk assessment regarding potential solutions. Figure 3 illustrates two potential options. 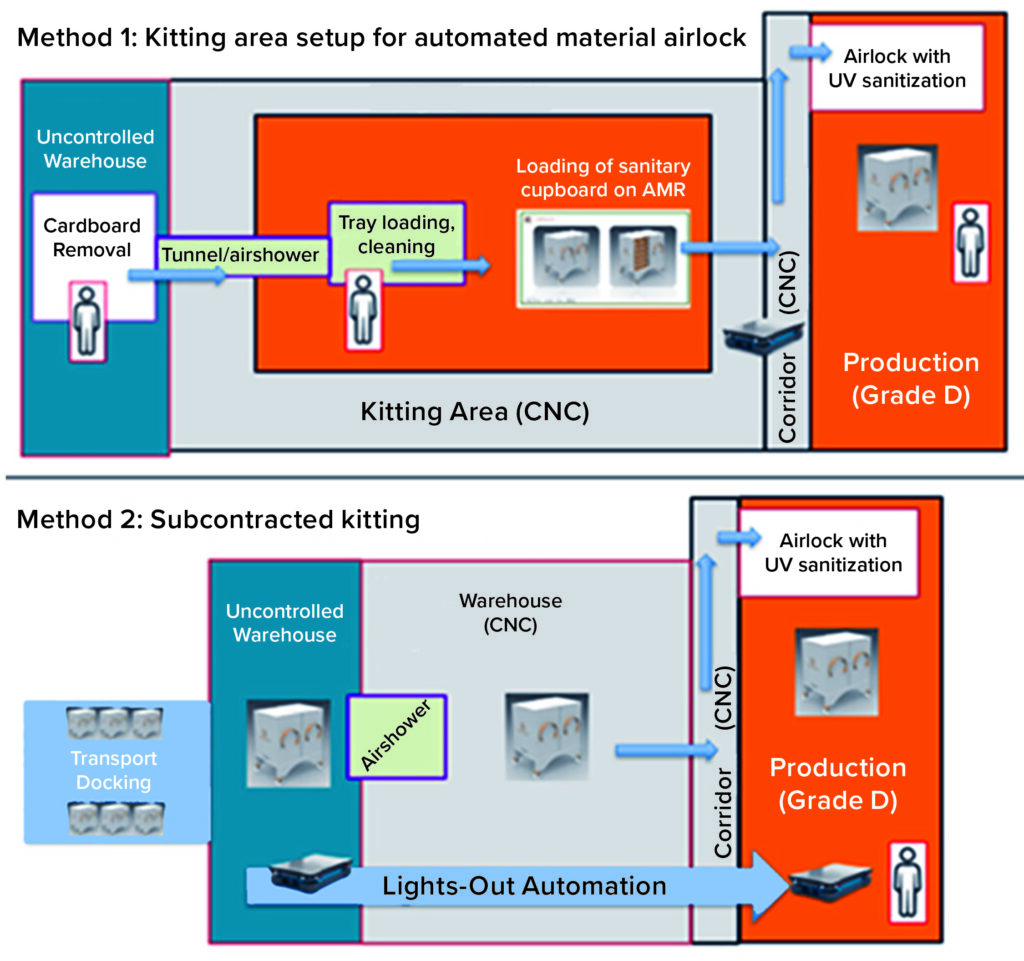 Milestone 3 ŌĆö Mobile Sampling: The pace of progress toward automated sample-taking has been impressive. Available mobile-manipulation technology already is capable of carrying out this task.

Projects are underway at Takeda Pharmaceuticals to automate mobile tube welding, connection of aseptic connectors, and delivery of samples to analytical equipment. Such initiatives will go some way toward automating sampling from single-use mixers, bioreactors, and bags. Through initiatives such as the Andy Challenge, robots could be introduced within the near future that can handle even traditionally challenging navigations such as staircases (3). A new conference was introduced recently ŌĆö and supported by the BioPhorum robotics group ŌĆö to address the topic of applying mobile robots to pharmaceutical processes (4).

It is very likely that in the near future, mobile manipulators ŌĆö e.g., using EMD MilliporeŌĆÖs Novaseptum and Sartorius TakeOne systems ŌĆö also will be able to take samples from stainless- steel tanks. Thus, we are confident that mobile robotic sampling will be possible by 2024. The main problem yet to be resolved here is unlikely to be related to hardware; it most probably will regard the custom coding required to integrate such solutions with laboratory information management system (LIMS), manufacturing execution system (MES), and distributed control system (DCS) requirements.

Milestone 4 ŌĆö Engagement with Suppliers: Following the completion of the first milestone above, the biopharmaceutical industry will be ready to engage with its suppliers about the need to make robot-friendly containers that can reduce packaging waste. At the same time, discussions can begin concerning the potential application of subcontracted kitting. That would enable delivery of consumables in bulk (thus reducing overall packaging use) to a kitting company that would supply local drug companies with kits in reusable containers. Electric vehicles could be used for delivery if such a strategy is adopted.

Milestone 5 ŌĆö Prototype QC Laboratory with Plug-and-Play Mobile Robots: One major challenge is related to user-friendliness in operations and integration of equipment that currently is manual in most QC laboratories. Although no standard solution is yet available, the industry is pushing to get something based on the work of the Standardization in Lab Automation (SiLA) consortium in Switzerland and the OPC FoundationŌĆÖs Laboratory and Analytical Device Standard (LADS). 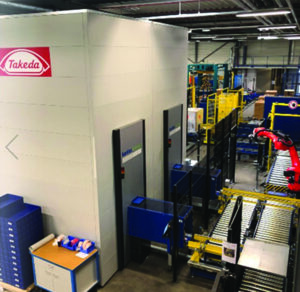 Meanwhile, the Laboratory Automation Plug-and-Play (LAPP) framework already is in development to facilitate plug-and-play mobile robotics (5). We believe that as long as key analytical equipment providers sign up to this program, then 2026 is an achievable target for this goal. The initial step in that direction would be to run QC laboratories overnight using mobile robots for such tasks as loading high-performance liquid chromatography (HPLC) systems. The resulting software standards then could be used for replenishing reagents as well ŌĆö when those are delivered from a warehouse on demand by autonomous mobile robots (AMRs). Note that Takeda already uses AMRs that are loaded automatically with kits stored in a Kardex system (Photo 1).

Milestone 6 ŌĆö Fully Automated Packaging Facility, from Goods-In to Goods-Out: By 2027, a pharmaceutical packaging facility could be operated from a control room. Enabling that requires goods-in automation, cleaning and waste-handling robots, loading of lines, and so on. The complication here is that it normally takes three years to design and build a packaging line. Thus, the industry has only two years for preparing to implement such a project. 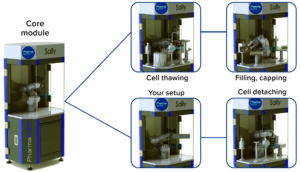 Milestone 7 ŌĆö A Fully Automated Inoculum Laboratory: One project is underway to fully automate an inoculum laboratory using a modular robotic solution (Figure 4). The road-map target for this milestone is 2028, which might seem somewhat conservative. The reason for such caution is that a system will need to prove itself at the research and development (R&D) level first before it can be refitted for biopharmaceutical factories. It is quite possible that the R&D systems could be available within three years. However, a production system would need to comply with good manufacturing practice (GMP) requirements, so we considered it to be prudent to set that goal for 2028.

Milestone 8 ŌĆö Fully Automated Cell Therapy Facilities, from Goods-In to Goods-Out: This will be the most difficult milestone to achieve, but it is also the most important. Cell therapies represent a significant paradigm shift for the pharmaceutical industry; however, the cost of manufacturing them is significant. To become mainstream, such therapies will require significant efforts toward automation in their operations. It is worth clarifying what full automation means in the context of a cell therapy facility. It is unlikely that by 2030 such operations could run entirely from a control room; it is more likely that they will run like QC laboratories, wherein staff work 9:00 am to 5:30 pm, and robots run operations overnight.

Accept the Challenge
It has become obvious that certain issues ŌĆö e.g., packaging and software standards ŌĆö need to be tackled by the biopharmaceutical industry as soon as possible if we want to achieve the vision of a fully automated, robust, and environmentally friendly factory of the future by 2030. We believe that the goals presented herein can be reached ŌĆö but the industry must begin to work toward them today.