Adecades-old technology is finally emerging from clinical laboratories and demonstrating its utility in drug discovery and development. Cell therapy researchers bring their laboratory experiences with them as their science is commercialized. And as biopharmaceutical production engineers incorporate quality by design (QbD) and process analytical technology (PAT) into their work, they find that a method for monitoring the state and distribution of living cells can help build valuable upstream process knowledge.

In flow cytometry, cells are suspended in fluid to flow along in single file through a laser beam. That light is scattered in patterns that provide information about the cells and their components. Sometimes fluorescent labeling — which absorbs and then reemits light at different frequencies — provides another dimension of analysis. When the scattered or emitted light is detected, it can be interpreted to describe the size and molecular characteristics of individual cells. With computer help, thousands of them can be examined each minute.

Flow cytometers evolved from advancements in several fields: microscopy, dye chemistry, electronics, laser optics, and computers. The first flow-impedance cytometry device was patented by Wallace H. Coulter in 1953 (1). He gave his name to the “Coulter principle,” which uses an electric field for counting and sizing dilute suspensions of particles in conducting liquids. In 1965, Mack Fulwyler advanced the technique for cell sorting. 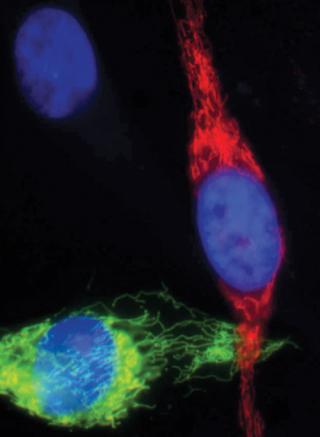 Originally known as Impulszytophotometrie (German for “pulse cytophotometry”), the first fluorescence-based flow cytometry device was developed in 1968 by Wolfgang Göhde at the University of Münster (1). He patented it in 1968, then licensed it for commercialization in 1969 to German company Partec (through Phywe AG in Göttingen, Germany).

In 1971, the Cytofluorograph instrument was introduced by Bio/Physics Systems Inc. (now Ortho Clinical Diagnostics, a Johnson & Johnson company). Partec/Phywe offered its PAS 8000 system in 1973. Becton Dickinson and Company put forth the first fluorescence-activated cell sorting (FACS) machine in 1974; Partec/Phywe introduced its ICP 22 FACS instrument in 1975; and in 1978 the Epics system arrived from Coulter (now Beckman Coulter).

By then, scientists had agreed on flow cytometry to replace the original German termin (1). And Becton, Dickinson and Company trademarked the FACS acronym, making BD Biosciences the first name most scientists think of when considering the technology. However, many other companies supply their own flow cytometry systems: Applied Biosystems, Beckman Coulter, EMD Millipore, Partec, and Stratedigm, to name a few. Others such as Morphosys’s AbD Serotech company and Invitrogen’s Molecular Probes division provide a broad range of labeling options as well as excellent online resources (2, 3). And software companies such as Applied Cytometry focus on data analysis.

Flow cytometry is most routinely applied in diagnostic laboratories, especially for identifying blood cancers. But it has many other applications such as cell counting, sorting, biomarker detection, and protein engineering. For example, it can physically sort particles based on their measured properties, thus safely purifying cell populations of interest.

Cell therapy developers need cell-separation technologies that can speed up their processing work while complying with good manufacturing practice (GMP) requirements. Current methods involve density gradients, magnetic separations, and flowcytometry to prepare cells for clinical use, with the potential for chip-based technologies on the way (4).

Stem cell researchers, for example, use biomarkers and flow cytometry to track cellular differentiation and cell-fate specification (5). The technology helps to identify and sort rare cells among millions of others present in living tissues — e.g., dendritic cells cirulating in blood. Multiparameter analysis of cell state and viability assessments are useful in this work and in production process development for biologics (described below).

In the era of QbD and risk management, process knowledge and understanding are vital components of a biologics manufacturer’s regulatory compliance tool box. And in the dawning age of biosimilars, highly specialized production cell lines will be an increasingly important piece of the intellectual property puzzle for both innovators and follow-on companies alike. Enter flow cytometry.

In time, it became clear to many scientists that flow cytometry’s ability to detect the presence of specific molecules as well as determine valuable information about living cells in suspension could apply in bioprocess development. Cell count, growth, and viability are the most common assays for expression system development, media design, and culture monitoring (7). And bioassays are vital to biopharmaceutical product development. A casual review of past BPI articles listed in the box above will provide examples of how process engineers and scientists have adapted methods formerly used in “pure research” for such purposes. For instance, and InDevR’s Virus Counter (VC) flow cytometer was designed specifically to directly quantify virus particles (8).

Flow Cytometry in the BPI Archives

In 2007, a BPI supplement addressing bioreactor process monitoring and control had this to say about flow cytometry:

Among the newer technologies for cell viability are automated flow cytometry systems that measure both bioreactor cell concentration and individual cell viability (based on propidium iodide exclusion, for example) every 30 minutes. Results have been shown to correlate well with traditional hemacytometer counts. Multiparameter flow cytometry measures several physiologic parameters of many cells, enabling the assessment of population heterogeneity by many criteria. Such data, if of sufficient quantity and timeliness, may lead to new approaches in modeling and control applications, including the possibility of truly structured and segregated approaches (9).

Questions do come up when a laboratory must support GMP operations, but savvy flow-cytometry instrument suppliers will be able to provide answers. This is the next step for them to expand their business and help advance biotechnology for improved patient care.

In 2008, the first of what has become a biennial conference brought together scientists working with flow cytometry for biopharmaceutical applications at AstraZeneca’s R&D facility in Charnwood, UK (10). A one-day event attended by 100 people, it nearly tripled in size at a GlaxoSmithKline location in 2010, then grew again when it returned to AstraZeneca for 2012 (11). This illustrates the expanding applications of the technology. Speakers highlighted uses for lead generation (high-throughput and high-content screening), monoclonal antibody and fragment analysis, drug attrition (safety and secondary pharmacology), stem cell research and therapy, biomarkers (method validation, clinical study support, and cell-based assays), phenotypic screening (complex and cell-based assays), and personalized medicine.

BPI and BioTechniques Come Together with BD Biosciences

In bioprocess engineering, flow cytometry offers a powerful tool to monitor cell populations in real time at the single-cell level. The population of cells used for bioprocessing (biomass) can range from small volumes in research laboratories to very large volumes in industrial settings. Biomass monitoring is crucial to optimizing growth conditions.

BPI’s editor in chief, Anne Montgomery, moderated a joint webinar on this topic in summer 2012, working with BD Biosciences and our sister publication BioTechniques. The two speakers were Christian Lavarreda (product manager for pharma and biotech equipment and services at MSP Corporation) and Friedrich Srienc (professor of chemical engineering and materials science at the University of Minnesota’s Institute of Biotechnology).

Those speakers discussed how an interface between bioreactors and flow-cytometry analyzers makes automated, real-time bioprocess control possible. They demonstrated how that provides highly detailed data on the dynamics of cell populations, enabling an unprecedented degree of bioreactor monitoring resolution and control.

Finally, they discussed how automated flow cytometry can be used to maintain cultures in a steady-state condition of low cell density (cytostat), in which a selection condition is precisely defined by the feed medium. Faster-growing, robust mutants are then easily detected when growth conditions match an optimal isolation strategy. Continuous cytostat cultivation offers a powerful method for rapid development and evolution of desired production strains.