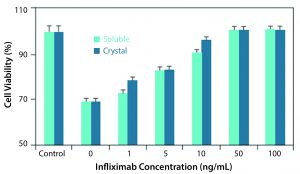 Figure 1: Comparison of soluble and crystalline infliximab in an in vitro bioactivity assay

Monoclonal antibodies (MAbs) have become important therapies and are projected to generate US$125 billion in sales by 2020 (1). Given that potential revenue, biopharmaceutical companies are highly motivated to find novel ways to deliver their drug products and extend patent lifetimes. Many such therapies are administered intravenously at low concentration and large volumes (2). 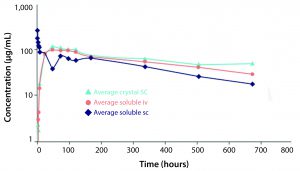 Altheaâ€™s Crystalomics technology facilitates delivery of traditional biotherapeutics with high concentration, low viscosity, and low volume by arranging a drugâ€™s individual molecules in an ordered crystal lattice. The technology is a portfolio of patents surrounding crystallization, crosslinking, and complexation of proteins for therapeutic use. It includes know-how for finding ideal crystallization conditions and stable crystalline formulations as well as technologies to develop goodÂ manufacturing practice (GMP) processes for crystalline-suspension drug products. For patients, this allows for increased comfort using smaller needles through a subcutaneous injection rather than a lengthier intravenous infusion. Protein crystals produced with the Crystalomics platform also can be conjugated to obtain sustained-release properties, transforming daily treatments into weekly ones. The in vitro and in vivo efficacy profiles of crystalline therapies have proven to be just as effective as their soluble, larger-volume counterparts (3) (Figures 1, 2).

Formulation Development
In developing crystal drug-product suspensions for our client collaborators, we encounter several challenges (4). Excipients must be adjusted from the mother liquor crystallization solution into a formulation that is suitable for patient injection and contains ingredients that are generally recognized as safe (GRAS). Crystals that dissolve, aggregate, or are unstable are of no use. During formulation of crystal suspensions, the zeta potential of the crystals in a formulation buffer is of special note. Particles with a zeta potential under â€“25 mV or over +25 mV tend to repel each other and remain separate due to electrostatic repulsion (5).

Particle Characterization
Once several formulation candidates are identified, an extensive biophysical characterization of the crystal suspension for each candidate begins. MANTA Instruments, Inc.â€™s ViewSizer 3000 instrument allows formulators to capture particle-size distribution (PSD), rate of crystalline formulation, rate ofÂ dissolution, and (soon) zeta potential, all with only 1â€“2 mL of sample required. By combining several critical assays into a single measurement, this system has proven to be invaluable for conserving time and sample. 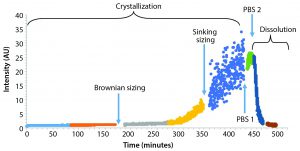 The ViewSizer 3000 system is an advanced instrument for particle counting and sizing. It tracks particle Brownian motion (nanoparticle tracking analysis, NTA). Unlike conventional NTA that uses one laser (one wavelength) to illuminate particles in the colloid, the instrument incorporates a patent-pending system of three solid-state lasers with wavelengths of 450 nm, 520 nm, and 650 nm (typically), which match sensitivity profiles of the color video camera. By varying the power of the lasers (typically, blue has effective power inside a sample cuvette of 70 mW, green has 12 mW, and red has 8 mW), users can extend the range of particle sizes that the software can easily observe and track. That overcomes the basic drawback of conventional NTA: inability to size particles that form polydisperse samples. It turns out that such varying powers at different wavelengths also are crucial for detecting particles that change their size in time because of crystallization or dissolution. 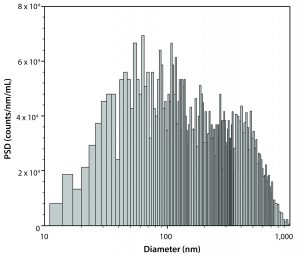 Typically, samples for Brownian sizing require particles that are round with a ratio of ellipsoidal axis of <3 (this limitation stems from the assumptions of Einsteinâ€™s theory of Brownian motion). Viscosity of diluent should be less than about 4 cP. (An overly viscous diluent prevents measurable Brownian motion (Figure 4). The detection limit for particles in water that has viscosity of about 1 cP is <2 Î¼m in diameter.) The refractive index of particles should be different from that of a diluent to achieve enough light scattering on particles. (Typically, refractive indices of >1.4 for particle-forming colloids in water n = 1.33 are considered good enough).

Figure 5: Composite of 300 video frames (7.5 s at 40 fps) of one video recorded at about 5.5 hours shows both smaller particles that undergo Brownian motion and very large ones that sink with a constant speed. By using the Stokes equation and known density of crystals, we can estimate that the diameter of the larger particles was more than 10 Î¼m. Concentration was about 1.1 Ã— 106 particles/mL.

Experiment
Figure 3 shows an experiment of crystallization and dissolution that lasted about 8 h. During the first few hours, the rate of sample crystallization was very slow. After about 180 minutes of constant mixing of the colloid, we measured particle-size distribution by tracking the particlesâ€™ Brownian motion. Results showed a profile with a D50 particle diameter of 338 nm and a total particle concentration of about 2.5 x 107 particles/mL. After nearly 300 minutes of the crystallization, the rate of crystallization increased considerably. Concentration and size of the largest particles (>5 Î¼m in diameter) were sufficient to have particle size measured based on sinking speed (Figure 5).

After about 420 minutes, we added 1Â mL of standard phosphate-buffered saline (PBS) into 2 mL of colloid, which stopped the process of crystallization. Addition of another 1 mL of PBS at 440 minutes into the experiment started quick dissolution of the particles. Figure 6 is an expanded version of the dissolution section from the initial figure.

We tracked the whole process of crystallization and dissolution automatically by observing varying intensity of scattered light recorded by the camera of the Brownian sizing instrument and processed by the standard ViewSizer 3000 software. This analysis included the length of recorded videos (typically several frames every few seconds, with mixing of the sample between videos), speed of mixing (revolutions of a stirrer per minute), control of the colloidâ€™s temperature within 0.1 Â°C, and recording average totalÂ intensity of recorded images (frames) for each video as a time series.