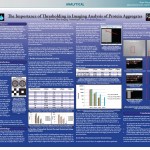 Dynamic imaging particle analysis (DIPA) shows much greater sensitivity to transparent particles, such as protein aggregates, than light obscuration can. While not yet fully accepted in industry compendia, DIPA is being used increasingly in the formulation process for characterization of sub-visible particulates in biologics. DIPA measures particle size and shape by first creating a binary image based upon a defined threshold from the background value for each pixel in the image. The resulting binary image is used for all particle measurements, so the choice of thresholding technique is critical to the validity of the measurements.This poster will demonstrate how different thresholding techniques can produce dramatically different characterization of protein aggregates. To do this, a base set of camera images are acquired for a therapeutic protein containing aggregates. These “raw images” can then be run through image processing software using different thresholding techniques to quantify and measure the aggregates contained. By using the same set of images for each thresholding process, we insure that any variation in results can only be caused by the thresholding process. The results will show striking differences caused by the thresholding variation, thereby supporting the importance of proper thresholding when using DIPA.