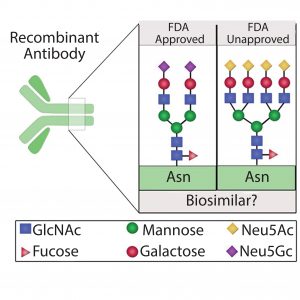 Figure 1: Different protein glycoforms; recombinant proteins expressed for use as biosimilars might not be FDA approved because of variation in protein glycosylation patterns that potentially alter protein structure, stability, and activity

The global market for biotherapeutics has expanded extensively over the past decade and is projected to account for more than a quarter of the pharmaceutical market by 2020, with sales exceeding US$290 billion (1). Continued expansion of the biosimilar marketplace has led to many commercial opportunities and technical challenges. The biological systems used to manufacture such drug products are inherently variable â€” a feature that has important consequences for the reproducibility, safety, and efficacy of the resulting products. Therefore, a prerequisite for introducing such biologics into routine clinical use is to ensure consistency of lot quality. Process understanding and consistency are critical because slight changes can lead to adverse effects such as immunogenicity, with potentially serious safety implications. In generating biosimilars, it is crucial to ensure that all clinically active attributes of the biotherapeutic, including protein posttranslational modifications (PTMs), are accounted for and confirmed (2).

One such PTM that must be carefully monitored is protein glycosylation, which is the attachment of carbohydrates to a protein structure. That occurs within either the endoplasmic reticulum (ER) or the Golgi apparatus of a cell (GA) (3â€“5). Because those glycosylation mechanisms depend on factors such as cellular host, glycotransferase expression, substrate specificity, and substrate availability, different glycoforms of a single protein can be generated (3). Protein glycosylation
can be a critical quality attribute for proteins used in discovery and biotherapeutics because it often plays a key role in their efficacy, safety, stability, and functionality (6â€“10). Thus, regulatory agencies stress limited variability and note the importance of maintaining uniform glycosylation patterns during manufacturing and scale-up as well as for bioequivalence studies. As the market for protein biologics and biosimilars continues to expand, the need for generating homogeneous protein glycoforms through recombinant technology is of paramount importance (Figure 1). Herein, we identify possible strategies to mitigate glycosylation variability that can be used in generation of uniform proteins for discovery, therapeutics, and bioequivalents.

Cell Line Variation
During the discovery phase of a process, one of the first considerations for biotherapeutic protein production is the choice of host cell. Several host systems can be used, including Escherichia coli, yeast, and insect and mammalian cells. Ultimately, the choice depends on the complexity of a protein and required structural components to ensure activity, stability, efficacy, and quality. A number of review papers cover the individual benefits of each host system (11â€“14).

During discovery, several hosts can be screened to determine which will offer better protein yield, functionality, recoverability and overall quality. Organisms such as E. coli express proteins that have relatively simplistic folding requirements (e.g., lack of disulfide bridge formation, carbohydrate attachment, and lack of cofactor processing events). Although E. coli serves a limited role in the common production of proteins for discovery and commercial development, this system provides the unique opportunity of overexpressing quantities of raw polypeptide that can be refolded with varying results.

As an alternative, generation of biologically active proteins that require in vivo folding can be produced in yeast and baculovirus-infected insect cells (15). Yeast is capable of PTMs but typically results in high-mannose N-glycosylation (in the form of hyperglycosylation) and not complex-ordered glycan attachment. If the glycosylation profile is not critical, yeast often can be a cost-effective and faster-growing and faster-producing host. However, yeast produces high levels of proteases, which can adversely affect product yield through protein degradation (16).

In attempts to generate proteins for discovery research and biotherapeutic application, mammalian cell recombinant expression can produce proteins that correctly mimic properties found within a human patient. Traditionally, mammalian cells have been the most commonly used hosts for producing glycosylated proteins such as monoclonal antibodies (MAbs) and enzymes, with many licensed products expressed by Chinese hamster ovary (CHO) cells. Because mammalian cells are more likely to produce proteins that are properly folded and contain the correct PTMs, the use of such cells presents several advantages over the alternative hosts discussed above. However, production from mammalian cells often is hindered by slower growth rates, lower protein yields, and higher costs of production. In addition to CHO, other mammalian cells used often include human embryonic kidney (HEK 293), myelomas such as NS0 mouse myeloma, hybridomas, baby hamster kidney (BHK), and PER. C6 human retinal cells (15). Because the origins of these cell lines vary, they can exhibit differences in cellular growth, protein production levels, and glycosylation patterns that must be considered by companies selecting host cells.

Further complicating the choice of host system, cell lines generated from clones can exhibit different glycosylation patterns. Therefore, several clones will be generated during discovery using a chosen host(s) and screened for protein production and quality (14, 18â€“22). As the fields ofÂ biosimilars and therapeutic proteins grow, regulatory agencies are placing greater emphasis on controlling critical protein attributes such as glycosylation patterns. Therefore, when choosing a clone, it is necessary to ensure that the correct glycosylated protein is produced, even if production levels are not optimum. It is also beneficial to confirm that production in constitutive expression remains stable over the course of many generations, not only while establishing cell lines from individual clones, but also subsequently during development of the final manufacturing process.

Media Supplementation
Components within a medium can affect protein PTMs (9). One method that has been investigated to gain greater control of protein glycosylation is supplementation of the media with diverse small molecules such as sugars, amino acids, and trace elements. For example, media supplementation with 25 mM glucose (a main energy source for cells) enabled production of chimeric MAbs exhibiting increased rates of glycosylation and greater homogeneity of the protein glycoforms (23).

Different studies have been performed to regulate growth, protein production, and accumulation of lactate in cell cultures by using alternative sugars such as galactose and fructose, which are slowly metabolized. Using those sugars also can affect protein glycosylation. In one study, researchers found that complete substitution of glucose with galactose or fructose resulted in high-mannose forms of glycan in CHO cultures producing IgG (24). As expected, when cells were fed glucose and galactose simultaneously, that percentage dropped. In a second study, supplementation of media with monosaccharides (such as galactose and glucosamine) and the nucleotide uridine led to drastic increases in the sialylation of human cytokine interferon gamma when recombinantly expressed in CHO cells (25).

Similar to augmenting the sugar concentration within media, spiking amino acids into the media can affect recombinant protein glycosylation greatly (26). Cellular respiration leads to the accumulation of ammonia, which can be toxic to cells and can alter recombinant protein glycosylation (27â€“29). To reduce ammonia generation, researchers often substitute glutamine with glutamate (30). And supplementation of media with proline, threonine, and glycine can mitigate the toxic effects of ammonia production and result in increased sialic acid and N-acetylglucosamine content of recombinantly expressed tissue plasminogen activator (t-PA), a protein drug used to treat stroke patients (29, 31). In a separate study, addition of asparagine to cell culture media altered the glycoforms of recombinant proteins. Such glycoform variation has been hypothesized to result from the need for asparagine in N-linked glycosylation and mitigation of toxic ammonium effects within cellular metabolism (32).

Addition of cofactors such as metal ions also can affect protein glycosylation significantly. Metals such as iron, cobalt, and copper have been added to cell culture media and were all shown to alter glycosylation levels of diverse proteins in unique cell lines (33â€“35). Similarly, supplementation of culture media with exogenous manganese can increase sialylation of human erythropoietin, a protein hormone used to treat anemia. That escalation in protein sialylation increased protein half-life within human serum and enhanced efficacy (36). Furthermore, the addition of manganese chloride along with uridine and galactose to cell culture media drastically increased the galactosylation of recombinant antibodies produced in CHO cells. Those results indicate that supplementation of cell culture media with certain supplements can have synergistic effects in enhancing production of a particular protein glycoform (37). Using that information, researchers demonstrated that galactosylation of recombinant monoclonal antibodies expressed in unique CHO cell lines can be controlled using those additives in specific ratios (38).

Key to Biosimilars Approvals
As the use of biotherapeutics continues to expand within the pharmaceutical marketplace, the development of biosimilars represents great potential for vast expansion within the industry. Imperative to the use and approval of these biosimilars is the understanding of protein glycosylation and the production of particular glycoforms. Although the generation of specific protein glycoforms remains poorly understood, the limited scientific data that we have indicate the need for a highly customized approach when producing biosimilars through recombinant technology. Production of precise protein glycoforms will demand specific cell lines and unique cell culture media formulations consisting of exceptionally defined reagents. With the market of biosimilars greatly expanding within the next decade, understanding protein glycosylation variability and the requirements necessary for generating specific biosimilars will be imperative to gain FDA approval and to address the needs of this new era of pharmaceuticals.

23 Liu B, et al. The Availability of Glucose to CHO Cells Affects the Intracellular LipidLinked Oligosaccharide Distribution, Site Occupancy and the N-Glycosylation Profile of a Monoclonal Antibody. J. Biotechnol. 170, 2014: 17â€“27.