Contract development and manufacturing organization (CDMO) Fujifilm broke ground on a 31,778 square-foot extension at its site in Research Triangle Park, Morrisville, North Carolina, which will add recovery and purification suites to support biomanufacturing. 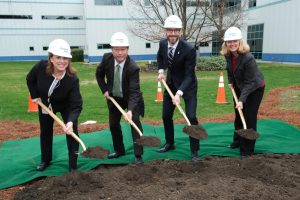 The expansion represents an investment of around JPY 6 billion ($54 million), Fujifilm spokeswoman Christine Jackman told this publication, and forms part of a JPY 10 billion investment plan announced in January 2019 to bolster the Morrisville plantŌĆÖs biomanufacturing capabilities.

ŌĆ£Fujifilm has made several announcements on investments to grow its bioCDMO division, of which this expansion is one of them,ŌĆØ she told us. ŌĆ£All of our investments have the goal of supporting the ever growing pipelines and needs of our customers.ŌĆØ

She added the CDMO will determine the needs for increased staffing once the expansion of the facility is complete in mid-2021.

Fujifilm rebranded its CDMO business┬Āin 2017. At the time, it said it hoped to achieve sales of JPY 100 billion/ $1 billion by 2024 ŌĆō almost four times its 2016 revenue ŌĆō by achieving a high level of business growth through significant capital investments to reinforce the companyŌĆÖs capabilities. The firm invested $130m into its global CDMO business┬Āin 2017 before announcing the JPY 10 billion last year.