Merck & Co. is eying up the acquisition of antibody-drug conjugate (ADC) Seagen, according to media reports.

The Wall Street Journal reported late last week that Merck has been in talks regarding a potential acquisition of Seattle, Washington-headquartered Seagen for a while, though a deal is not expected to be imminent.

However, such a deal â€ścould make sense strategically,â€ť according to SVB Securities analyst Andrew Berens. 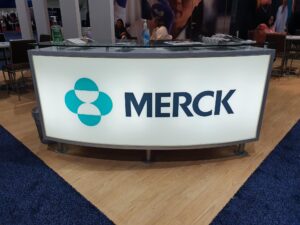 â€śWe believe that there are synergies in the Seagen portfolio (three commercial assets and extensive pipeline) that may pair well with Merckâ€™s assets, especially Keytruda (pembrolizumab),â€ť he wrote in a note.

Seagen (previously Seattle Genetics) is a pioneer in the antibody-drug conjugate (ADC) space, having brought four of the 12 commercially available products to market â€“ the latest being Tivdak (tisotumab vedotin) for the treatment of adult patients with recurrent or metastatic cervical cancer.

Seagen has also built up its manufacturing network, with a $350-400 million greenfield biomanufacturing site in Everett, Washington under construction set to accompany its existing site in nearby Bothell.

An acquisition by Merck would bolster its oncology portfolio and pipeline, something which fits with the firmâ€™s strategy going forward.

â€śWe’ve made it very clear. Our goal is to be the leader in oncology by 2025 and then to sustain that leadership well into the next decade,â€ť Merckâ€™s CEO Rob Davis told stakeholders at the Goldman Sachs 43rd Global Healthcare Conference last week.

â€śWe will continue to drive our own pipeline, continue to deepen, to broaden and extend the pipeline we have, and I do believe there continues to be real opportunities from the business development in that specific arena to add to our portfolio.â€ť

Seagen and Merck are already partnered for small molecule combination tablet Tukysa (tucatinib) and for the ADC candidate ladiratuzumab vedotin.