Roche made a splash with its acquisition of Spark Therapeutics, whose Luxturna (voretigene neparvovec), a gene therapy for an inherited form of vision loss, was the first such therapy to win FDA approval.

Dyno, a two-year-old startup based in Cambridge, Massachusetts meanwhile, has never brought a gene therapy to the market, nor does it currently have its own drug pipeline. What it does have is a platform technology for engineering the viruses that ferry gene therapies to their cellular targets. Going further, it can design the capsids, the protein shells of these viruses that envelop a gene therapy and deliver it into the cells of a target organ or tissue in the body. 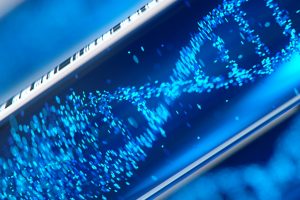 Roche sees enough promise in the Dyno technology to pay the Harvard University spinout a bit of cash now and potentially a lot more later. The companies arenŌĆÖt disclosing the amount of the upfront payment or how many therapies are covered under the partnership announced Wednesday. But depending on the progress of the therapies, they say DynoŌĆÖs milestone payments could top $1.8 billion.

Gene therapies that have reached the market so far, such as Luxturna and Zolgensma (onasemnogene abeparvovec), a Novartis treatment for spinal muscular atrophy, are delivered by engineered adeno-associated (AAV) viruses. But AAV capsids, as theyŌĆÖre found in nature, have limitations, says Eric Kelsic, DynoŌĆÖs CEO. Some of them arenŌĆÖt suited for delivery to certain tissues. Others may spark an interaction with the immune system.

There are ways to engineer capsids to make them better suited for a particular cellular target or disease. But Kelsic says improving one property of a capsid can have the effect of altering another one, potentially rendering the capsid ineffective. Dyno aims to improve on capsid design by applying machine-learning techniques and artificial intelligence technology to the process. The biotech automates analysis of data from experiments involving AAV capsids, looking for patterns. The technology screens hundreds of thousands of capsids at one time, looking for desirable properties, such as its ability to target specific tissue, payload capacity, interactions with the immune system, deliverability, and manufacturing. The more data the system analyzes, the better it gets.

In addition to analyzing how a capsid is delivered to a target cell, the technology also analyzes where else in the body it goes. That information helps Dyno learn about potential off-target effects of the therapy. Dyno calls its technology CapsidMap. Kelsic says the company aims to build an map that shows which capsids are best suited for particular diseases, as well as which capsids are best for addressing particular cells or organs. Dyno was an Xconomy Awards 2020 winner in the ŌĆ£Startup of the YearŌĆØ category. Kelsic talks about his companyŌĆÖs technology in this┬Āvideo┬Ā(DynoŌĆÖs portion starts at 3:47)

ŌĆ£If you improve delivery, efficiency, it means you can treat the same patient just as well but at a much lower dose,ŌĆØ Kelsic says. ŌĆ£ItŌĆÖs a safer, better tolerated, potentially longer-lasting therapy. And because itŌĆÖs a lower dose, you can treat more patients per batch.ŌĆØ

Spark TherapeuticsŌĆÖs Luxturna won FDA approval in 2017. Two years later,┬ĀRoche acquired Spark for $4.8 billion. In addition to other eye disorders, the Spark pipeline spans liver diseases and CNS disorders. The most advanced Spark program, SPK-8011, is expected to enter Phase III development next year for hemophilia A. The drug is in development under a partnership with Pfizer.

Though the Roche alliance with Dyno calls for the startup to use its technology to design capsids for CNS and liver gene therapies, the companies arenŌĆÖt specifying which diseases are covered by the pact. Dyno will use its technology to design capsids and Roche will supply the genetic payloads that they will carry. Roche will handle preclinical and clinical development of the gene therapy candidates, as well as commercialization if theyŌĆÖre approved.

The structure of the deal is similar to alliances with Novartis and Sarepta Therapeutics that┬ĀDyno unveiled in May, when the startup emerged from stealth. The Novartis pact is focused on gene therapies for eye diseases while the Sarepta agreement aims to develop therapies for muscle disorders.

One thing that Dyno does not yet have is an internal pipeline of gene therapy candidates. Kelsic says his company has been focused on building its technology. He wonŌĆÖt rule out Dyno pursuing its own gene therapies in the future, but he says that the company is also looking for more partners that can help take the companyŌĆÖs technology to more diseases in more parts of the body.