The company confirmed in December 2021 that ÂŁ400 million ($443 million) of a previously announced investment would be spent expanding its contract development manufacturing organization (CDMO) operations in Billingham.

Now, Fujifilm has broken ground at the location and says it will include over 20,000 square feet of modular clean room space, as well as two purification suites, a column packing room, refolding suites, and two primary recovery suites. 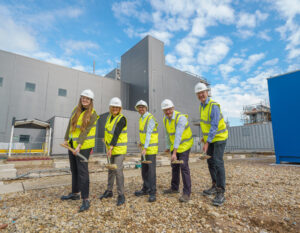 According to the CDMO, the space has been designed to maximize its emerging continuous manufacturing platform, SymphonX1, for both clinical and commercial manufacturing.

The expansion is expected to be complete late next year / early 2024, and Fujifilm claims the production capacity of the microbial manufacturing facility will increase by 70%. Additionally, the finished expansion is anticipated to create up to 350 highly skilled jobs.

The firm has made various investments to up its CDMO capabilities and has been spending heavily across its biomanufacturing network over the years.

In June, it invested $1.6 billion to expand its cell culture manufacturing offerings at its HillerĂ¸d facility in Denmark and across the Atlantic at its single-use campus in College Station, Texas. This decision to expand came just nine months after the CDMO broke ground on a $1.8 billion greenfield facility in Holly Springs, North Carolina, set to offer a further 160,000 L of biomanufacturing capacity when operational in 2025.

In June 2021, Fujifilm forked out $850 million into its CDMO business to double cell culture production for recombinant vaccines in the US and increase gene therapy production in the UK ten-fold.

The firm also said it would up capacity at its Teeside, UK site to increase gene therapy production ten-fold, while also tripling cell culture capacity and doubling microbial fermentation output at the existing 5,000 L scale.