CDMO Samsung Biologics is preparing to construct a fifth biomanufacturing facility after acquiring 10,000 m2 of land in Songdo, Korea.

In 2020, Samsung Biologics laid plans for a fourth ŌĆśsuper plantŌĆÖ at its site in Songdo, Incheon at a cost of over 2 trillion Korean wonŌĆöroughly equivalent to $2 billion.

Construction of the facility, which will house 256,000 liters of mammalian production capacity, is underway but in the meantime the contract development and manufacturing organization (CDMO) has made a move to build a fifth plant. 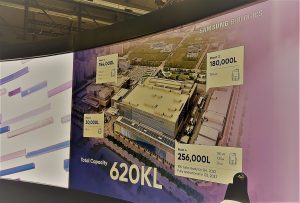 Samsung Biologics is exhibiting at CPhI Worldwide in Milan, Italy this week

According to the Korea Herald, Samsung Biologics bought 10,000 m2 of land in Incheon last week and is set to construct a biomanufacturing facility on the site.

Samsung Biologics confirmed the transaction to BioProcess Insider, though a spokesperson said further details regarding the ŌĆ£multi-modalŌĆØ plant ŌĆō including the cost, which the Korea Herald placed at 306 billion won ($260 million) ŌĆō is yet to have been decided.

In its 10-year history, Samsung Biologics has rapidly grown its manufacturing capacity to keep up with demand from the biologics industry. Even without the fourth plant online, the firm boasts a total of 364,000 L of mostly stainless-steel bioreactor capacity.

The CDMO has also announced plans to┬Āadd mRNA capacity at its site following success for the modality in response to the COVID-19 pandemic ŌĆō though financials of this expansion have not been divulged ŌĆō and has spoken of its ambitions to go from a CDMO to a top tier pharmaceutical company.

Such expansion comes off the back of record revenues for the firm. According to its Q3 2021 financials last month, sales were up 64% year-on-year to 450.7 billion won ($375 million) for the quarter, due to increased demand for CDMO services and increased utilization at its third plant. The firm also reported early lock-in of capacity at plant number 4, which is set to be fully GMP-ready in the second half of 2023.