After two years away, BioProcess Insider attended the highly anticipated presentation at PhacilitateŌĆÖs┬ĀAdvanced Therapies Week in Miami, Florida, where Susan Nichols (CEO of Propel BioSciences) highlighted 10 moments from 2021 that defined and drove the cell and gene therapy (CGT) space.┬Ā

Some unexpected milestones made the list, such as the arrival of messenger RNA (mRNA) and talent retention concerns, but it was advancements in the line of treatment for CAR-T therapies that topped NicholsŌĆÖs roundup. 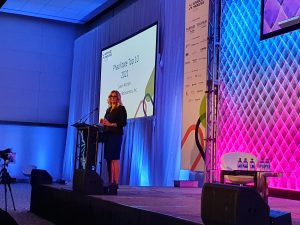 ŌĆ£I remember the conversations on how we were ever going to get autologous cell therapy into the mainstream with [such] a long development process. Now we’re at two days, what can we accomplish next?ŌĆØ said Nichols.┬Ā┬Ā

Prime Medicine emerged from stealth mode with $315 million in 2021. Gene-editing start-up Metagenomi closed a $65 million Series A funding in November (and closed a $175 million Series B funding this month) and in the same month, Chroma Medicine received $125 million. ┬Ā┬Ā

Nichols described such examples of multi-million-dollar funding as ŌĆ£hugeŌĆØ and proof that gene editing ŌĆ£is not just here to stay, but the foot is on the gas pedal and weŌĆÖre going full force to see what we can accomplish next.ŌĆØ┬Ā┬Ā

mRNA has become mainstream and a household name over the last two years with the success of BioNTechŌĆÖs and ModernaŌĆÖs COVID-19 vaccines. mRNA technology now stands as proof of a fast and effective delivery vehicle; the result of the extreme push to get jabs into arms.┬Ā┬Ā

Now, we see a future for mRNA use beyond COVID-19, with the likes of BioNTech building upon its success with cancer vaccines, which were ŌĆ£originally supposed to take two and a half years for a Phase I trial and are now down to 18 months,ŌĆØ according to Nichols.┬Ā

Meanwhile, Moderna has reinvested some of its COVID-19 cash to partner with Carisma Therapeutics to make and commercialize in vivo engineering chimeric antigen receptor monocyte (CAR-M) therapeutics to treat various forms of cancer.┬Ā┬Ā

In June, Regeneron and Intellia Therapeutics showcased clinical trial data for its CRISPR therapy to treat Transthyretin (ATTR) Amyloidosis, which can lead to heart disease by depositing protein in your nerve endings, heart, and other organs. The results showed a reduction of 87% in disease-causing protein after one single infusion of NTLA-2991.┬Ā

This is the first clinical data available supporting safety and efficacy of in vivo CRISPR/Cas9 based therapeutics, which drives the safety profile as there were no adverse events and Nichols celebrated that ŌĆ£this data helps fuel investment in all gene-editing platforms.ŌĆØ┬Ā

Nichols described bringing CGTs to a wider patient population as one of her missions in life. The American healthcare system was not created to deal with this type of treatment, she said, and this has led to a trend of some insurance companies carving out specific disease conditions for various rare diseases.┬Ā┬Ā

In turn, this pushes alternative funding back onto the pharma companies for patient assistance and access programs. While Nichols admitted that we do not have a solution to this issue today, she put the following question to the audience ŌĆō ŌĆ£Do we need a new drug development business model that relies on earlier engagement for reimbursement and patient interaction?ŌĆØ┬Ā

Numerous service providers invested heavily into the CGT sector in 2021, including a host of new, but big, players.┬Ā

The expansion of CGT end-to-end service providers ŌĆ£shows that raw materials are front and center this year, because we all know what one fracture in our supply chain means. Everyone in this room has had supply chain issues this year,ŌĆØ said Nichols.┬Ā┬Ā

There is aŌĆ»general consensus among professionalsŌĆ»that the amount of talent coming through the ranks is not at the same pace as the huge investment in capacity being seen across the Life Sciences industry, and so it is no surprise it made NicholŌĆÖs top ten moments.┬Ā┬Ā

ŌĆ£You look at the numbers and the growth and that’s great [but] now we need the people,ŌĆØ Nichols said.┬Ā┬Ā┬Ā

With an increase in competition for talent, it is imperative that workforces develop initiatives to gain and retain talent. Another aspect of workforce development opportunity is job mobility. Nichols referenced how many people have moved in the last two years due to increase in wages and said this is a feature and function of the growth in the sector.┬Ā┬Ā

Over the last year, there have been several incidences of adverse events in gene therapy trials from firms including Bluebird Bio, Pfizer, and Adverum. Nichols said the adverse events show the industry still has lots of learning to do regarding dosing and safety.┬Ā

Nichols also spoke of industry efforts to address gene therapy issues, specifically the AGING (Advancing Geriatrics Infrastructure & Network Growth) Initiative as a way of sharing best practices to help drug developers provide a pathway to efficacious drugs. Meanwhile, safety issues and precautions led to a US Food and Drug Administration (FDA) cellular tissue and gene therapies advisory committee meeting in September 2021 with the agency recognizing that it can play an important role in sharing information.┬Ā┬Ā

Northpond Ventures have funded various projects, including the following: 64x Bio, a synthetic CGT manufacturer received $55 million in a series A round of fundraising to fund the expansion of its VectorSelect platform, which the company claim has the potential to revolutionize the economics and accessibility of gene therapy. Meanwhile, Isolere Bio (a Duke University spinout) bagged $7 million in Seed funding to support production, scaleup, and commercialization of its purification technology for adeno-associated virus (AAV) vectors. And Ori Biotech recently secured $100 million in a Series B funding round to expand all functions of its CGT manufacturing platform.

Investment firm KKR, meanwhile, launched Gamma Biosciences in 2019 to serve advanced therapies, and seven investments have been made to date, including: The┬Āacquisition of BioMagnetic Solutions in January 2021, and the buying of a controlling stake in lipid-polymer nanocomplex (LPNC) developer Mirus Bio in May, bolstering its cell line development, viral vector manufacturing, and cell engineering offerings. And in an undisclosed non-controlling investment in September, the company added bio-sensor and analytics firm Nirrin for process analytics.┬Ā┬Ā

1) CAR-T Advancements in Line of Treatment┬Ā┬Ā

CAR-T advancements in line of treatment comes first as Nichols says she gets ŌĆ£goosebumpsŌĆØ thinking of the journey from a fourth or fifth line to a second line standard of care.┬Ā┬Ā