According to Valneva, VLA15 is the only active vaccine program in clinical development against Lyme disease â€“ a vector-borne illness transmitted to humans by infected Ixodes (aka deer or blacklegged) ticks.

The multivalent protein subunit vaccine uses an established mechanism of action for a Lyme disease vaccine that targets the outer surface protein A (OspA) of Borreliaburgdorferi, the bacteria that cause Lyme disease. 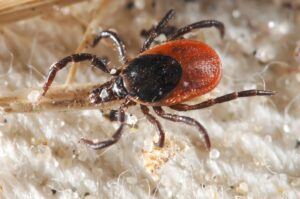 Pfizer teamed up with Valneva in April 2020 to develop the vaccine when it was in Phase II trials, but this week has upped its interest in both the candidate and the Saint Herblain, France-headquartered firm through a â‚¬90.5 ($95) million investment.

â€śPfizerâ€™s investment in Valneva highlights the quality of the work that weâ€™ve done together over the past two years and is a strong recognition of Valnevaâ€™s vaccine expertise,â€ť Valnevaâ€™s CEO Thomas Lingelbach said.

â€śThis subscription agreement will contribute to our investment in the Phase III study while limiting the impact on our cash position. Lyme disease is spreading and represents a high unmet medical need which impacts the lives of millions of people in the Northern Hemisphere.â€ť

Under terms of the arrangement, Pfizer will increase its development contribution from 30% to 40% of the costs and pay tiered royalties to Valneva of between 14% and 22%, compared to royalties starting at 19% in the initial agreement. Valneva could also be entitled to up to $100 million in milestone payments based on sales, though other development and early commercialization milestones are unchanged, of which $168 million remain, including a $25 million payment to Valneva upon Pfizerâ€™s initiation of the Phase III study.

Depending on Phase III success, the firms could submit a Biologics License Application (BLA) to the US Food and Drug Administration (FDA) from 2025.