The US FDA has approved a manufacturing process using a Purolite Praesto resin for the first time. Purolite says Janssen, Celgene and Biogen are among the firms working with its Praesto range of mAb capture resins.

The separation tech firm told Bioprocess Insider about demand for its products last week, explaining that “Praesto resins are currently implemented into over 170 ongoing pre-clinical to Phase III projects at facilities across the globe.

“This is a mix of standard and custom design resins. Praesto resins are now used by two of the top ten global CMOs [contract manufacturing organizations] and eight of the world’s largest biopharmaceutical developers.” 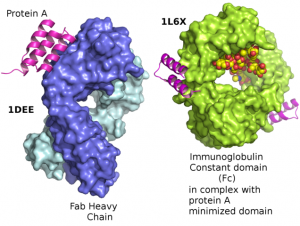 The comments came a day after the US Food and Drug Administration (FDA) approved a manufacturing process in which a Praesto resin is used for the first time. Purolite described the regulator’s decision as a “major milestone” for the technology.

The spokesman declined to name the drug or the company involved but did share details of some of the firms testing Purolite’s resin in manufacturing processes.

“Companies such as Janssen, Alvotech, Celgene and Biogen are some examples who recently presented their independent performance data for Praesto at various seminars around the world, specifically related to mAb bioprocessing.”

Protein A is used in large-scale purification of monoclonal antibodies (mAbs).

The basic idea is to run a biopharmaceutical process stream through a column packed with beads onto which Protein A has been attached. Any mAb coming into contact with the protein is bound and can be collected.

Protein A occurs naturally on the surface of the cell wall of Staphylococcus aureus bacteria. However, at present most Protein A used by the biopharmaceutical industry is produced in modified strains of Escherichia coli.

Purolite’s Praesto range of resins combine Protein A with porous beads made from agarose that is extracted and milled from locally-harvested seaweed.

For a long time GE Healthcare was the only firm supplying agarose Protein A resins to the biopharmaceutical sector.

In recent years the situation has changed. Purolite’s spokesman told us an alternative source of Protein A is vital to help biopharma mitigate the risk of supply interruptions.

“Before Purolite entered the Life Science space, there was only one vendor on the market that had the capacity to supply agarose-based resins in the volumes required by the industry.”

To address this, last September Purolite set up a resin manufacturing facility at the Llantrisant Business Park in Wales.

The spokesman told us: “Today we operate several independent manufacturing lines that can supply up to 100,000L of agarose resins, which is approx. 30% of the global annual demand for agarose-based chromatographic resins.”