After a six-year partnership with CDMO Lonza ended, Sartorius Stedim Biotech says it is looking to build its own cell culture media business.

In November 2018, bioprocessing vendor Sartorius and contract development and manufacturing organization (CDMO) Lonza ended a supply and distribution partnership forged in December 2012 for media and buffers used in the manufacture of protein-based therapeutics and vaccines.

Under terms of the deal, Lonza manufactured the media and Sartorius had the exclusive sales and marketing rights. Customers of both companies are still able to source media products under a now non-exclusive supply deal, but Sartorius said this week it intends to develop its own cell culture media business. 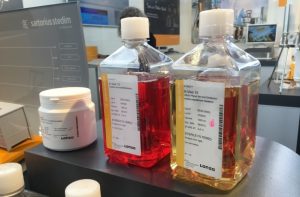 Sales figures for cell culture media have not historically been divulged, but CEO Joachim Kreuzburg said that â€śafter having shown that we are absolutely able to grow such a business and to triple it within three years,â€ť it is an area which Sartorius wishes to continue.

â€śTherefore, we are working on potential ways to build up a more or less fully-owned sales culture media business within our portfolio,â€ť he continued, though added ensuring quality and sustainability is a priority over speed-to-market.

â€śWe still have access to sales culture media from Lonza so we are able to serve our customers. There is no rush that we are in here, but I could definitely imagine that in the long or mid-term we will build up one way or other in [our] sales culture media business.â€ť

According to an investor presentation from September 2018, Sartorius trail behind Thermo Fisher, (Merck) MilliporeSigma, and GE Healthcare in the cell culture media space.

The end of the Lonza deal will see Sartorius take a â‚¬40 million ($45 million) hit on its Bioprocess Solutions Division 2019 forecast, though the business will continue to grow.

â€śWe expect a top line growth of between 8% to 12%. Here, we have factored in a dilution of around three percentage points presumably following the modification of the agreement with Lonza regarding cell culture media,â€ť Kreuzburg told stakeholders.