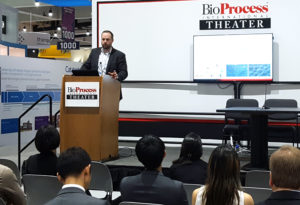 Kevlahan described Quad Technologies as an early stage company founded in 2013 and headquartered in Woburn, MA. Its approach to cell and gene therapies is offering bioprocessing tools with a biomaterials focus. The companyâ€™s QuikGel platform is a hydrogel-based technology for making different sizes of hydrogel microbeads that will dissolve under gentle conditions. The beads can be magnetic or nonmagnetic for both research and bioprocessing applications. This technology provides Quad customers with a gentle and scalable solution for, e.g., T-cell separation, activation, and expansion.

The challenge in dealing with cell therapy products comes from a range of manufacturing issues. Kevlahanâ€™s company address those with biomaterials. The QuikGel platform allows for capture and release of cells from substrates without including deleterious agents such as enzymes. The hydrogel polymer disassociates with ease. Within five seconds, cells can be decoupled from the substrate. Beads come in 5-Âµm to 500-Âµm sizes, depending on what a given application requires.

Quadâ€™s MagCloudz polymers impregnated with magnetic particles can be manipulated within a bioprocess unit operation or a cell-separation experiment. At the end of such a process, loaded cells are decoupled from the magnetic beads. Such magnetic beads traditionally have served as a good research tool that was hard to adapt to biomanufacturing applications because of difficulties in removing them at the end of a given process. That process of removal could pose contamination and toxin issues, with 30% yield of protein products downstream. QuikGel hydrogel polymers act as intermediaries between the MagCloudz beads and cells to allow for straightforward disassociation without product loss.

Kevlahan presented a cell-separation example using umbilical cord blood, which has a low presence of T cells at 6.5%. Using Quad technology, T cells were obtained at 96% purity (bead-free) at end of process. They also retained good viability. Users can optimize their own process robustness and enjoy flexibility in sorting, with the option of selecting subsets of T-cell populations.

To bridge the gap between cell selection and cell-expansion culture â€” so users can apply and qualify a single platform for the whole process â€” QuikGel hydrogels can be used as a scaffold for cell activation and expansion. Currently in development, Quadâ€™s Cloudz 10-Âµm polymerized hydrogel spheres include no magnetic element. By adding the beads to T cells or peripheral blood mononuclear cells (PBMCs) in media, users can get those cells to expand on the scaffolds. At the end of their culture, users can dissolve the hydrogel matrix away to yield cells in media ready for downstream processing.

Different media formulations provide the same good results, Kevlahan said. Comparison testing against conventional methods showed that this single-addition platform gave the same doubling capacity as other state-of-the-art technologies. An academic partner also ran a comparison study and saw a significant increase in T-cells compared with two other platforms tested. When the academic team measured expansion, they saw a much larger expansion index with the Cloudz platform.

Kevlahan listed these advantages of his companyâ€™s technology:

The company is designing products to be used for clinical bioprocesses and is seeking advice from regulators for that purpose. Kevlahan says Quad is focused on chimeric antigen receptor T (CAR-T) calls and enabling cell and gene therapies. The Quikgel product offers distinct advantages not only for cell separation, but also for bioprocessing by decreasing product loss and eliminating unit operations. Cloudz CD3/CD28 scaffolds offer a single-addition, bead-free process for T-cell activation and expansion. The company has invested in current good manufacturing (CGMP) infrastructure for these and future products.