In summer 2007 the MaRS (Medical and Related Sciences) center in downtown Toronto broke ground for a massive expansion. The fact that this innovative science and technology commercialization facility is more than doubling in size — to 1.6 million ft2 — less than two years after its official opening, indicates the healthy state of life sciences in Ontario.

Recent headline stories in scientific journals have reported on numerous genetic discoveries by leading Ontario scientists (1). Breakthroughs in our understanding of autism have been made by Stephen Scherer of Toronto’s Hospital for Sick Children. And Paul Hebert of the University of Guelph has begun a DNA barcoding initiative that is rapidly being adopted by scientists worldwide. The goal of Hebert’s project is a complete catalogue of the Earth’s life forms. Both researchers were funded in part through the Ontario Genomics Institute, one of the founding tenants of MaRS.

MaRS is a new player among the growing number of innovation centers worldwide that have emerged as fertile meeting grounds for bioentrepreneurs, public-sector researchers, and government policy makers. It is also just one element of a province-wide innovation ecosystem that includes cutting-edge advanced manufacturing facilities, telecommunications software development expertise, and one of North America’s largest life sciences clusters.

Leaders in every advanced society in the world are searching for the best way to capture the tremendous economic growth potential of commercializing new technologies. In Ontario, the government is investing $1.7 billion toward innovation and commercialization strategies that support a sustainable, knowledge-based economy. Ontario’s life sciences industry employs more than 40,000 people at more than 800 companies. It includes global giants such as GE Healthcare, Pfizer, and sanofipasteur, as well as Canadian multinationals MDS, Apotex, and Biovail. 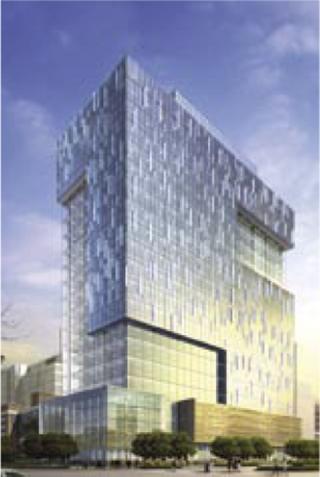 The second phase of the MaRS center will be developed by Alexandria Real Estate Equities, Inc. This building will anchor the city’s biomedical corridor in the Discovery District of Toronto. ()

There are six medical schools in the province, including the new Northern Ontario School of Medicine. The province has become a magnet for attracting some of the top researchers in the world. Readers of The Scientist magazine voted the University of Toronto as the best university to work at in the world outside the United States (2). McMaster University in nearby Hamilton ranked seventh in the same poll. This adds up to a critical mass of researchers in Ontario who are pushing the boundaries of discovery in every direction and in virtually every field.

“We are really strong in generating ideas and we have fantastic researchers,” said Bill Mantel, director of commercialization at the Ontario Ministry of Research and Innovation. Mantel was involved in developing the Ontario government’s innovation strategy. “What we discovered was that we had lots of tremendous intellectual property sitting on the shelf because there was a lack of business knowledge, or a lack of early-stage capital, or a lack of time on the part of the scientist to pursue commercial development. There was a commercialization gap in the innovation process. We had to close that gap or those innovations would be snapped up and developed in other jurisdictions.”

To accelerate the commercialization of promising discoveries and feed the early stage growth of start-ups, Ontario launched a $160 million “Ideas to Market” strategy in the spring of 2006. It involves

In the first round of the VC fundraising, Ontario has received an additional $75 million from partner investors — OMERS Administration Corporation, RBC Capital Partners, the Business Development Bank of Canada, and Manulife Financial — bringing the total fund to $165 million. Future rounds will further increase the value of the fund (3).

In addition, in 2005 the Ontario Research Commercialization Program was launched. It provides $31.4 million to public research institutions and nonprofit organizations to accelerate the technology-transfer process and move promising intellectual property off the laboratory shelf and into the private sector. The focus is on high-growth industries such as life sciences, the environment, and energy. Underlying this strategy is the $527 million Ontario Research Fund (ORF), which supports new leading-edge research initiatives. Key criteria for the program include quality of research, strategic value for the province, and commercialization.

One example is the funding provided by ORF to Dr. Michael Tymianski and his colleagues at the Toronto Western Hospital. His team is exploring a new class of drugs, MAGUK inhibitors, to determine the best time for administering them after stroke or traumatic brain injury. This work will support commercialization and human clinical trials — and ultimately, improved quality of life for stroke survivors as well as reductions in the millions of dollars Ontario spends annually for acute stroke care. The strategy has won solid support from researchers and from industry. “We’ve had excellent pick-up on the programs,” reported Mantel. “We want to super-charge innovation in Ontario. These programs are part of our approach. MaRS is part of our approach. But keep in mind that these are carefully targeted, strategic enhancements to a fundamentally strong bioindustrial business environment.”

A number of international business analysts have concluded that Ontario offers one of the most cost-efficient environments in the world for growing a life sciences company. A 2005 study by The Boyd Company (Princeton, NJ; www.theboydcompany.com), compared the cost of operating a biomedical research and product development facility in 50 large North American and European cities. Toronto was among the lowest
-cost locations. KPMG’s Competitive Alternatives reports in 2004 and again in 2006 came to similar conclusions (4, 5). The studies found that competitive corporate tax rates in Ontario were 34.12%, almost four percentage points below the average in the United States. Combined with salary expectations, utility rates, construction costs, and other factors contributed to demonstrating Ontario’s competitive advantage. As an added advantage, the province offers one of the most generous research and development (R&D) tax incentive programs in the industrialized world. The after-tax cost of $100 in R&D expenditures can be reduced to $41 or less. 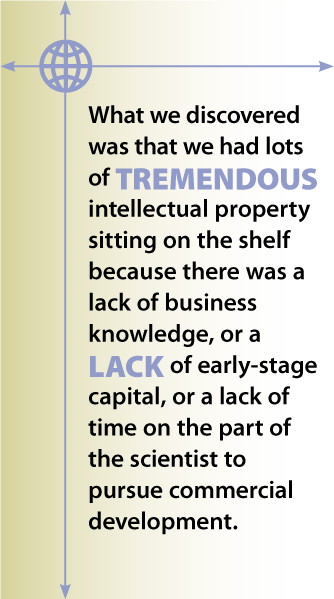 The driving force for knowledge-based businesses is brainpower, a fact that Ontario clearly recognizes. It has launched a massive investment program to expand the capacity of its network of 20 universities and 24 colleges — a network that already produces 29,000 graduates annually in math, sciences, and engineering. The $6.2 billion investment is the largest postsecondary education investment in Ontario in 40 years, and is designed to increase the number of researchers, the multidisciplinary scope of their expertise, and their familiarity with cutting-edge research technologies.

Centers of Excellence: MaRS is not Ontario’s first foray into building bridges between research laboratories and the marketplace. For more than 20 years, the Ontario centers of excellence have been key matchmakers in the research-to-commercialization process for scientists and companies across Ontario. There are five sector-focused centres of excellence: advanced materials and manufacturing; energy; environmental technologies; information and communications technology; and photonics.

These centers act as a trusted agent within the R&D community, helping companies leverage their budgets by tapping into Ontario’s extensive research resources. They have an impressive success rate for creating viable spin-off companies and finding industrial applications for research discoveries. Part of the reason for their success is that the centers offer companies access to a province-wide network of university and college-based researchers and their facilities, coinvestment capital, and a time-tested contractual framework for research collaborations.

The reason MaRS is doubling in size is that it fills an emerging need in Ontario’s innovation process. As fields that are traditionally quite distinct begin to overlap, merge, and converge, developments such as MaRS offer scientists and entrepreneurs an open and friendly meeting ground. From the beginning, the vision was to create a convergence center where people and ideas from very different fields could come together, connect, and generate commercially viable products, technologies, and services. Part of that vision is served by a state-of-the-art physical infrastructure of common spaces, meeting rooms, conference facilities, and fiber-optic–enabled collaboration technologies (6). But the real driving force of innovation is ideas — knowledge, expertise, curiosity and insights — and it is in creating a welcoming space for the convergence of ideas that MaRS has excelled.

There are conferences, seminars, workshops, and special events going on all the time, often several per week. Numerous ongoing event series are based on such themes as bioentre-preneurship, emerging technologies, global leadership, and drug development.

“When we launched MaRS, one of the programs we started was a 16-week series of free evening lectures we called Entrepreneurship 101. That was really designed to give scientists an overview of the parameters of the business world,” said Ross Wallace, MaRS’s director of strategic development. “We had no idea how many people would show up. We thought maybe 50 or so. We’ve had more than 400 people in the first year, and we hear it has inspired a number of scientists to sign up for an MBA. For me, that’s a perfect example of convergence here at MaRS. We bring together people and ideas from different fields and create a catalytic effect.” 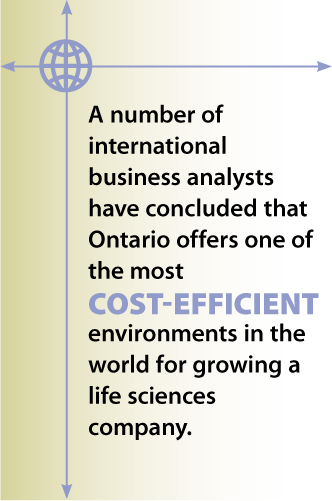 For technology start-ups, especially in life sciences, MaRS offers incubator facilities including wet laboratories, chemical and biohazard waste disposal, fully furnished offices and other key amenities. But more importantly, it offers access to technical and business expertise both within Ontario and around the world. MaRS has formal linkages with comparable innovation centers in Europe and the United States, which could eventually grow into a worldwide network of innovation centers. This expertise can range from governance to intellectual property issues, product targeting, manufacturing strategies, and market access.

One such start-up, Octopz, has developed a remarkable online collaboration technology that lets users view, modify and mark-up documents, presentations, and even digital media formats securely and in real-time — anywhere, anytime.

“MaRS is more than a building for us: it’s a community, a network, a focus group, and a staging area,” said Octopz CEO Barry Fogarty. “We knew we had a great idea, but we weren’t sure how to turn it into a business. The advisors at MaRS helped us to quantify and assess the opportunity, and to plan and implement a fundable go-to-market strategy.” Octopz is the new face of commercialization in Ontario.

So is Amorfix Life Sciences, a Toronto start-up whose innovative technology has the potential to permit the diagnosis of the human form of mad cow disease and won a prestigious 2007 Technology Pioneer award from the World Economic Forum in Davos, Switzerland. The company’s technology is based on breakthroughs made by scientists at the University of Toronto.

Ottawa-based DNA Genotek, has a quick, easy, inexpensive DNA-from-saliva collection kit that was developed by a research scientist at the Ottawa Regional Cancer Center. It has been adopted by top-tier health research institutions such as Harvard, Stanford, Cambridge, and Johns Hopkins. More than 2,500 laboratories in 68 countries are currently testing and using their products.

The pace of effective commercialization is accelerating in Ontario, supported by a wide range of factors, but driven by the global realities of economic growth.

“Today, more than ever, Ontario’s economic and social prosperity depends on our ability to compete and win in the global marketplace,” said Premier McGuinty. “Innovation is the key to growing our existing companies faster and creating successful new ones. When that happens, people in Ontario enjoy the benefits through more rewarding jobs and more vibrant communities.”

The fruits of recent investments are starting to show. There’s a lot going on in the province. For savvy investors and entrepreneurs, particularly those with an interest in life sciences, it pays to help Ontario shift into the fast lane.