As the biopharmaceutical market continues its global expansion, biomanufacturers are becoming increasingly comfortable with the idea of outsourcing activities to international destinations. This year, China expanded its lead as the primary potential destination. This measure of interest shows how the country’s international outsourcing potential and global perception have changed over the past five years. It also suggests a greater international awareness of opportunities opening up in China for local production. 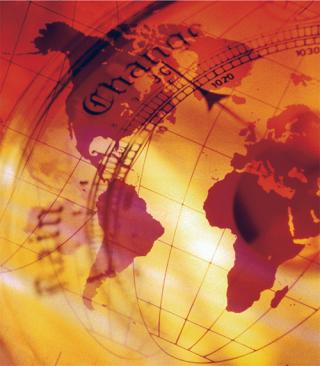 More than a quarter (26.2%) of the 302 global respondents to our ninth annual survey indicated a “likelihood” or a “strong likelihood” that they would consider international capacity expansions to China over the next five years (1). For the second year, this puts China ahead of other leading destinations such as India (18.4%), Germany (16.9%), and the United States (16.9%), as Figure 1 shows.

Analyzing respondents by geographical location, you find high interest among American companies for future offshoring to Asian markets. For US-based companies, such markets make up the top three possible destinations for offshoring over the next five years. China tops the list, with 34.4% saying that they are considering outsourcing there at some level (from “possible” to “strong likelihood”), up from 30.9% last year, 16.7% in 2010, and 26.2% in 2009 (Figure 2). Following China is Singapore, with 31.3% of US companies at some level considering offshoring there in the next five years. That percentage is also up from last year (27.9%), although it is down 2009’s peak of 37.5%. 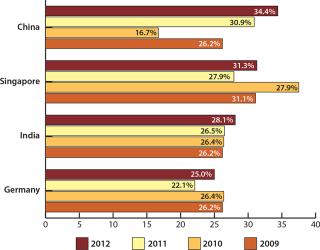 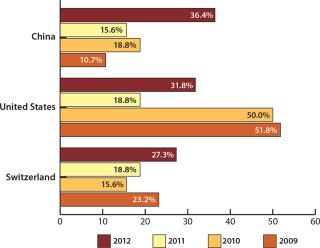 India is third on the list, with 28.1% considering outsourcing there in the future. The flattened interest in expansions to India may have to do with general uncertainty regarding the future of drug manufacturing there. For example, a recent Indian Health Ministry decision to end sales of branded drugs sold under brand names is expected to expand generic drugs. The Union health ministry ordered Indian states to stop issuing licenses for the manufacture or sale of drugs on the basis of their brand names.

Outside the top five but seeing increased interest this year is Korea, with 15.6% of respondents saying that they consider it a potential destination for outsourcing, placing it eighth out of 25 countries identified. The proportion of biomanufacturers considering Korea has almost doubled from last year’s 8.8% and continues to grow from prior years. This may be the result of substantial Korean investment in the biomanufacturing segment and a rapidly expanding presence at international conferences.

Other countries or territories that US companies are increasingly considering for future international outsourcing include Germany, Ireland, Austria, Russia, and Israel. Some countries continue to see a downward trend begun last year, with lowering interest in Switzerland, Canada, The Netherlands, and France.

Aside from the countries listed above, US companies were more likely this year to look to a number of global offshoring options compared with last year, suggesting that they are becoming more focused on international opportunities. This activity may be taking on a more seamless dimension in their strategies. Although the list of possible destinations is still dominated by Asian and Western European destinations, it is expanding as it begins to include Latin America and more frontier markets in the Middle East and Africa.

The Asian and Western European markets continue to hold a far greater share of the global biomanufacturing market than those areas do. As BioPlan Associates’ Top 1,000 facilities index shows (2), 25.9% of global biopharmaceutical manufacturing is concentrated in Europe. China (8.5%), India (8.1%), and Asian countries (9.6%) collectively account for another 26.2%.

The analysis also shows that Russia’s presence in our survey is relatively impressive regarding its availability as an offshoring destination. Although just 2.8% of global biopharmaceutical manufacturing is concentrated in Russia and Eastern Europe, 12.5% of US-based companies are considering Russia as a “possible” future destination.

BioPlan Associates also evaluated US responses that indicate more aggressive, positive consideration for country destinations as either a “strong likelihood” or “likelihood” (not just a “possible” destination). China again fared best on this measure, with 28.1% (15.3% last year) of respondents citing some likelihood that they would outsource activities there in the next five years. Following was India, with 21.9% (13.9% last year) considering it a likely destination. Those represent significant shifts from just a year ago and are even more dramatic when viewed against responses from 2009, when just 2.8% indicated China and 1.4% cited India as
likely destinations. As mentioned above, the Indian Health Ministry’s recent decision to end sales of branded drugs sold under brand names and focus on expanding domestic generic drugs sales may affect the country’s trending in future years. 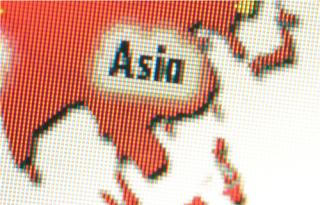 Among US companies, Germany is also considered a strong destination. This year, 18.8% of US-based respondents indicated the country to be a “likelihood” or “strong likelihood” for outsourcing in the next five years. That figure is up from 12.5% during the past two years and 5.7% in 2009.

Not only US companies are seeing opportunities in China. Western European biomanufacturers now consider the country to be a major destination for offshoring too. China was cited as a possible destination by 34.6% of European companies (ahead of the United States at 31.8%). This is the first time that China has headed the list of potential international destinations among Western European respondents. To put these results into perspective, the United States led all possible destinations in 2009 at 51.8% of respondents — compared with 10.7% for China.

Despite Popularity, China Has a Way to Go

Despite the interest reflected above, China was a very late starter in the area of contract biomanufacturing, so it is still very early to see it match the growth prospects of other Asia destinations. The few international CMOs in China (such as AutekBio) are striving to establish a global presence. Those companies need to overcome legal and regulatory issues that limit commercial-scale contract manufacturing in their country.

Nevertheless, China is still home to some excess pharmaceutical production capacity, so outsourcing could permit improvements when the idle capacity of many production facilities can be put to use. However, it might take years for major Chinese CMOs to be established, come up to full CGMP standards, and ultimately be permitted to operate at commercial scale.

Keep in mind that the BioPlan Associates survey evaluates future considerations rather than current activities. So it should be viewed in the context of future expectations instead of current capabilities. A quick comparison of the top markets in consideration for current outsourcing reveals these differences.

The United States is still a dominant force when it comes to biologics manufacturing capacity. However, 90% or more of that capacity is dedicated to producing “innovator molecules,” with relatively limited capacity available for custom manufacturing. Most US contract manufacturing organizations (CMOs) have capacity <2,000 L. In recent years, however, single-use technology has ramped up in scale. Such systems are generally available at most of the established US CMOs — e.g., Catalent Pharma Solutions, Cook Pharmica, CMC Biologics, Fujifilm Diosynth Biotechnologies, Gallus BioPharmaceuticals, KBI Biopharma, and Laureate Pharma. With increasing idle capacity among the biggest innovator companies (as biosimilars eventually reduce their production volumes), we may also see new contract manufacturing services at companies such as Genentech (Roche), Novartis, Amgen, and Eli Lilly.

In Europe, the leading companies (in terms of capacity) are still Lonza, Boehringer Ingelheim (BI), Sandoz (Novartis), and Fujifilm Diosynth Biotechnologies. In addition, smaller companies such as Rentschler Biotechnologie have 30–3,000 L of GMP manufacturing capacity. Several smaller-scale CMOs are located in Switzerland, Germany, The Netherlands, and the United Kingdom. Whereas Lonza and BI have achieved licensing for commercial manufacturing of biologics, the other (smaller) CMOs generally have qualification/approvals only for early and late-stage clinical manufacturing.

The Asian markets are still further behind. Many do not yet have approvals for making material acceptable for the US market. Yet this may soon change. For example, products made by Biocon in India may soon become available on European markets. And multiple South Korean companies should be among the leaders in launching biosimilars on US and EU markets.

We examine attitudes toward international outsourcing destinations as a way to measure long-term attitudes toward offshoring of biopharmaceutical operations. When BioPlan Associates separately asked survey respondents to reflect on their organizations’ future international outsourcing activities over the next five years, 35–42% (depending on the area of outsourcing) indicated that they could offshore manufacturing operations to some extent during that period.

A growing acceptance of offshoring is seen when comparing this year’s results against last year’s responses. Most notably, 35.7% said this time that they would offshore at least some of their process development activities for biomanufacturing in the next five years, representing a 13.3% point increase from last year’s 22.4% (a 59.3% relative increase). Although the needle didn’t move as much regarding offshoring of biomanufacturing operations (40.5% compared with 37.6%), this year 41.7% of respondents said that they would offshore at least some other operations over the next five years (up significantly from 29.6% last year). The markets that are best positioned today to meet that rising demand will no doubt enjoy growing opportunities through the coming years.

The Ninth Annual Report and Survey of Biopharmaceutical Manufacturing Capacity and Production in the series of annual evaluations by BioPlan Associates, Inc. yields a composite view and trend analysis from 302 responsible individuals at biopharmaceutical manufacturers and CMOs in 29 countries. The methodology also included more than 185 direct suppliers of materials, services, and equipment to this industry. The 2012 survey covers such issues as new product needs, facility budget changes, current capacity, future capacity constraints, expansions, use of disposables, trends and budgets in disposables, trends in downstream purification, quality management and control, hiring issues, and employment. This quantitative trend analysis provides details and comparisons of production by biotherapeutic developers and CMOs
. It also evaluates trends over time and assesses differences among the world’s major markets in the United States, Europe, and beyond.

Author Details
Eric S. Langer is president and managing partner at BioPlan Associates, Inc., a biotechnology and life sciences marketing research and publishing firm established in Rockville, MD, in 1989. He is editor of numerous studies, including Biopharmaceutical Technology in China, and Advances in Large-Scale Biopharmaceutical Manufacturing; , 1-301-921-5979; .