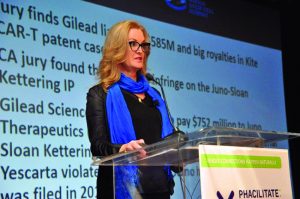 10: Patent Infringement Upheld: In December 2019, a jury found Kite Pharma (Gilead Sciences) guilty of infringing a patent exclusively licensed by Juno Therapeutics (Bristol-Myers Squibb, BMS) from researchers at the Memorial Sloan Kettering Cancer Center. The patent in question relates to technology used in Kite/GileadŌĆÖs Yescarta (axicabtagene ciloleucel) chimeric antigen receptor (CAR) T-cell therapy. The juryŌĆÖs decision required Gilead to pay US$585 million in addition to 27.6% in royalties (totaling $752 million), to BMS and Sloan Kettering, resolving a case filed a day after Yescarta gained approval in October 2017. In a postscript that well could feature in NicholsŌĆÖs next list, BMS filed a January 2020 motion to exact punitive damages that would raise GileadŌĆÖs penalty to $1.5 billion.

8: In-House Manufacturing: With a dearth of third-party capacity, especially for viral-vector production, major CGT players have augmented their internal networks. Novartis acquired a Colorado facility from AstraZeneca to support gene-therapy production. That deal came along with the purchase of contract development and manufacturing organization (CDMO) CellforCure. Pfizer, meanwhile, ramped up capacity in August with a $500 million investment to build facilities for production of recombinant adenoassociated virus (rAAV) vectors used in gene therapies and vaccines.
In March 2019, bluebird bio cut the ribbon on a 125,000-ft┬▓ facility in Durham, NC.

Precision BioSciences opened a current good manufacturing practice (CGMP) facility in North Carolina dedicated to genome-edited allogeneic CAR T-cell therapies. GileadŌĆÖs Kite continued to increase its footprint with a facility in Frederick County, MD, expected to begin commercial production by late 2021. Regenxbio announced in May that it was building a plant at its Rockville, MD, headquarters to support NAV technologyŌĆōbased vectors ŌĆö used in its gene therapy candidates ŌĆö at scales up to 2,000 L. And Audentes Therapeutics laid plans to add 8,000 L of capacity by expanding an AAV manufacturing site in San Francisco, CA. Later in 2019, Astellas cited internal manufacturing capacity as a major driver in its $3 billion acquisition of Audentes.

6: Vertex Acquires Semma: A $950 million deal, announced in September 2019, adds Semma Therapeutics ŌĆö which focuses on stem-cellŌĆōderived human islets as a possible cure for type 1 diabetes ŌĆö to VertexŌĆÖs growing regenerative-medicine portfolio. Nichols pointed out that the deal represents VertexŌĆÖs entry into the cell-therapy space, complementing its move into gene editing with the acquisition of Exonics and a research expansion with CRISPR Therapeutics. ItŌĆÖs also a significant investment in cell therapies for large indications other than cancer.

3: Big Licensing Deals: Last year also saw a flood of licensing deals with large upfront payments. Roche is paying over $1 billion up front for extra-US rights to Sarepta TherapeuticsŌĆÖs Duchenne muscular dystrophy (DMD) gene therapy. Genentech (a member of the Roche Group) entered a $300 million deal with Adaptive Bio for access to a T-receptorŌĆōdiscovery and immune-profiling platform in a deal that ultimately could be worth up to $2 billion. As noted above, Vertex inked a $175 million deal with CRISPR Therapeutics for its gene-therapy pipeline.

2: Fuel for the Fire: Growth in ŌĆ£medium pharma,ŌĆØ major licensing deals, and CDMO consolidation did characterize 2019. But big-pharma buying power also shaped the CGT space. BMS bought Celgene for a whopping $74 billion, bringing with it several CAR-T programs. RocheŌĆÖs $4.8 billion acquisition of Spark also was significant ŌĆö as were BiogenŌĆÖs $877 million purchase of Nightstar Therapeutics, PfizerŌĆÖs stake in and option to buy out Vivet, and BayerŌĆÖs acquisition of remaining shares in BlueRock Therapeutics. Nichols said, ŌĆ£These signal that ŌĆśbig pharmaŌĆÖ is optimistic [about] mergers and acquisitions in the advanced-therapy space and the value that those therapies can bring.ŌĆØ

1: Patient Access: The business model for CGTs differs greatly from those of traditional pharmaceuticals and biologics, and patient access poses a challenge. With the arrival on the market of Zolgensma gene therapy and its $2.1 million price tag, pricing conversations have changed, and all parts of the industry are forced to address how to manage patient access. That drug represents a life-or-death conundrum for 68% of pediatric patients with spinal muscular atrophy 1 (SMA1). Patients must be dosed before the age of two, yet few places in the United States offer screening before that age.

ŌĆ£We need to work as an industry to ensure [that] reimbursement and access [are] in sync with approvals,ŌĆØ said Nichols. However, she added, ŌĆ£we must move the conversation to the state levelŌĆØ and bring state Medicaid and insurance companies to the core of the conversation. 2019 showed that change is here. Nichols says that ŌĆ£patient advocacy voices are loudŌĆØ across all indications. Meanwhile, NovartisŌĆÖs proposed lottery-style free-drug program ŌĆö despite some criticism ŌĆö indicates that industry is exploring ways to improve access.

Based in Montpellier, France, Dan Stanton is founding editor
of BioProcess Insider (dan.stanton@informa.com) online at
https://bioprocessintl.com/category/bioprocess-insider, where this article originally appeared.