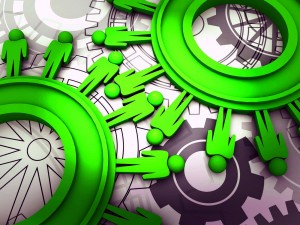 Revenue from operations (herein referred to as revenue) and operating cost (herein referred to as cost) are two independent sentinels of a corporationŌĆÖs performance and return on investment (ROI), which is defined as the ratio of revenue to cost (revenue/cost). Although a company can actively manage cost by controlling its number of full-time employees (FTEs) and the number or type of activities, it cannot directly manage revenue. Revenue is entirely driven by market forces. So if a company experiences a decrease in revenue, then cost also must be reduced by the same fraction to maintain ROI. However, none of these three parameters alone (revenue, cost, and ROI) provides information about the operational efficiency of a company. To expand on this point, scenarios for two hypothetical companies (A and B) in the same industry are described below.

Revenue: Company A generates $1,000 revenue with 10 FTEs (or equipment), and Company B generates $10,000 revenue with 200 FTE (or equipment). Although Company B is generating 10-fold higher revenue than Company A, that revenue is achieved through 20-fold greater resources. That suggests that Company B is less operationally efficient for revenue than is Company A. So operational efficiency is not reflected by revenue as a metric.

ROI: ROIs for both Company A and Company B are both equal to two (revenue/cost). But that alone is not representative of operational efficiency for revenue or cost.

Hence, there is a need to look beyond the traditional metrics of a companyŌĆÖs performance to identify metrics that reflect operational┬Āefficiency for revenue and cost. Metrics of revenue per FTE (RPF) and cost per FTE (CPF) have been mentioned in literature in the context of operations (1ŌĆō3). Here, RPF and CPF have been demonstrated as suitable metrics of operational efficiency and performance.

Although those metrics can be applied to any industry, this article focuses on the biopharmaceutical industry. Although both revenue and cost typically increase with ŌĆö and are skewed by ŌĆö a companyŌĆÖs size, RPF and CPF are shown in this article to differentiate companies based on product characteristic because these metrics are not skewed by company size. Further, graphs of RPF and CPF with FTE form asymptotic curves that define an ŌĆ£industry standardŌĆØ performance. These asymptotic curves are useful for optimizing operational efficiency and maximizing ROI. The article describes a retrospective case study of PfizerŌĆÖs acquisition of Wyeth in 2009 using RPF and CPF metrics. The success of this acquisition was marked by RPF value in 2013 that was higher than the additive metric for Pfizer and Wyeth (based on 2008 data) as well as the ŌĆ£industry standardŌĆØ curve while maintaining CPF relatively unchanged.

Theory
The relationships between revenue and cost with FTE was determined. The theoretical basis is described below.

Revenue can be calculated as the average revenue per product multiplied by the number of products. The average revenue per product is based on market size, competitive situation, and marketing efforts, which are generally independent of a biopharmaceutical companyŌĆÖs size. However, experience curve suggests that (because of efficiencies and synergy) an increase in FTE creates an even higher increase in the number of products (4). That can be written as (number of products) ŌłØ (FTE)a (for a┬Ā>┬Ā1); or revenue ŌłØ (FTE)a. So revenue = k1(FTE)n1 (Equation 1).

To evaluate those metrics, SMC analyzed historical (2013) financial data from multiple US biopharmaceutical companies. The study focused on US companies to minimize deviations as a result of currency exchange rates (financial results reported in $US). The study included the assumption that US biopharmaceutical companies have similar organizational and operational structures regardless of their product characteristic, size, and geographical distribution. So the values of the constants k1 and k2 are similar in Equations 1 and 2 for all companies included in this analysis. 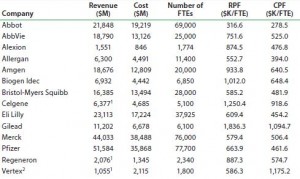 Table 1: Summary of 2013 financial data of US biopharmaceutical companies
1 Revenue from royalty and technology licensing was excluded.
2 For the analysis, Vertex Pharmaceuticals was excluded due to operating loss (revenue < cost)

Analysis of Historical Financial Data
Table 1 summarizes 2013 financial data obtained from the SEC 10k reports filed by multiiple US biopharmaceutical companies. Revenue from technology licensing and royalty was excluded so that the analysis is based on the revenue from core operations only.

Because both n1 and n2┬Āare >0, both revenue and cost increase with an increase in company size (Figure 2 left). Figure 2 (left) shows that larger companies such as Pfizer are at the higher end of the graph, whereas smaller companies such as Alexion are at the lower end. However, when RPF and CPF are used as metrics, the primarily biologics companies are placed higher (outlined by red box) than the primarily small-molecule (and additionally, in some cases, vaccines, consumer health, and animal health products) companies (outlined by purple box) (Figure 2 right). Therefore, the metrics RPF and CPF differentiate companies based on their product characteristic and are not skewed by company size, unlike traditional metrics of revenue and cost.

Figure 2: Revenue and cost (left); revenue per FTE and cost per FTE (right)

We studied how RPF and CPF metrics change with the size of the biopharmaceutical company (Figure 3). The asymptotic curves of both metrics with the size of the company define the performance of the biopharmaceutical industry and the point at which company metrics should fall to match the ŌĆ£industry standard.ŌĆØ Those asymptotic curves can be used to optimize operations for ROI maximization, as described below. 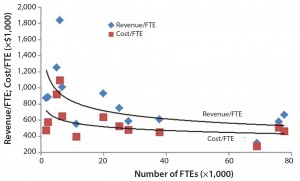 Using Revenue/FTE and Cost/FTE for Operational Efficiency
Figure 3 shows the relationship between RPF and CPF. Both metrics can be used to maximize ROI during routine operations and in a merger and acquisition (M&A).

Maximization of ROI During Routine Operations: The curves in Figure 4 (adapted from Figure 3) define where a companyŌĆÖs metrics should fall to match the industry standard: RPF for a company should fall on the top curve, and CPF should fall on the bottom curve. A company can achieve ROI that outperforms the industry standard by either or both RPF in ŌĆ£Outside 2ŌĆØ and CPF in ŌĆ£Outside 1ŌĆØ regions. An RPF value in the ŌĆ£InsideŌĆØ region is indicates a primarily low-value portfolio, and a CPF value in the ŌĆ£InsideŌĆØ region suggests that the organization has inefficient operations. Therefore, if either metrics falls in the Inside region, a company must take action to adjust that metric accordingly. The matrix in Figures 4 summarizes the┬Ārecommended actions to maximize ROI based on those asymptotic curves. 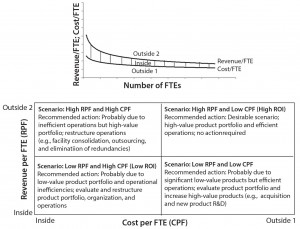 Figure 4: Asymptotic curves of revenue per FTE and cost per FTE based on Figure 3 along with the depiction of inside and outside regions (top); recommended actions to maximize ROI using these asymptotic curves (bottom)

An alternative approach for larger biopharmaceutical companies to maximize ROI is to create strategic business units (SBUs). Creation of SBUs will reduce organizational complexity and encourage entrepreneurial culture within the company while maintaining synergies, thereby increasing RPF values. Although SBUs perform independently, being part of a larger organization will leverage synergies and reduce CPF. Through this alternative approach, larger biopharmaceutical companies can use their size to obtain benefits that can be challenging to obtain otherwise.

Maximizing ROI During M&A Scenario: M&A is a strategy for increasing revenue by merging with and/or acquiring another company. M&A not only adds revenue, but also brings additional cost. Simply increasing revenue through M&A does not increase ROI until synergies between the two companies are exploited to increase revenue and decrease cost compared with the additive value. By leveraging synergies, the (combined) company will increase ROI and will increase shareholder ROI. A retrospective case study of M&A is presented below using RPF and CPF metrics. 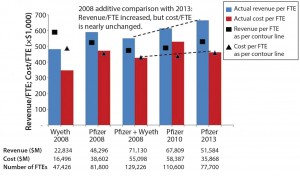 Figure 5: Revenue per FTE and cost per FTE for Pfizer and Wyeth before and after PfizerŌĆÖs acquisition of Wyeth in 2009; Pfizer + Wyeth is the theoretical additive scenario for the two companies.

Although RPF being higher than the additive and the asymptotic curve was desirable, the CPF metric was not desirable. The matrix in Figure 4 recommends restructuring operations to reduce CPF. That scenario was further complicated by the impending patent expiration of Lipitor in 2011 (with a consequent decrease in revenue). Between 2010 and 2013, Pfizer significantly restructured operations to decrease number of FTEs (30%) and cost (39%) while revenue decreased (24%). The combination of those efforts resulted in CPF comparable to the additive and asymptotic curve while maintaining RPF above both comparators. This confirms that Pfizer was able to successfully optimize its operations and increase ROI following the acquisition of Wyeth in 2009. Similar analysis is recommended to other biopharmaceutical companies evaluating the success of their M&A activities.

Suitable Metrics
RPF and CPF are suitable metrics of operational efficiency and performance of biopharmaceutical companies. Although revenue and cost are skewed by company size, RPF and CPF differentiate companies based on their product characteristics and are not skewed by company size. The ability of these metrics to compare biopharmaceutical companies regardless of their size clearly highlights the need for all companies to evaluate their performance using these metrics. Specifically, these metrics and the asymptotic curves defined by them can be used to