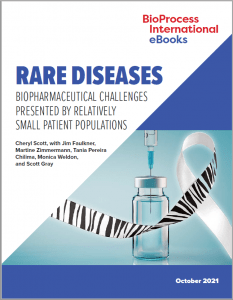 By definition, anÂ orphan disease affects a small percentage of the population. However, with some 7,000 such conditions identified so far, they collectively have a significant impact on global health. An estimated 350 million people are affected worldwide by a rare disease â€” altogether more than the population of the worldâ€™s third largest country (the United States). Some well-known biopharmaceutical companies are devoted to developing treatments for rare diseases. However, the vast majority of such diseases have no treatments approved by the US Food and Drug Administration (FDA) and/or other global regulatory bodies. For instance, during the first 25 years of the Orphan Drug Act (passed in 1983), only 326 such drugs were approved for the US market. To date, roughly 350 of the 7,000 known orphan diseases have approved therapeutic options.

This eBook explores financial, operational, logistical, and manufacturing-related obstacles to the production of treatments for rare diseases. First, BPI Senior Technical Editor Cheryl Scott shares insights from a recent conversation with Jim Faulkner (now a consultant, formerly head of vice president of rare disease manufacturing and supply at GlaxoSmithKline) about the practicalities of orphan drug development. Then Scott presents her virtual roundtable discussion with Martine Zimmermann (senior vice president and global head of regulatory affairs at Alexion Pharmaceuticals), Tania Pereira Chilima (chief technology officer at Univercells Technologies), and Monica Weldon (founder, president, and chief executive officer of Bridge the Gap â€” SYNGAP Education and Research Foundation) about the risks and rewards of developing rare disease treatments. Finally, Scott Gray (cofounder and chief executive officer of Clincierge) describes how patient-support service providers can improve access to clinical trials with rare-disease indications for patients with significant logistical and economic barriers. Read the eBook now to learn more about the needs of patients and drug developers alike in the development of treatments for rare diseases.

Fill out the form below to read the complete eBook now.