Eli Lilly’s 2001 annual report stated that “Xigris… will prove to be one of our industry’s genuine breakthroughs” (1). The company believed that its first-in-class drug “could help save one in five people who otherwise would die” from severe sepsis. One of the world’s oldest and most virulent killers, sepsis is the third most common cause of death for hospitalized patients in the developed world after heart disease and cancer. In the United States alone, 750,000 patients are hospitalized with severe sepsis each year. It is estimated that worldwide 1,400 people die each day from this condition, with up to 30% dying within one month of their diagnosis.

As sepsis progresses through a patient’s body, inflammation rapidly spreads, eventually shutting down organs and too often leading to death. Antibiotics are often administered, but it takes time for them to function while inflammation continues to spread. Lilly’s Xigris product (activated drotrecogin alfa), a biologic that acts as both an antiinflammatory and anticoagulant, had the potential to address this medical need and become the standard of care for those sepsis patients most at risk. In 2001, it was approved by the US FDA for treatment of adults who were at the greatest risk of death from sepsis.

With life and death hanging in the balance and no competition, a treatment for severe sepsis would seem certain to thrive and reap significant profits for the company owning its rights. Lilly seemed to believe this and initially saw the Xigris drug reviving earnings after the loss of patent protection for the company’s Prozac product. Even with a relatively restrictive label, early sales projections called for annual earnings of $300–500 million worldwide. And yet, the world’s first and still the only approved treatment for adult severe sepsis patients at high risk of death has never lived up to those initial sales expectations. 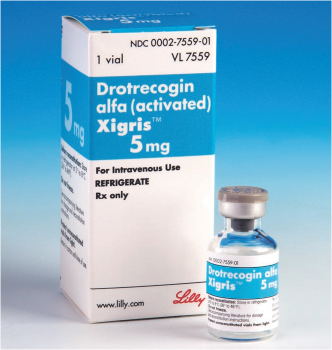 As early as 2002, it was clear that the Xigris brand, despite existing within a potentially lucrative market with little competition, was struggling to achieve its much-lauded potential. Unfortunately for Lilly, significant factors were working against its success. Data from Lilly’s PROWESS phase 3 trial showed a significant overall survival benefit, and although the FDA ultimately approved the Xigris product, the agency restricted its label and approved it for use only in severe sepsis for patients with a particularly high risk of death. The FDA also acknowledged controversy surrounding this decision and asked Lilly to perform additional testing in selected subgroups. This qualified approval contributed to questions regarding study efficacy and safety results — and ultimately led to uncertainty about which patients should receive the treatment and when. As a result, initial sales fell short of expectations.

In an attempt to recover from that slow start, Lilly undertook a marketing campaign to educate physicians about its product and pushed for sepsis treatment practice guidelines that would provide more clarity on the drug’s use. These efforts, however, only added to the controversy. A 2006 article in the New England Journal of Medicine added to the negative perception (2). It discussed the controversial use of practice guidelines as a marketing tactic using the Xigris product as its primary example: “A case in point is the development of guidelines for the treatment of sepsis, which was orchestrated as an extension of a pharmaceutical marketing campaign.” The authors allege that what was promoted as an educational effort targeting a reduction of sepsis-related mortality actually was used as a clever marketing tool for a drug the FDA had been hesitant to approve in the first place.

Ultimately Xigris use has been disappointing due to the reluctance of critical-care physicians to prescribe it. These doctors have been faced with several challenges including the costs of the therapy, the difficulty of selecting which patients are the most likely to benefit from it, and confusion over when to start treatment. Even though Xigris use has been endorsed by international societies and included in the Surviving Sepsis Campaign (www.survivingsepsis.org), physicians just do not seem convinced that the clinical benefit outweighs the risks of serious bleeding that have been associated with this drug. As a result, the product is mainly being used as a late-line therapy, if at all, and it has captured only a 5% market share.

Handicapped by a restrictive label and a hesitancy on the part of doctors to prescribe it, Xigris sales have languished. Today they have stalled at about $200 million worldwide and are projected to drop. These disappointing results are reflected in Lilly’s most recent annual report (3) in which the product is not mentioned at all in the shareholder letter, and its sales figures are included in the “other pharmaceutical products” category reserved for those with the lowest sales numbers. This lack of attention suggests that Lilly has chosen to draw shareholders’ attention away from the Xigris brand.

Personalized Medicine Could Resurrect It

Despite the controversy and disappointing market share, the business case for Lilly’s sepsis drug is still strong. It is still the only approved treatment for a leading killer with a small share of an underpenetrated market and that has demonstrated significant clinical benefit for certain patients. Meanwhile, the incidence of severe sepsis is growing annually at about 8%. For critical care physicians treating the condition, the Xigris drug offers significant therapeutic value, limited only by the difficulty of distinguishing those patients who would most benefit from it from those who may face adverse side effects.

In response to that medical need has come a real push by pioneers in the field of personalized medicine to develop diagnostic tests that will maximize the treatment benefits of Lilly’s sepsis drug while minimizing safety issues associated with its use. Research in this area has mainly focused on either the use of biomarkers to determine treatment dose and duration or genetic markers to identify those patients who would most benefit from Xigris treatment.

Sirius Genomics (www.siriusgenomics.com) was founded by two physicians with expertise in sepsis. Their company has discovered that patients with a certain genetic marker are more likely to die from sepsis and also more likely to respond positively to Xigris treatment. Early in 2006, Sirius negotiated the use of the data from Lilly’s PROWESS study to further its development work on a test that would identify which patients are most likely to respond to Xigris treatment as well as those with the highest risk of experiencing adverse side effects.

Heiner Dreismann, former CEO of Roche Molecular Systems, Inc. and a current member of the board for Sirius Genomics, believes that this diagnostic test would be a game changer for Xigris and thus demonstrates the value of personalized medicine. “This is pharmacogenomics at its best,” he says.

Sirius estimates that if Xigris treatment were offered to those patients the test identifies as being most likely to benefit from it, then Lilly’s market share in sepsis could increase from 5% to 30%. That estimate is conservative because it is based solely on the patient group (37%) for which the drug offers the strongest and clearest potential benefit. Sirius believes its product, currently in the validation stage of development, will become the “gatekeeper” diagnostic test to help guide physicians in their treatment of all sepsis patients. The management expects that the time to market for this innovative product will be under two years.

The potential of personalized medicine to increase Xigris use has not been lost on Lilly. As a result, in 2006 the company announced a collaboration with Biosite Inc. (www.biosite.com, which was acquired in June 2007 by Inverness Medical Innovations, Inc.) to develop a clinical trial intended to validate the use of Biosite’s diagnostic test to guide Xigris treatment (4). This test uses a protein marker the company believes will help determine which patients might be helped by Xigris treatment as well as the appropriate dosing and duration of said treatment. Data from the trial, which began patient recruitment in 2008, could advance Xigris therapy by helping doctors provide the appropriate doses to the right patients at the right time.

So The Future Is Brighter

At first glance, the diagnostic tests developed by Sirius Genomics and Biosite seem destined to reduce the potential Xigris market from all patients with severe sepsis to only those who would most benefit from Xigris therapy (clearly the antithesis of the “blockbuster drug” model). In this case, however, the increased clarity provided to physicians using these diagnostic tests is likely to alleviate their reluctance to prescribe the drug. Once they are validated, demand for both diagnostic tests should be high, and their use should provide the catalyst for Lilly to drastically increase its sepsis market share.

Development work being done by these two diagnostics companies is part of a greater shift occurring in the healthcare industry from diagnosis and treatment developed for people in general to individuals in particular. This may also encourage a new collaborative environment between biotechnology and “big pharma” companies. And the Xigris brand may yet prove to be one of the industry’s genuine breakthroughs — as well as a case study of how personalized medicine can add value to the pharma business.