Current downstream processing strategies for recombinant proteins often require multiple chromatographic steps, which may lead to poor overall yields. Product purification can be especially difficult when a target protein displays reduced stability, forms isoforms or misprocessed variants, or needs to be purified from a complex mixture containing a high degree of contaminants.

One technology that has been developed to tackle such limitations is based on custom-made chromatography matrices containing camelid-based single-domain antibody fragments. With a molecular weight of only 12–15 kDa, these fragments are significantly smaller than conventional antibodies (with molecular weights 150–160 kDa). These consist of one peptide chain of ~110 amino acids, comprising a single monomeric variable domain of a camelid heavy-chain only antibody (VHH) (Figure 1). 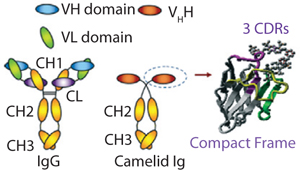 Like in conventional VH, the core structure of a VHH immunoglobulin domain is formed by four framework regions. Three complementarity-determining regions (CDRs) are involved in the specific antigen recognition (Figure 1).

VHH domains possess a similar affinity to antigens as whole antibodies, but also come with many advantages for biotechnological applications (1). Because of their single-domain nature, they can be more easily genetically manipulated and high expression rates can be reached. Their increased hydrophilicity results in a high solubility and a very efficient refolding process that in turn leads to high physicochemical stability. Their comparatively small sizes enable them to recognize and bind hidden antigenic sites.

Those unique properties — stability, affinity, and selectivity — are taken advantage of in CaptureSelect products (BAC, now part of Life Technologies). The company creates affinity ligands and affinity resins using a proprietary technology based on camelid-derived VHH fragments for biopharmaceutical purification.

The specificity of such a ligand can be finely tuned — ranging from broad to very narrow — depending on factors such as species, antibody class, subclass format, and glycoform. Specific features can be incorporated into a screening process such as binding, elution, column-regeneration, and cleaning conditions. For example, we have isolated ligands that have the ability to elute at near-neutral pH values, thereby protecting valuable biologics. The binding affinity is in the nanomole range and can be optimized for both capture and scavenging applications. Such high affinity enables capture of biotherapeutics even at very low concentrations. Because the DNA that codes for each ligand is amplified by PCR and subsequently cloned and expressed in baker’s yeast, all ligands are non–animal-derived. In addition, they work on any solid support. CaptureSelect affinity ligands offer a broad spectrum of purification applications ranging from molecules such as monoclonal or polyclonal antibodies and Fab fragments to plasma proteins, clotting factors, hormones, and viruses.

Case Study: In collaboration with Minapharm Pharmaceuticals, we applied the CaptureSelect platform to develop a ligand for the purification of the human follicle-stimulating hormone (FSH). As a member of the glycoprotein hormone family, FSH plays a pivotal role in the development and function of the reproductive system (2). It is widely used in developmental and reproductive medicine (both diagnostically and therapeutically), especially for treating infertility through stimulation of ovarian follicle maturation. FSH preparations from human menopausal urine have been available since the 1960s. Advances in biotechnology have only recently enabled the industrial production of recombinant-DNA–derived human FSH.

FSH is a heterodimeric glycoprotein with a molecular weight ~30 kDa. The protein dimer contains two polypeptide alpha and beta subunits. Each subunit features two carbohydrate chains that are N-linked to asparagine residues and compose ~28% of the total FSH mass.

The aim of our collaboration was twofold. In the first part, an FSH-specific resin based on camelid VHH was developed. In the second part, it was used in the downstream process for affinity purification of recombinant human FSH from feedstock material expressed by Chinese hamster ovary (CHO) cells. We generated FSH-specific affinity ligands using a three-step approach.

Generation of a Target Library: Llamas were immunized with target (human FSH), and we constructed ligand expression libraries.

That resulted in affinity ligands with high selectivity for recombinant human (rh) FSH showing no detectable cross-binding to the contaminants present in the CHO-cell–derived source material. Binding analysis showed no reactivity toward a single alpha or beta chain of FSH, indicating selectivity for intact FSH only.

We applied this affinity resin in the downstream purification process for rh-FSH. For the production, a CHO-DG44 system expressed rh-FSH. We cultivated the CHO cells for 10 days in a traditional fed-batch process using a disposable bioreactor with a volume up to 200 L. Compared with the international reference standard of the NIBSC 92/642 (10.000 IU/mg FSH), this bioprocess yielded a specific activity between 8.660 and 12.290 IU/mg as measured using a Steelman-Pohley assay. That resulted in a productivity of >500 IU/mL cell culture supernatant. 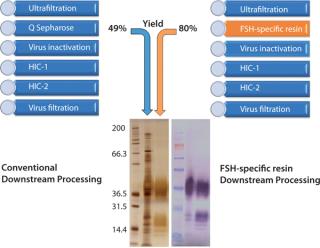 To assess the quality of our downstream purification protocol applying the novel FSH-specific ligand, we compared it with a conventional downstream process using anion exchange chromatography (using Q Sepharose FF). Protein yield within this one step could be increased from 49% to 80%. We then separated the eluate from both processes using gel electrophoresis to compare purity (Figure 2). Silver staining (LEFT) after the conventional process reveals multiple bands over a wide size range, whereas only the bands at 35 kDa and around 17 kDa correspond to FSH when compared with a Western blot using a monoclonal anti-FSH antibody (RIGHT). By contrast, we achieved a
much higher purity after a purification step using FSH-specific resin, and the visualized bands correspond to FSH only. Table 1 shows purities and yields for each chromatography protocol step. Purity within the capture chromatography step could thus be increased from 40% to 80%. The overall downstream process yield after all seven steps of the protocol were completed increased threefold, from 11.3% for the conventional process to 33.4% for FSH-specific resin. We analyzed the glycoprofiles of the purified FSH using hydrophilic-interaction chromatography (HIC), in which separation results from charging and structural differences and compared results between both purification protocols (Figure 3). In general the complexity of the glycans from S1 to S11 increases. For FSH-specific resin, the dominant glycans S3 and S5 are slightly less pronounced than in the conventional pathway, whereas the other structures are more represented.

For interpretation, these data must be considered together with those of the capillary electrophoresis and IEF (Figure 4). The IEF shows that isomers with more acidic isoelectric points (pIs) are more strongly represented after FSH-specific resin purification than with conventional method. Our results were confirmed using capillary electrophoresis. In brief, acidic isomers are more favorable, as shown with FSH-specific resin or the World Health Organization (WHO) standard FSH. This is because of a high level of in vivo activity based on their longer half-life compared with the more basic isoforms, which are thus more quickly excreted by the body. Figure 5 represents our findings. 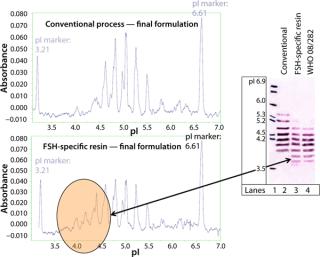 We measure biological activity of the two FSH fractions two ways: in vivo in rats (Steelman–Poley assay) and in vitro in a cell-based assay followed by an enzyme-linked immunosorbent assay (ELISA). Both tests independently show an increase of activity when FSH-specific resin purification is used. 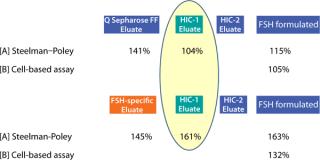 This collection of affinity resins allows development of processes for all major biosimilars in a reduced amount of time while removing steps from originator processes and increasing overall yield. They enable two important attributes that are key in biosimilar or biobetter development: a high speed to market using a “plug-and-play” purification process and an increased yield of the final product. Both lead to a reduced cost of goods. Moreover, their use in the capture step allows a platform approach to biosimilar purification, thereby reducing time spent on process development and simplifying production in multipurpose facilities, both in terms of hardware and as auxiliary resin and filters needed for polishing.