The enabling value of monoliths was strongly in evidence at the 4th International Monolith Symposium, held 29 May – 2 June in the Adriatic resort city of Portoroz, Slovenia. Forty-seven oral presentations and 34 posters highlighted important advances in vaccines, gene therapy, phage therapy for infectious disease, and monoclonal antibodies, as well as continuing advances in the performance of monoliths themselves. As these fields advance in parallel, it becomes increasingly apparent that monoliths offer industrial capabilities substantially beyond traditional methods.

Monoliths are chromatography media cast as a single integrated unit. This is in contrast to porous particles packed in a column or membranes cut and configured to support practical use. The features that first brought monoliths to prominence were their abilities to maintain high resolution and capacity regardless of the flow rate and size class of the molecules they separate. Such features result from their unique architecture, which supports mass transport by convection. Monoliths also provide a low-shear fractionation environment that supports uniquely high functional recoveries of shear-sensitive products such as DNA plasmids, live viruses, and labile proteins.

Capacity: Monoliths have lower surface area per unit volume than columns packed with porous particles. As a result, monoliths generally have lower capacity for small biomolecules, but this trend may be changing. Frantisec Svec (professor at UC Berkeley and director of the Molecular Foundry at Lawrence Livermore Laboratories) presented the symposium-opening keynote in which he described recent work integrating nanoparticles into monolith structures to increase surface area. This brings monolith capacity nearly on par with porous particle media, even for proteins as small as 12 kDa. Professor Giorgio Carta (University of Virginia) later presented on the use of grafting methods to increase binding capacity, and it seems reasonable to anticipate that fusion of these approaches may bring the advantages of monoliths to biomolecules of all sizes. 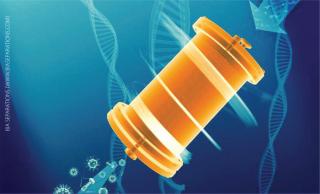 Despite relatively low protein binding capacity, the high capacity of monoliths for large molecules makes them good candidates for removing DNA and viruses when a protein of interest flows through the support. This characteristic was highlighted by Joe Zhou (CEO of Genor BioPharma in Shanghai), who discussed the benefits of integrating anion-exchange monoliths into IgG purification: DNA capacities range 10 – 40× higher than porous particles, and virus binding capacities 10 –100× higher.

Another regulatory advantage of monoliths over porous particles derives from the fact that large-molecule capacity and separation performance are independent of flow rate. That suspends the need to narrowly define residence-time requirements, which encumbers porous particle media. Zhou commented that the recent availability of disposable/reusable monoliths is likely to accelerate their acceptance into manufacturing applications for all biopharmaceuticals.

Immunoglobulin M (IgM): The large size of IgMs makes them natural candidates for monolith purification. These million-Dalton antibodies are gaining commercial momentum because of their ability to discriminate glycosylation variants. Rapidly emerging applications include cancer and stem cell therapies as well as treatment of infectious diseases. Recent clinical trials with an antipneumonia IgM demonstrated 100% success (1).

Pete Gagnon (Validated Biosystems) presented data demonstrating that monolithic anion exchangers are uniquely effective for dissociation of IgM:DNA complexes. In such case, a porous-particle anion exchanger was unable to achieve any dissociation. Superior performance by monoliths may reflect their higher charge density or their higher DNA binding capacity, but the practical result is more effective DNA clearance. Additional data demonstrated that complexation also afflicts IgG, and probably a wide range of other products, including plasmids and vaccines. Thus the complex-dissociative abilities of monoliths may reduce patient risk for a broad range of biopharmaceuticals.

Conjugates: Professor Mark Etzel (University of Wisconsin) presented recent work with purification of protein-oligosaccharide conjugates. He showed experimental data contrasting the performance of a porous-particle cation exchanger optimized specifically for conjugate purification, with the corresponding commercial monolith. Monolith productivity was 65× higher, with 30% lower buffer consumption and superior purity. The last point may reflect a fundamental limitation in porous-particle ion exchangers. Electrostatic interactions combine with diffusion to enhance binding efficiency during sample application, but when eluted with salt, the attractive force is merely suspended, leaving only diffusion to transport proteins out of the deep pore space. That becomes highly limiting with large biomolecules because of their slow diffusion constants, causing them to elute in broad trailing fractions that increase the likelihood of contamination with residual conjugate byproducts. Etzel remarked that the benefits of monoliths apply equally to polyethylene glycol conjugates, which are used increasingly by biopharmaceutical companies to increase in vivo residence time and suppress immunogenicity of recombinant protein therapeutics.

Vaccines and Gene Therapy: As expected, purification of virus and virus-like particles (VLP) was a major focus of the meeting, with two full presentation sessions and many more applications illustrated in posters. The speed and high capacity of monoliths are major attractions in these fields. Dynamic binding capacities of 1010–1016 particles per milliliter were described for a diverse spectrum of virus species and VLP. Matjaz Peterka (BIA Separations) presented a monolith-based platform for purification of influenza virus. Influenza A strains H1N1, H5N1, H3N2, and influenza B were accommodated with equal effectiveness. Catherine Sims (Eden Biodesign) presented a similar platform for purification of adenovirus. Both presenters remarke
d that the ability of monoliths to accelerate process development and increase manufacturing productivity were major factors in their selection over traditional chromatography media.

Sims also provided examples of monoliths used for in-process monitoring of virus purification procedures. About 40% of the volume of a column of porous particles comprises the empty space between particles: the void volume. Turbulent mixing in the void spreads and dilutes solute zones as they pass the length of a column. This degrades resolution and reduces peak height, especially for large solutes with low diffusion constants such as virus particles. Monoliths have no void volume. Long separation gradients produce a higher degree of fractionation; peaks remain sharp, and sensitivity remains high. With a run-time of only 10 min, a monolith-based assay for Ad5 was four times faster and 17.5× more sensitive than the porous-particle version. The assay accommodated samples from all stages of purification and provided documentation of host cell DNA reduction through the process.

Thomas Muster (Avir Green Hills Biotechnology) shared recent clinical results of his company’s monolith-purified, recombinantly attenuated, live flu vaccine, which is administered by nasal mist. Unlike inactivated vaccines, live intranasal influenza vaccines stimulate production of local secretory IgA and can elicit cell-mediated immunity. They offer potentially higher safety as well, due to their inability to replicate. Monoliths are an important enabling technology for producing this vaccine, because a low-shear environment is crucial for achieving 75% recovery. Muster also commented on the ability of monoliths to suspend the purification bottleneck in vaccine manufacture. A single 8-L monolith can process 2.4 million doses of vaccine per 30-min cycle.

Other Applications: Antibiotic replacement with bacteriophages represents another important and rapidly emerging area of virus-based therapy. Anneleen Cornelissen from the Laboratory of Gene Technology in Belgium introduced several dramatic case studies, including one demonstrating the ability of phage therapy to rapidly cure an ulcerative pseudomonad infection unresponsive to more than a year of aggressive treatment with antibiotics. Phage therapy promises similar improvements in other areas in which antibiotic resistance imposes dangerous limitations on the ability of medical practitioners to combat severe bacterial infections. Cornelissen demonstrated the ability of monoliths to reduce the overall purification cycle from three days to one. She also remarked on the issue of cesium toxicity in traditional processing, which often reduces active phage recovery to <0.1%. The monolith process supported >70% recovery. Petra Kramberger of BIA Separations presented comparable results with a Staphylococcus aureus bacteriophage.

Monoliths have already become well established for purifying DNA plasmids. Speed and high capacity are important factors, but their low-shear properties may be the decisive factor, especially for the emerging generation of very large multigene plasmids. Nika Lendero Krajnc (BIA Separations) illustrated results from a 39.2-kbp plasmid with dimensions of ~1.4 × 0.4 µm, and a 62.1-kbp plasmid with a 2.1-µm length. Shear-related damage on anion-exchange monoliths was absent at linear flow rates

Yow-Pin Lim (Prothera Biologics) expressed his enthusiasm for continuing developments in the field, and the next conference. “In the 20 years since their introduction, we’ve seen monoliths transform purification of plasmids and virus, and still they remain one of the most dynamic and vital areas in the field of chromatography. It will be really interesting to see what the next 20 years bring.” Symposium proceedings will be published in Journal of Chromatography, and the abstract book can be downloaded at www.monolith-events.com

Author Details
Pete Gagnon is chief scientific officer at Validated Biosystems and member of the BPI Editorial Advisory Board; pete_gagnon@mac.com.