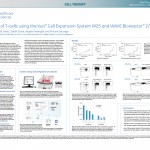 Immunotherapeutics include drugs and biologics that render therapeutic benefit by harnessing the power of the immune system. The promise of immune-mediated therapies is to target specificity with a consequent reduction in off-therapeutic effects. Immunotherapeutic products can be classified broadly into (1) active immunotherapy (therapeutic vaccines), (2) adoptive cellular immunotherapy (transfer of immune cells, genetically modified T-cells or precursor cells) or (3) passive immunotherapy (antibody or receptor ligand administration). Recent scientific advances have led to clinical trials of both active and passive immunotherapeutic products that have the potential to convert life-ending diseases into manageable conditions. Of the three broad categories of immunotherapeutic products, adoptive cellular immunotherapy products are the most recent to show early signs of benefit and therapeutic value to the patient population. The successful manufacture of cellular immunotherapeutics requires a system that can minimise the risk of cell contamination, achieve high cell densities, allow careful control of the expansion protocol and is designed for use in a regulated environment. The Xuri Cell Expansion System W25 uses a functionally closed, single use bioreactor for working volumes up to 25 L. The system is based on the well known WAVE rocking technology that provides mixing and aeration to the culture. With the Xuri Cell Expansion System W25, the rocking mode is enhanced with features such as advanced sensors and intelligent control strategies. Data presented here demonstrate the equivalent yield and functional performance of cells expanded in the WAVE 2/10 and Xuri W25 systems using comparable culture protocols. The expanded T cells remain biologically functional and can be re-activated to produce high amounts of cytokines.