Lysosomal storage diseases are caused by mutated genes that express defective lysosomal proteins, such as essential enzymes. For example, cystinosis is a metabolic disease caused by a defective gene that encodes cystinosin, an exporter protein (Figure 1).

Avrobio develops gene therapies to treat lysosomal storage diseases. On 8Â October 2019, the company announced that its first patient had been dosed in the AVR-RD-04 investigational gene therapy program, which involves genetic modification of the patientâ€™s own hematopoietic stem cells to treat cystinosis. The company also has clinical-stage programs in Fabry disease and Gaucher disease, both of which are also lysosomal storage diseases. Avrobioâ€™s technology platform includes an automated, closed-system process for manufacturing gene therapies. Below, Kim Warren (head of operations) discusses the use of lentiviral vectors in gene therapy and highlights the applications of the companyâ€™s plato platform.

Why Use Lentiviral Vectors?
Many lysosomal storage diseases are well understood, and enzyme replacement therapy (ERT) has been a treatment option for some of them. However, ERT does not address the underlying cause of those diseases and thus is not a complete replacement for normal functional enzymes. Because of ERTâ€™s short half-life in blood, enzyme activity spikes after treatment but then drops quickly to near zero. So the patient requires multiple infusions. A patient with Fabry disease, for example, requires ERT infusion every other week.

Even with ERT, many patients with lysosomal storage diseases face significantly shortened life spans. ERT helps relieve associated symptoms, but many patients still have serious unmet needs. Those can include major organ and muscle deterioration, central nervous system complications, and overall compromised quality of life.
Lentiviral vectors are used mostly for ex vivo gene therapy and are designed to deliver stable and durable integration of transgenes into a patientâ€™s hematopoietic stem cells.

The process begins with harvesting CD34+ stem cells from a patient. Those cells are modified by using a lentiviral vector to insert a transgene that will enable production of a functional protein such as an enzyme. The modified stem cells are infused back into the patient, where they engraft in the patientâ€™s bone marrow. The cells divide to produce daughter cells, all carrying the transgene for the functional protein needed by those cells. In some cases, a protein is secreted to help other cells that have the defective gene, a process called cross-correction.

Avrobio hopes to leverage the ex vivo lentiviral gene therapy process to deliver consistent, systemic, and stable enzyme activity throughout a patientâ€™s body and brain, potentially resulting in what the company believes could be a transformational benefit for people with lysosomal storage disorders. Candidates in clinicals trials are now under investigation. 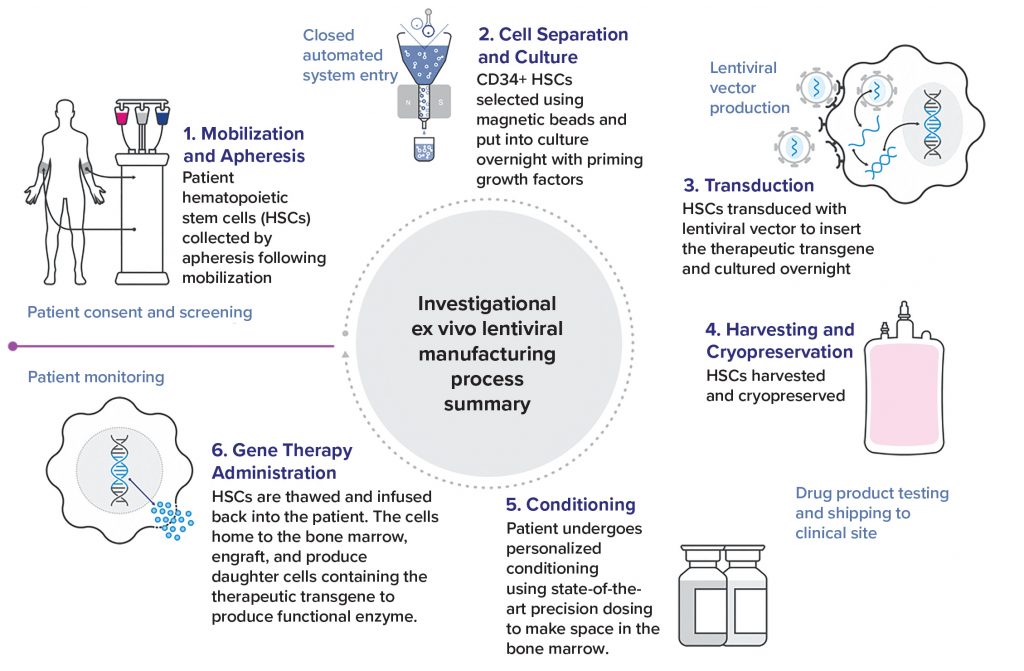 Process Development
Once patients are screened and enter clinical trials, they are treated with a widely established drug regimen that enables hematopoietic progenitor and stem cells to be released from bone marrow into the blood stream. Cells are harvested using apheresis, and the apheresis unit from a patient is sent to Avrobioâ€™s regional manufacturing site for cell processing. The apheresis unit bag is placed on a device that performs operations using a single-use disposable tubing set. On the first day, hematopoietic cells are enriched from the apheresis unit using magnetic beads coated with antibodies to CD34.

The CD34+ cell surface marker identifies hematopoietic progenitors, including stem cells. Those cells then are placed into a culture chamber, incubating overnight with growth factors. This is the â€śpriming step,â€ť which prepares cells for the next day when the vector is added. The vector will insert the correct version of the disease-specific human transgene into the CD34+ cells, which are incubated again overnight. The next day, cells are harvested and cryopreserved in a bag to return to the clinical site.

Making the cell product takes a few days, but some activities are conducted before and following drug-product manufacture. The vectors are designed for each program, and the plasmids that make up the vector also must be manufactured. Avrobio uses a platform-type process for its vectors across multiple indications. The process starts with a four-plasmid system, bringing a level of increased safety. Three out of Avrobioâ€™s four plasmids are identical for the companyâ€™s indications, and the fourth carries the transgene which is unique to the specific indication. The company believes that process will allow scalability and cost effectiveness by keeping three of the four plasmids the same.

Plasmids are supplied to a vector manufacturer, which produces the vectors in suspension culture of human embryonic kidney (HEK) 293T cells. Vector production in suspension culture is intended to facilitate scalability and cost effectiveness, along with serum-free, chemically defined media, which can facilitate increased safety and consistency. Production can be scaled up to 200 L as needed. Vectors are produced in bulk for each indication and then sent to the drug-product manufacturing site to modify the patientâ€™s cells.

Once a drug product is cryopreserved, Avrobio performs all release testing, which can take 45â€“60 days. Once released, a drug product is shipped to a clinical site. At that point, a patient returns to the clinic, receives personalized conditioning that uses state-of-the-art precision dosing to prepare bone marrow for engraftment, and then receives the drug product by intravenous infusion. The patientâ€™s own gene-modified cells home back to the bone marrow where they can engraft. During the trialâ€™s posttreatment follow-up, the patientâ€™s blood and other tissues are monitored for biomarkers such as enzyme activity levels, substrate reduction, and presence of the transgene.

Product Stability
Cryopreservation provides some conveniences for patients and healthcare providers. Products can be fully tested, and clinic visits can be planned to accommodate patientsâ€™ schedules. Cryopreserved cells are extremely stable. They are similar to other products used for autologous stem-cell transplantation, which typically uses the same processes â€” although those cells are not gene modified. Shipping isnâ€™t expected to be a challenge because dry shippers are used to maintain a drug product at liquid-nitrogen temperatures. With good scheduling, patients are not inconvenienced, and a patient and manufacturer can be matched up without compromising product quality.

Manufacturing a drug product with a fresh apheresis unit from a patient is important. That is one of the drivers of Avrobioâ€™s regional manufacturing network. The company current clinical process uses a Miltenyi Biotec CliniMACS Prodigy system, which is an automated closed system intended to facilitate safety and cell quality.

Automating the process facilitates reproducibility and helps in training operators for drug-product manufacturing. That is important especially because the company has three sites. With a closed system, it may be possible to have multiple units in a single cleanroom â€” perhaps even different indications within the same cleanroom â€” and manufacture in a lower-grade cleanroom once proper controls are established.

Platform Processes for Other Indications
Avrobio has developed its plato platform processes to enable easy movement into addressing other rare-disease indications. The platform builds on the companyâ€™s work from previous indications. The system begins with plasmids, three out of four of which are in common to other indications. Vectors are made using the same process for each indication, so the process to make a drug product remains nearly the same for each indication. The only difference is the use of a specific vector for that specific indication. A few release tests, such as potency, are indication-specific, but many of them are common across indications. Avrobio believes that the regulatory pathway across its portfolio should be reasonably similar across different indications.

Maribel Rios is managing editor of BioProcess International, a part of Informa Connect;
maribel.rios@informa.com. Kim Warren is head of operations at Avrobio.