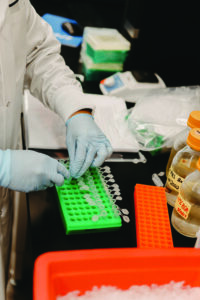 A multidisciplinary area of research, synthetic biology involves the use of genetic engineering to create new biological parts, devices, and systems, with potential applications in industries such as healthcare, agriculture, energy, and environmental science. As early as the 1960s, researchers combined advanced techniques in precision genetic engineering with rational drug development and explored approaches in synthetic biology to support development of innovative drug products. Later research shed new light on how molecular networks regulate cellular function and how gene expression is regulated within cells. Building on that, subsequent advances in molecular biology and DNA sequencing helped to identify and validate strategies that could ŌĆ£programŌĆØ or engineer bacteria to perform different functions that in turn could deliver therapeutic benefits to patients. In recent years, synthetic biology has become firmly established as a rapidly advancing field of research. It has potential applications in the development of biopharmaceuticals to treat a broad range of conditions, including rare diseases, metabolic conditions, and autoimmune and inflammatory diseases.

Synlogic is one of the first companies formed with the goal of designing and developing potential biotherapeutics based on synthetic biology. The company was founded in 2014 by two Massachusetts Institute of Technology professors and experts in synthetic biology, Jim J. Collins and Tim Lu. They pitched the idea of a biotechnology company focused on drug development based in synthetic biology to Atlas Ventures in Cambridge, MA. The company since has opened five clinical-stage investigational new drug (IND) applications with the US Food and Drug Administration (FDA). The company leverages a breadth of synthetic biology tools to design and develop therapeutics based on genetically engineered bacterial microbes, with an initial focus on treatments for metabolic and immunological diseases, including phenylketonuria (PKU), homocystinuria (HCU), and enteric hyperoxaluria (EH). All drug candidates are administered orally and include a ŌĆ£starter strainŌĆØ or chassis probiotic bacterium known as Escherichia coli Nissle 1917.

For metabolic and immunological diseases, the team at Synlogic engineers E. coli Nissle to play a precise role in the gastrointestinal (GI) tract, focusing on the degradation and production of metabolites that are relevant to disease.

Designing Synthetic Biotics
The potential to design a new generation of drug products based on synthetic biology and engineered bacteria ŌĆö which are known as synthetic biotics ŌĆö is based on a deep understanding of the switches and programmable genetic systems. Those systems enable the design of gene circuits to activate, inhibit, or modulate activity to treat disease. My company combines expertise in disease physiology, molecular biology, and microbial engineering with a library of proprietary tools and modular components, including metabolic gene circuitry and regulatory genetic switches. Those components are applied in a multistep, reproducible, and target-specific process. Synlogic focuses on the three key goals described below.

Assess the Problem: We start by working to understand the underlying mechanisms or metabolic dysfunctions that cause a disease. That involves comprehensive assessments of biological data and existing literature to identify and validate potential molecular targets. For example, we assessed GI component and role of diet restriction when evaluating PKU and HCU as potential target indications. In some cases, we might use predictive modeling and bioinformatics to understand the levels of target metabolites in patients and whether they are in an optimal range that would make our approach well suited as a potential treatment.

Design Solutions: Using molecular biology techniques, we assemble and test prototypes that can carry out specific functions, such as consuming toxins, regulating cellular function, and targeting drivers of disease. We investigate their activity level in vitro and determine whether the prototypes meet predefined criteria related to the mechanisms of action.

That process involves DNA assembly to target candidate pathways, mathematical models to predict a pathwayŌĆÖs efficiency, proprietary switches and parts to permit control of engineered circuits, and selection of an optimal microbial ŌĆ£chassisŌĆØ or vehicle to carry a therapeutic. Such a process led us to select the well-studied probiotic E. coli Nissle as the chassis for all of SynlogicŌĆÖs development programs to date.

Build Synthetic Biotics: Once we identify and validate the optimal elements in our uniquely designed synthetic biotics, we use standard molecular techniques to insert genetic circuits into the chassis and ensure genetic stability. We construct bacterial strains with key elements for development such as the generation of auxotrophs, which are unable to synthesize one or more essential growth factors. The synthetic biotics are grown under controlled manufacturing conditions, lyophilized, and formulated into a stable powder that can be administered orally. Unlike other approaches to developing live biotherapeutics, our synthetic biotics are designed to be nonreplicating, noncolonizing, and reversible by rapid GI clearance. 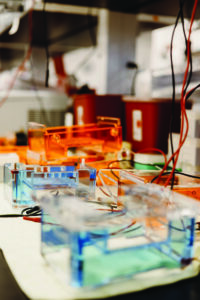 Addressing Rare Metabolic Diseases
Based on research thus far, we are developing synthetic biotics that deliver therapeutic benefits safely and effectively through orally administered, nonsystemically absorbed, GI-based interventions. We are focused on engineering synthetic biotics to remove toxic metabolites from the GI tract. Our initial therapies are being developed for diseases in which therapeutic dietary restriction has provided biological validation for our approach, as is the case for our lead programs in PKU, HCU, and EH.

PKU is a rare genetic disease caused by the inability to metabolize or break down phenylalanine (Phe), an amino acid found in many foods, including vegetables, breads, and cereals. Over time, the toxic buildup of Phe can lead to severe neurological disorders and developmental delays in patients, making early intervention critical to enable normal cognitive development. For that reason, PKU was one of the first diseases mandated to be included in newborn screening panels in the United States and other countries. To prevent severe intellectual disabilities, patients must adopt a life-long, severely restrictive low-protein diet designed to help manage Phe levels. Although a few treatments are approved for PKU, they are inadequate for about 75% of patients who are either unresponsive or for whom treatment presents unacceptable safety risks.

Researchers at Synlogic have made significant progress in development of the investigational synthetic biotics SYNB1618 and next-generation SYNB1934, which are engineered strains of E. coli Nissle encoding phenylalanine ammonia lyase (PAL), an enzyme that breaks down Phe. They are designed to metabolize Phe in the GI tract and convert it into a harmless metabolite (called tricarboxylic acid, TCA), thereby reducing plasma Phe levels and potentially making it possible for patients to consume higher levels of natural protein in their diets. It is important to note that SynlogicŌĆÖs approach to PKU is intended for patients who currently have no other viable therapeutic options to further reduce Phe levels. Our synthetic biotics are being studied as both monotherapies and adjunctive treatments, with potential use with existing treatments to maximize treatment effectiveness.

HCU is caused by the loss of function of the enzyme cystathionine beta-synthase, which results in the toxic buildup of homocysteine and its metabolites in human blood and urine. Symptoms include life-threatening strokes caused by thromboembolism, lens dislocation, skeletal abnormalities, and intellectual disability. Similar to that for PKU, HCU disease management involves adopting a highly restrictive diet (low in methionine, a precursor to homocysteine), and currently approved treatment options offer limited efficacy and present tolerability issues.

Synlogic is developing the SYNB1353 synthetic biotic for the potential treatment of HCU. It is an engineered strain of E. coli Nissle that consumes methionine in the GI tract to prevent the accumulation of homocysteine. That strain was developed as part of a research collaboration with Ginkgo Bioworks. We have promising preclinical data from nonhuman primates and mouse models showing that weŌĆÖre able to lower blood homocysteine levels, which have helped support the advancement of this strain into IND-enabling studies.

EH is the subject of SynlogicŌĆÖs third metabolic program. It is a chronic, progressive disease caused by an underlying GI disorder that causes patients to absorb too much oxalate from their diet. That buildup of oxalate crystallizes in the kidneys, causing crystal and stone formation, which manifests as severe pain and may require intervention to pass the stones. There is an established and linear relationship between oxalate levels and stone formation. Our SYNB8802 synthetic biotic is designed to metabolize oxalate in the GI tract. It converts excess oxalate into a harmless metabolite (called formate) for excretion, thus lowering urinary oxalate levels.

In a phase 1 study of healthy volunteers who were fed a high oxalate diet to increase urinary oxalate levels, the SYNB8802 synthetic biotic achieved proof of mechanism and demonstrated robust, dose-dependent reductions in urinary and fecal oxalate with no serious or systemic adverse events.

Beyond metabolic diseases, synthetic biotics could be used to treat several immunological diseases such as inflammatory bowel disease (IBD), CrohnŌĆÖs disease, and ulcerative colitis, given the known relationship between bacteria and immune response. Such diseases are driven by overactivation of a personŌĆÖs immune system, resulting in chronic GI tract inflammation that can cause severe abdominal pain and GI distress. Given the proof-of-concept and proof-of-mechanism achieved in our metabolic disease programs, we are positioned to target metabolites in the GI tract that are dysregulated in a number of immunological diseases including IBD. In June 2021, Synlogic announced a research collaboration with Roche for developing a synthetic biotic for the potential treatment of IBD.

Promising Future of Synthetic Biology
We are seeing in real time the increasing evidence that leveraging synthetic biology offers potential clinical benefits and may deliver a new generation of drugs with novel mechanisms to treat serious diseases. As leaders in research at Synlogic and elsewhere present data from late-stage research in the months ahead, the biopharmaceutical industry is likely to see new levels of momentum and interest in this rapidly expanding area in biomedical research. The field is offering hope for many patients who are affected by serious diseases with limited or suboptimal treatment options available. It is exciting to be part of this progress and advance drug candidates with the potential to transform the care of patients who live with serious diseases.