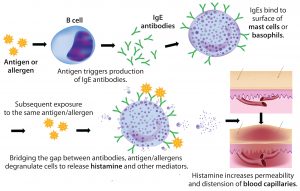 Rapidly increasing use of monoclonal antibodies (MAbs) in the treatment of neoplastic, autoimmune, and inflammatory diseases has led to a dramatic increase in hypersensitivity reactions worldwide, complicating the use of MAbs as first-line therapies and limiting patient survival and quality of life (1). The origins of anaphylaxis are not well understood, though its mechanism is fairly straightforward (Figure 1). It is usually attributed to some undefined intrinsic property or properties of a biotherapeutic â€” despite the fact that biotherapeutic formulations are necessarily complex and include a host of functional excipients. Those help drug products meet the stringent challenges of shelf-life, stabilization, solubility, reconstitution following lyophilization, and the propensity of proteins to aggregate â€” especially at the high concentrations typically used to reduce MAb administration volume and time.

Approximately 70% of all MAb formulations contain either PS-20 or PS-80 (2). Polysorbate (PS) surfactants are one such family of excipients incorporated into many biotherapeutics to prevent protein aggregation and associated loss of efficacy. Although polysorbates are effective in that role, they contain ether linkages (within polyoxyethylene moieties) and unsaturated alkyl chains that spontaneously self-oxidize in aqueous solutions to form immunogenic and anaphylactogenic chemical species, including hydro- and alkyl-peroxides, epoxy acids, and reactive aldehydes such as formaldehyde and acetaldehyde. Polysorbates also hydrolyze in aqueous solutions to release free fatty acids that can increase solution turbidity. Lot-to-lot variability exceeds an order of magnitude in the concentration of chemically reactive species such as peroxides (3).

Immunogenicity of biotherapeutics is a serious and growing concern for the US Food and Drug Administration (FDA) and the European Medicines Agency (EMA). It will continue to have a significant and growing influence on the development and regulatory approval of both biosimilar and new innovator biotherapeutics (4).

Anaphylaxis, on the other hand, is an allergic reaction that, although serious, is generally overlooked and accepted as an unavoidable property of biotherapeutic proteins themselves. Few or no attempts have been made to differentiate and segregate out its actual source in biologics. Although unwanted polysorbate-induced immunogenicity is well documented, little attention has been paid toÂ polysorbate-induced anaphylaxis (5â€“14). Regulatory authorities understandably focus heavily on comparable efficacy in evaluating biosimilars. But similar efficacy does not imply necessarily a similar safety profile between innovator and biosimilar products. Both unwanted immunogenicity and anaphylaxis should comprise major components of safety assessment of biotherapeutics.

Anaphylaxis typically is rapid in onset and manifests over minutes to hours. In some cases, it can cause death (15, 16). The underlying mechanism is a release of mediators from certain types of white blood cells that can be triggered by either immunologic or nonimmunologic mechanisms (16). The most common causes include insect bites, food allergies, and medications.

In the latter category, the commonly used polysorbate excipients PS-80 and PS-20 are found in over 70% of MAb and other protein biotherapeutics, and now they have been shown to cause anaphylaxis in patients receiving those drugs. Anaphylaxis symptoms occur over minutes to hours, with an average onset in 5â€“30 minutes if exposure is intravenous, affecting the skin, respiratory system, gastrointestinal tract, heart and vasculature, and central nervous system (15). Symptoms include hives, itchiness, flushing or swelling (angioedema); lingual, laryngeal, and pharyngeal edema; runny nose, and conjunctival edema. Possible respiratory symptoms include shortness of breath, bronchial spasm, and upper airway obstruction secondary to swelling (17â€“19). Coronary artery spasm can be associated with a drop in blood pressure or shock, sometimes leading to subsequent myocardial infarction, dysrhythmia, or cardiac arrest. Treatments for anaphylaxis include positioning a patient flat and administering antihistamines, steroids, intravenous fluids, and intramuscular epinephrine (17, 20).

Among biotherapeutics, drug hypersensitivity and anaphylaxis have been reported for a number of MAbs â€” rituximab, ofatumumab,Â obinutuzumab, trastuzumab, cetuximab, tocilizumab, infliximab, etanercept, adalimumab, abciximab, golimumab, certolizumab, brentuximab, bevacizumab, and omalizumab â€” all of which are formulated with polysorbate surfactants (1, 5, 21).

Chemical Nature of Polysorbates: Polysorbates play a positive role in biotherapeutic formulations. They prevent aggregation â€” important because aggregated proteins are immunogenic and can induce a patientâ€™s immune system to generate neutralizing antibodies, thus reducing or eliminating the effectiveness of an administered drug. However, a number of shortcomings associated with polysorbates need to be urgently addressed, especially now as biotherapeutics are increasing their role in treatment of a growing number of cancers and other major life-threatening diseases.

Polysorbates are complex esters of structurally diverse and (in some cases) chemically reactive species. PS-20 and PS-80 (Tween 20 and Tween 80) are mixtures of structurally related fatty-acid esters of polyoxyethylene sorbitan and lauric acid or oleic acid, respectively. In PS-20, the monolaurate fraction comprises 40â€“60% of the alkyl chains, with alkyl groups of different chain lengths making up the remainder of the molecules. In PS-80, about 60% of the alkyl chains are derived from oleic acid, with the remainder of the esters derived from other fatty acids (22). All commercially available polysorbates also contain measurable amounts of polyoxyethylene, sorbitan polyoxyethylene, and isosorbide polyoxyethylene fatty-acid esters (22â€“24).

Polysorbates undergo intrinsic self-oxidation yielding reactive hydro- and alkyl-peroxides (25â€“30) as well as reactive aldehydes such as formaldehyde and acetaldehyde (31), which induce immunogenicity of soluble proteins.

Polysorbate-Induced Anaphylaxis
Increasingly the anaphylactogenic properties of PS-80 are wellÂ documented in clinical literature. Identifying the precise mechanistic cause of polysorbate-induced anaphylaxis is complicated by the complex chemical nature of polysorbate surfactants. Preclinical animal studies have identified a number of specific molecular species that induce anaphylaxis.

As early as 1985, Masini et al. demonstrated polysorbate-induced histamine release in peripheral tissues and isolated mast cells as well as hemodynamic responses (32). In 1997, Bergh et al. reported that air exposure to aqueous solutions of PS-80 produced formaldehyde and acetaldehyde in amounts that could elicit allergic reactions in some individuals (33). The latter authors prophetically warned drug developers to take into consideration the possibility that allergenic compounds are formed during manufacture, storage, and handling of products containing polysorbate and chemically similar surfactants.

Coors et al. conducted a thorough examination of PS-80 as an inducer of severe anaphylactoid reactions (34). Their extensive complement of well accepted and sensitive detection methodologies included skin-prick testing, enzyme-linked immunosorbent assays (ELISAs), immunoglobulin E (IgE) immunoblotting, and flow-cytometric detection of basophil activation in control patients and others with a medical history of anaphylactic shock due to intravenous administration of a multivitamin product during pregnancy (a surrogate for intravenously administered drugs). Neither the ELISAs nor the immunoblots identified any polysorbate-specific IgE antibodies, confirming the nonimmunologic nature of the anaphylactoid reaction. This study demonstrated that PS-80 can cause severe nonimmunologic anaphylactoid reactions.

Qiu et al. demonstrated that polysorbate 80 induces typical nonimmune anaphylactic reactions (pseudoallergy) in dogs â€” characterized by the release of histamine and unvaried IgE antibodies (37). PS-80 induced histamine release with a twofold increase in SC5b-9, a 2.5-fold increase in C4d, and 1.3-fold increase in Bb while IgE remained unchanged. PS-80 caused cardiopulmonary distress in dogs and activated their complement systems through classical and alternative pathways, as indicated for both in vivo and in vitro preparations.

With the growing importance and routine use of a growing number of biotherapeutics, clinical reports of polysorbate-induced anaphylaxis are increasing as well. For example, reactions occurred after administration in two patients receiving omalizumab (38). Intradermal testing produced significant wheal and flare reactions (hives and angioedema) to PS-20 that did not appear in negative control subjects. In vitro and in vivo immunologic data support the conclusion that adverse reactions experienced by the two patients after more than a year of successful omalizumab therapy were likely anaphylactoid in nature. The authors of an earlier report of unexplained omalizumab anaphylaxis had notÂ considered the possible association with PS-20 (39).

Patients receiving the red-cell growth hormones darbepoietin and erythropoietin also have developed hypersensitivity reactions (40). Based on subsequent skin testing and observed clinical symptoms, investigators concluded that the cause of those reactions was the excipient PS-80. The authors also believe that might have contributed to a related incidence of pure red-cell aplasia.

Badiu et al. reported multiple cases of PS-80â€“induced anaphylaxis arising from administration of a number of vaccines (42). A 17-year-old girl experienced generalized urticaria, eyelid angioedema, rhinoconjunctivitis, dyspnea, and wheezing an hour after her third intramuscular administration of Gardasil quadrivalent human papilloma virus vaccine (Merck), which contains PS-80. Intradermal tests were positive with that product, whereas skin tests with the bivalent vaccine (not containing PS-80) were negative. Prick tests of PS-80 were positive in the patient and negative in 10 healthy controls. The CD203 basophil-activation test result was negative for PS-80 at all the tested dilutions, and no specific IgE was found. The authors also skin-tested two influenza vaccines: one containing PS-80 (Fluarix from GlaxoSmithKline), which resulted in a positive reaction, and another flu vaccine with no adjuvant or preservative (Vaxigrip from Sanofi Pasteur MSD), which gave negative results.

LimayeÂ  et al. reported a case of an allergic reaction to erythropoietin in which a patient developed generalized pruritis, erythema, and orofacial angioedema (43). The Eprex erythropoietin formulation (Johnson & Johnson) contained recombinant human erythropoietin and PS-80 as an excipient (0.15 mg/mL). Skin-prick and sequential intradermal testing with increasing concentrations of that and Amgenâ€™s Neupogen filgrastim (containing polysorbate at 0.04 mg/mL) gave positive reactions, whereas a polysorbate-free erythropoietin preparation yielded negative test results. Intradermal testing with pharmaceutical-grade polysorbate resulted in a positive local reaction followed by mild orofacial angioedema an hour later. No reaction was observed in a control subject (43). Purcell et al. also identified polysorbate 80 as the likely cause of an immune response to erythropoietin when human albumin was replaced by polysorbate 80 and glycine (44).

Drug hypersensitivity and anaphylaxis has been reported for Factor VIII, darbopoietin, erythropoietin, and a number of MAbs, all of which contain a polysorbate surfactant (1, 5, 21, 43). Urticariform lesions have been described in patients undergoing treatment with infliximab, adalimumab, etanercept, and ustekinumab â€” four MAb drugs containing polysorbate 80 (45â€“47). In addition, polysorbate-induced anaphylactic responses have been reported in nonbiologic drug classes containing polysorbate: vitamin A (48), certain steroids (49â€“51), and the antiviral drug acyclovir (52).

Separating MAb-Induced from PS-Induced Anaphylaxis
Although it is clear that polysorbates can and do induce anaphylactic responses, it seems that no current clinical trials attempt to differentiate anaphylaxis induced by polysorbates from that induced by drug substances. To do so, separate vehicle studies would have to be conducted. Anaphylaxis occurs in just a small fraction of patients, all of whom have had different exposure histories to polysorbates from earlier treatments. So selecting multiple control cohorts (those with no previous polysorbate exposure and those with previous exposure over different timeframes) is prohibitively expensive and would add further costs to the already expensive process of clinical testing and regulatory approval. Substituting alternative nonionic surfactants such as alkylsaccharides in biosimilars, then comparing anaphylaxis rates in clinical trials might begin to answer this question (3, 4).

Preventing the Problem
Clinical and commercial incentives to replace polysorbates are clear. For innovator biotherapeutics, minimizing anaphylaxis would offer significant clinical and safety benefits to patients â€” possibly reducing the time and cost of pretreatment with antihistamines and steroids. With more than 900 biosimilars and more than 600 biobetters currently in development (53), concerns about the high development costs have led some industry experts to conclude that the price of biosimilars may be only 20% lower than that of corresponding innovator products.

That raises a barrier for physicians to justify switching patients away fromÂ well-characterized innovator products to newly introduced biosimilars without some clear and substantial clinical benefit on offer. Replacing polysorbates with surfactants that minimize anaphylaxis episodes without allowing progressive protein degradation or increased immunogenicity would meet a critical need while providing a substantial differentiating clinical benefit for all concerned: patients, physicians, and third-party payers.