Shake flasks are commonly used for small-scale culture of mammalian suspensions. Incubators provide a suitable environment with carbon dioxide (CO2) supply and humidity control and ensure sufficient oxygen transfer and homogenization of cell suspension by appropriate mixing. To match scale-up parameters, users can adjust power inputs by changing the shaking frequency and eccentricity of the shaking movement or by modifying the working volume of the shake flasks. No reliable system for automated feeding and sampling at shake flask scale is yet available, so it is necessary to take flasks out of their incubator to do so. Such disturbances can affect the metabolism and overall performance of cultivated cells. Any disturbance could decrease comparability with controlled systems where those interferences are excluded.

We tested the influence of various disturbances on cultures and culture environment in an incubator. To eliminate the necessity of removing shake flasks from an incubator and thus minimize the number of disturbance variables, we developed a prototype adapter. It allows automated feed in the flasks by continuous pump or syringe-based dosing systems. The adapter has a diameter of 5.5 cm at the bottom and is 7 cm high. It can be easily screwed onto shake flasks and closed with its respective top. The metal inlets allow connecting the shake flasks to a tubing system with pumps. So no further handling of the shake flask is necessary once it is put inside an incubator. We also monitored pH and pO2 online using an SFR shake flask reader (PreSens) (Photo 1). This system allows noninvasive measurement of both parameters in several shake flasks in parallel without removing those flasks from an incubator. 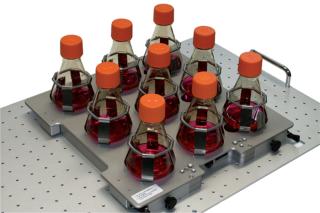 We cultivated Chinese hamster ovary (CHO) antibody-producing cell lines in ISF1-X incubators (KĂĽhner AG). The shake flasks used for pO2 and pH monitoring included chemical optical oxygen and pH sensor spots at their inside bottom walls. The SFR system noninvasively read out those sensors. The system is connected to a PC using Bluetooth technology so that online monitoring could be conducted without taking cultures out of the incubator or interrupting its shaking movements. If necessary, we adjusted incubator settings for CO2 and shaking frequency. 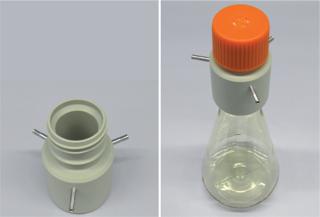 Effect of Disturbances and System Performance

Figure 1 shows that recovery of the CO2 content in incubator air can take up to 10 minutes. Having many shake flasks and consecutively removing and putting them back for sampling or feeding might lead to persistently low CO2 levels inside an incubator. That can influence pH levels in shake flasks. Culture temperatures in 125-mL and 250-mL shake flasks dropped by >3 Â°C when we removed the flasks from the incubator and kept them out at room temperature for 10 minutes. These are just two examples of how manual feeding and sampling outside an incubator can cause inconsistencies because cultures are subject to many factors that are impossible to reproduce every time. 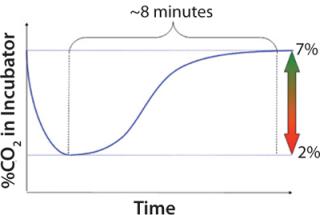 Sampling is a significant source of error because volume and viable cells are removed from culture. By contrast with larger scales (e.g., 2-L bioreactor systems, where removal of 1-mL sample would be 0.2% of volume), removal of 1 mL from a shake flask with 50-mL working volume would be 2% of volume. If feed rates are not adjusted to new suspension volumes after every sampling, performance may change (Figure 2). 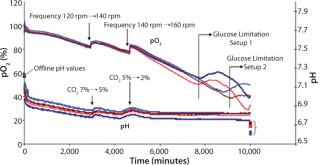 Figure 3 shows online data for pO2 and pH collected using the SFR system in shake flask cultures. Limitations could be detected because immediate drops in overall oxygen uptake lead to increasing pO2 in cell suspension. Appropriate steps could be taken to prevent limitations. The SFR measurement helped establish a partly controlled system. The new adapter did not limit oxygen transfer into the shake flasks, and automated feeding (which caused fewer disturbances) was successful. Together with the SFR system, that allowed assessment of the cultivation and partly controlling parameters, and the number of disturbance variables decreased. Necessary frontloading by preparing and connecting adapters to the shake flasks were overcompensated by automated feeding and decreased sampling.

Monitoring pO2 and pH online with the SFR system is a further step to enhancing process development efficiency at shake flask scale. The adapter prototype enabled automated feeding, which minimizes disturbances that can significantly influence cultures. Using both devices together can decrease overall workload per shake flask, enable higher throughput, and ensure that culture performance is more stable. That will allow you to obtain more reliable and comparable data for further scale-up processes.