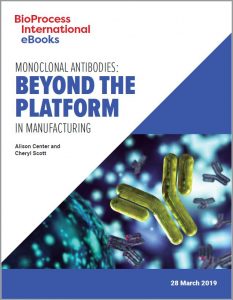 The current ‚Äúgold standard‚Äù platform process for biomanufacturing of monoclonal antibody (MAb) drug substances and products begins with cell-line engineering and development through seed-train culture. Production usually occurs in fed-batch cultures over a few weeks, with expressed material harvested in the supernatant. After clarification (typically by depth filtration, sometimes by centrifugation), the feed stream enters an initial step designed to ‚Äúcapture‚Äù the antibody. Protein A affinity chromatography is the powerful MAb capture method that anchors the downstream process. It‚Äôs also the most expensive step in the entire process ‚Äî but as many people will attest, ‚Äúyou get what you pay for.‚Äù

With intermediate filtration steps for buffer exchange (because different chromatography methods require different pH levels and buffer compositions), two polishing steps follow in most cases. They are most likely to apply ion-exchange (IEX) chemistries in removing process- and product-related impurities that coeluted with the MAb from the capture column. Options less commonly used include size-exclusion chromatography (SEC) and hydrophobicinteraction chromatography (HIC). Whatever viruses aren‚Äôt cleared through those methods can be inactivated with detergents and/or controlled high-temperature, short-term (HT-ST) intermediate holding. Nanofiltration may be used to remove virus particles. A final drug substance emerges from tangential-flow filtration (TFF), which typically uses ultrafiltration/diafiltration (UF/DF) membranes. It is formulated with excipients and buffers to make a drug product, which typically presents as a liquid in vials or ampules.

Using a generic process with minimal optimization for different MAb candidates saves money and time by building on a knowledge base that evolved over the first decades of the biopharmaceutical industry. As experts at the Institute for Bioengineering and Biosciences at Portugal‚Äôs Lisbon University wrote in 2015 (1), ‚Äúthis platform strategy has been adopted for the majority of companies working on MAbs.‚Äù However, relevant biological science and technologies have rocketed forward in the 21st century, and modern business pressures have companies examining the familiar biomanufacturing platform with a new perspective.

Just fill out this form to download the eBook now.

One thought on “Monoclonal Antibodies: Beyond the Platform in Manufacturing”