With two products now on the market, and a host of others in clinical trials, antibody-drug conjugates (ADCs) are slowly becoming a big business. Designed to deliver extremely active cytotoxic drugs that are otherwise undosable, they take advantage of the targeting ability of a specifically designed monoclonal antibody (MAb) to “shield” a highly potent API (HPAPI) as it travels through a patient’s bloodstream after administration. Once the antibody reaches its target on the cancer cell, it will release the payload, ready to damage or kill the cancer cell.

The pioneering product in the ADC market was the drug Mylotarg, which was launched by Wyeth (now Pfizer) in 2000 to treat acute myeloid leukemia in elderly patients. It was given accelerated approval by FDA because of a paucity of treatments for the disease. Its antibody component, gemtuzumab, latches on to the CD33 transmembrane receptor, which is expressed on the surface of blast cells, particularly leukemic ones. This is linked to the calicheamicin cytotoxic agent ozogamicin. However, the phase 3 trial that was run as part of the accelerated approval process showed the drug did not improve survival, and it caused serious side effects. It was therefore withdrawn in 2010.

This initial setback has not stopped research in the area. Since Mylotarg’s withdrawal, two further ADCs have been approved, and many others are in the development pipeline. Seattle Genetics, one of the two pioneers of ADC technology, launched Adcetris (brentuximab vedotin) in 2011 to treat two other forms of blood cancer: systemic anaplastic large-cell lymphoma and Hodgkin’s lymphoma. Here, the antibody is directed toward the cell membrane protein CD30. Then last year, Roche’s Kadcyla (ado-trastuzumab emtansine) was approved for the treatment of HER2+ breast cancer. It combines the antibody in Herceptin (trastuzumab) with an HPAPI. 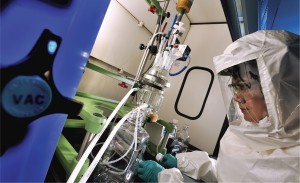 The technology behind an ADC is, at first sight, straightforward: A MAb is joined to an HPAPI by means of a short linker molecule, which is designed to break down at the active site and release the cytotoxic payload. The two products on the market use different technologies to do this. Seattle Genetics’ Adcetris is based on the company’s own linker chemistry, where the sulfur–sulfur bonds in cysteine residues on the antibody are reductively split to provide thiol “handles” for a linker to latch on to. The linker is preattached to the HPAPI — which, in Adcetris, is a maleimide-activated peptide.

A different amino acid forms the basis of the linker used in Kadcyla, in technology developed by Massachusetts-based ImmunoGen. Here, the primary amine in lysine residues is reacted with a bifunctional stable amide linker. This is usually done using an N-hydroxysuccinimide-activated ester. The second reactive site on the linker is then attached to the HPAPI through a chemical reaction. Both ImmunoGen’s and Seattle Genetics’ technologies are
being used by multiple companies — both big pharma and biotech — to develop potential ADCs.

Clearly, there is some variability in the number of HPAPI molecules that can be attached to each antibody, depending on how many amino acid residues are modified. That number is typically between three and seven. However, it is important that the variability across the antibody population is not too great, because the FDA wants to see strict control of the nature of the ADC molecules. This will not be the case if there is a wide range of different conjugates in the drug substance.

Because ADCs contain both antibody and highly potent small-molecule portions, manufacturing them is an order of magnitude more difficult than making either component alone. The handling requirements for each component must be considered and met, despite the fact that some of those requirements can directly contradict each other.

To make an HPAPI (as well as to have the ability to carry out complex chemical reactions), a company must provide effective containment. This is essential to protect both operators and the environment around a manufacturing suite. Tiny amounts of a compound are sufficient to have a biological effect (as low as picomoles for the most active); so containment is a top priority. The HPAPIs used in ADCs are typically microtubule disrupting agents that interfere with the cell cycle or DNA-modifying agents that kill cells — whether they are dividing or not. Many HPAPIs simply cannot be used as therapeutic agents in a simple drug format because their therapeutic index is too low. They cause too much damage and toxicity as they pass through the body and are likely to exert cell-damaging effects long before they reach cancer cells. In addition, the low dose that exerts a biological effect renders HPAPIs extremely hazardous to operators should exposure occur. ADCs are, effectively, prodrugs for such HPAPIs. 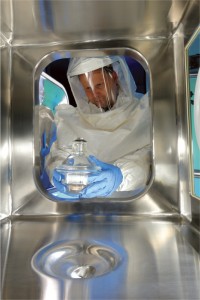 For the FDA to deem that a drug is occupationally potent (hazardous to operators), that drug needs to be present in the air at a level of 10 μg/m3. This is about a tenth of the amount of dust that the eye can perceive in bright light. However, there is no regulatory definition of what makes a drug an HPAPI, so erring on the side of caution is essential.

SAFC uses a classification system based on that developed by SafeBridge Consultants. In this system, HPAPI molecules that are used in ADCs are placed firmly in Category 4, which includes all compounds considered the most hazardous. Working with Category 4 compounds in powder form require operators to use respiratory protection with supplied air and full gowning procedures. Powders handled within an isolator under negative pressure prevent them from escaping into a wider atmosphere. The effectiveness of a containment system must be checked and validated before any HPAPI is handled. That is done using surrogate products, typically naproxen and lactose, which behave in a similar manner but without the hazards of an API.

Those tests take several days to complete. Breathing-zone samples are taken from around the areas where operators are typically present, and additional samples are taken from anywhere an HPAPI might conceivably escape. The wider room in which operations take place also is carefully monitored, as are entry vestibules. A facility passes the test if a containment of 5 ng/m3 over an eight-hour, time-weighted average is achieved. Compared with the highest occupational exposure limit for an HPAPI, this is extremely low; therefore, potential hazards to operators are minimized.

Whereas an HPAPI component must be contained and powder handled under negative pressure, the exact opposite is the case for an antibody component and the final drug product. They should be handled in an area that is under positive pressure to prevent the ingress of contaminants such as microbes and particulates.

SAFC overcomes this dilemma by carrying out hazardous handling steps involving an HPAPI in an isolator within a separate room, where the air is under negative pressure. Weighing and dissolution processes involving the HPAPI should be carried out under such conditions. No HPAPI or linker-HPAPI combination should leave the room unless it is in solution, because this removes the risk of airborne contamination. Although the solution remains hazardous, chances of operator or environment contamination are much lower.

A second suite, which is under positive pressure, is where the conjugation to an antibody takes place. The positive pressure protects a drug product from external contamination, and the room is ventilated through a single-pass, unidirectional airflow. This ensures that the air meets all necessary classifications. Although the risks from HPAPIs are much lower once they are in solution, they are not removed completely, and the conjugation reaction must still take place in a closed system that enables full containment of hazardous materials and use of appropriate engineering controls.

The high potency of HPAPIs means that complete and effective decontamination of equipment is vital. Except for small-volume products, it is not financially viable to install dedicated, single-product manufacturing lines, so most facilities are multipurpose and multiproduct. Fully validated cleaning procedures, along the lines of those required for HPAPIs, must be implemented because of the extreme risks of even tiny amounts of carryover from one batch to the next.

Such cleaning procedures are based on the maximum allowed carryover (MACO) system. Laboratory studies are first run to establish the expected level of recovery, then the MACO is calculated taking into account the surface area of the complete production line. For a facility handling HPAPIs, this MACO must be <10 ppm, a level significantly below that required for non–highly potent molecules. With that information in hand, the effectiveness of cleaning procedures can be evaluated and validated, again using a surrogate chemical.

It is also important to protect operators during cleaning procedures. Because residual HPAPI will no longer be contained, operators should wear “moon suits” with self-contained breathing apparatus while cleaning and decontaminating all work areas and equipment that might have come into contact with residual HPAPI.

Because ADC technology is still relatively new, manufacturers and regulators are still learning best practices. However, regulators have been making progress in creating regulations to ensure that manufacturers of ADCs have comprehensive understanding of every aspect of their processes. Implementation of ICH guidelines for biologics manufacturing also will affect ADC developers because its requirements detail insights right back to preclinical stages.

It is important to realize that the conjugation to form an ADC is not the only part that must be controlled, and that final product is not the only one that must meet regulatory requirements. Rather, the product consists of three separate active parts. The HPAPI and antibody are obvious, but the linker must not be forgotten. Linkers play an active role within patients (because it holds together targeting molecules and payloads) as does as its fragmentation to release that payload once the active site is reached.

Few pharmaceutical companies — and likely no small biotechnology companies — are in a position to make the huge capital investments required for the safe manufacture of ADCs. Although any pharmaceutical manufacturing capacity is costly, the high-containment equipment needed to handle HPAPIs is extremely expensive to purchase, operate, and maintain. Yet current good manufacturing practice (CGMP) capabilities are required long before a drug reaches commercialization. And, as HPAPI payloads become ever more potent, the capital investment required in equipment and containment will inevitably rise to keep up.

So it is extremely advisable for a company developing an ADC to work with one of the specialist contract manufacturing companies (such as SAFC) that have the capacity and expertise to work with such complex products, and for which the capital cost is offset by the ability to work on multiple products from different customers. It is also wise to form a partnership with a CMO as early as preclinical development. For any biological product, the manufacturing process is a crucial part of the marketing license.So the sooner the process can be established, the better it will be in the long run. A highly qualified and experienced CMO will keep up to date with developments in the field, enabling customers to keep up as requirements change, too.