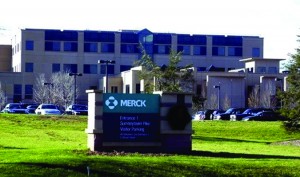 Single-use components have been successfully incorporated into many unit operations for both upstream and downstream processing, from laboratory scale to commercial manufacturing. The development of single-use filling needles has created an opportunity to introduce fully disposable systems into final formulation and filling of drug products (1). One major challenge in replacing a cleanable filling line containing stainless steel needles is to ensure that an alternative system can satisfy all critical performance parameters established for an existing process.

In 2012, Merck & Co., Inc. (Kenilworth, NJ) chartered a capital project to replace an existing syringe-filling machine in its clinical manufacturing facilities for finished drug products based in West Point, PA (Photo 1). As part of this project, capability was also added to use a single-use filling wetted path, including single-use needles. Here, we detail the management of this project from its initiation to final filling of an engineering batch. Our process-qualification study contained several critical stages: 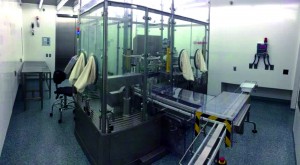 The final system design incorporates a Bausch+Str├Čbel SFM 5110 machine (Photo 2) and a Pall single-use filling wetted path. This system was evaluated using an engineering batch of sterile product. About 7,500 syringes were filled with a dosing accuracy meeting the user-requirement specification (URS) and no visible particles.

Major Objectives: Two major objectives drove our desire to include capability for a single-use wetted path in this project: a goal to improve filling-dose control relative to the performance of the former filling┬Āmachine, and the manufacturing departmentŌĆÖs strategic goal to achieve broader implementation of single-use technologies. In addition, Merck had a pipeline of diverse and evolving sterile products that would require a filling line capable of supporting those products, including multiple dosing technologies and other configurations.

After a competitive bidding process, we selected Bausch+Str├ČbelŌĆÖs SFM 5110 filling machine. It is a versatile machine for processing syringes, vials, and cartridges using nests or tubs of final containers. The machine is particularly suitable for batch sizes produced in formulation and development laboratories. Because the dosing methods for small batches are exactly the same as those used in Bausch+Str├Čbel high-capacity production lines, our selected methodology for formulation and development can be directly incorporated into higher-capacity production machines.

Bausch+Str├Čbel recommended use of a surge vessel to maintain a constant pressure head on the peristaltic pumps. The company engaged Pall to collaborate on designing a single-use filling wetted path with a two dimensional (2-D) surge bag. This made the final project a three-way collaboration between Merck, Bausch+Str├Čbel, and Pall.

Selection┬Āof┬ĀBarrier Technology
A critical decision had to be made between installation of an isolator-based system or a RABS. However, the single-use system had to be installed in an existing cleanroom area rather than a new facility, a requirement that became an important consideration in selection of a suitable barrier system. We had to consider several factors in assessing the requirements for physical┬Āand aerodynamic barriers to protect the filling line from contamination: compliance, flexibility, single-shift operations, sterilization, and the cleanroom.

Compliance: The technology must satisfy regulatory requirements, standards, and guidelines.

Flexibility: The system must be able to support operational demands of clinical drug-product manufacturing.

Single Shift Operation: The process must allow for an existing staffing model to be maintained.

Sterilization: Barrier technology must work with existing infrastructure for sterilization.

Cleanroom: The new process must be integrated into an existing cleanroom infrastructure.

The Solution: We chose a passive RABS for its increased protection of drug products as well as ease of installation into the existing cleanroom. This solution also provided cost advantages over an isolator-based line option because of reduced changeover time, simplified automation, smaller footprint, and use of existing sterilization infrastructure.

Risk Assessment
We considered risk assessment to be a vital part of the qualification procedure, especially because the proposed system incorporated a new filling machine (a prototype single-use filling line with customized barrier technology).

Using a design FMEA template helped us anticipate potential failure modes. We quantified the level of risk with risk prioritization numbers (RPNs), which are determined based┬Āon the combination of severity, occurrence, and detectability. Remediation actions were implemented for those activities with relatively high RPNs. Some examples of those risk remediation plans follow:

Primary user requirements
Incorporation of a single-use wetted path in this filling process was an innovative and important development in the advancement of MerckŌĆÖs manufacturing capabilities. The project therefore demanded special emphasis on defining primary user requirements for it covering a broad range of items, activities, and procedures. Some key user requirements were related to the supplierŌĆÖs manufacturing environment,┬Āpackaging and sterilization of system components, materials of construction, container integrity, supplier audits, and change control.

System Manufacturing: All assemblies must be manufactured in an environmentally controlled area at a facility that adheres to good manufacturing practices (GMPs).

Packaging and Sterilization: Assemblies must be received sterile and double bagged, with supporting documentation (e.g., certificates of conformance and irradiation).

The supplier will provide all available extractables data (from materials before and after gamma irradiation) for the individual product-contact components. If data are not available, the supplier will work with Merck to obtain the necessary information.

Container Integrity: The vendor should provide evidence of qualification data to support containerŌĆōclosure integrity of the single-use system (biocontainers, tubing, and connections).

Audits: Merck will conduct regular audits of the supplierŌĆÖs and sterilization siteŌĆÖs premises and systems.

Change Control: The vendor will provide documentation/evidence of a change-control procedure for all changes in manufacturing techniques or materials that may be necessary.

The 2-D biocontainers are manufactured using coextrusion of bag layers, a process that minimizes the potential for introduction of particulates. To guarantee container integrity, all biocontainers are submitted to a leak test based on pressure-decay measurement before they are assembled in single-use systems. 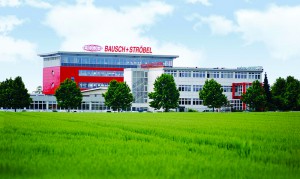 Engineering drawings and bill of materials are approved by the customer, and formal change-control processes are in place. Finally, material use is controlled with SAP materials management logistics software from Sapphire Systems. 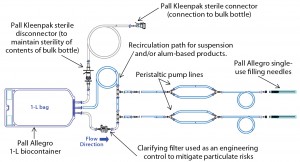 Prototype┬ĀDesign
Figure 1 shows the prototype design used for initial evaluation. This design was evaluated as part of the FAT for the syringe filler at Bausch+Str├ČbelŌĆÖs Ilshofen facility in Germany (Photo 3) during September 2013 with participation of a single-use systems expert from Pall. Some design modifications were proposed based on observations during that testing. Acceptable dose control and system fitŌĆōfinish were demonstrated with water┬Āand a product surrogate. Merck product development scientists and manufacturing staff provided additional VoC feedback on the prototype design. Figure 2 details the modifications made to the initial design. 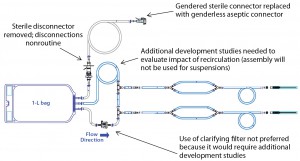 Figure 2: Modifications to design of the single-use wetted filling path

Particulate Evaluations
Control of particulates during singleuse system manufacturing and in the application of those systems is a topic of special focus within the biopharmaceutical industry. In 2014, the Bio-Process Systems Alliance (BPSA) published specific guidelines and recommendations for testing, evaluation, and control of particulates for single-use process equipment (5). Those guidelines state, ŌĆ£The goal of suppliers, end users, regulators, and standards-setting organizations should be to minimize particulates in drug products without placing unnecessary expectations for minimal safety/ quality gains.ŌĆØ 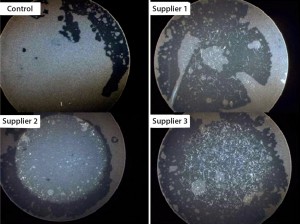 The risk of particulate contamination is most significant when filling products downstream of final sterilizing filtration. To mitigate this risk, a flush or purge step can be included before filling begins, but that procedure was deemed impractical at pilot scale because of limited drug-product availability. Merck had chosen to discontinue two earlier projects on single-use systems during proof-of-concept testing in 2012 because elevated levels of particulates were identified in three other suppliersŌĆÖ biocontainers during testing. A 2012 team rinsed the inner biocontainer surfaces with water that had been filtered through a 0.2-┬Ąm MilliQ filter from MilliporeSigma. The resulting rinses passed through a one-inch membrane filter, which the team then examined using a stereo microscope (Figure 3). Collected fibers ranged from submillimeter to several millimeters in length.

Particulates can be eliminated by incorporating a clarifying filter downstream of the sterilizing filter, an option first incorporated into the prototype design (Figure 1). However, VoC feedback from product development teams recommended removal of that clarifying filter from┬Āthe prototype (Figure 2) because its inclusion would require additional studies for support. Therefore, we initiated a new study to evaluate particulate levels in a Pall Allegro 1-L biocontainer in support of removing the clarifying filter from the prototype design. The studies also included simulated production conditions. Figure 4 shows the test assembly used for particulate evaluations, which differs from experimental assemblies used to generate Figure 3. 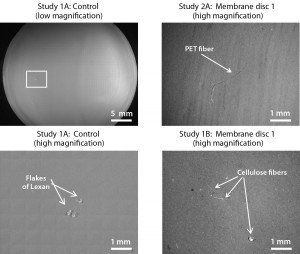 To simulate flushing of particulates from the biocontainer assembly, we filled a 45-L bottle with polysorbate 80 solution with similar properties to finished drug product. To recover and identify any particulate matter, we pumped that solution through a particulate capsule filter into the 1-L biocontainer, then pumped 1-L aliquots through three analyzing membrane discs. Figure 5 presents images of those membrane discs.

Only one to three fibers showed up in each test sample, indicating a dramatic improvement over results obtained in the 2012 projects. The detected fibers (polycarbonate, cellulose, and polyethylene terephthalate) are common in the laboratory environment, so we concluded that they did not originate from the biocontainer itself. Having confirmed suitably low particle counts for the biocontainer, we could justify removal of the particulate filter from our prototype design, then finalize the single-use system design and proceed to evaluate its performance with an engineering batch.

Figure 6: Modifications to design of the single-use wetted filling path

Final Design and Engineering Batch
The final design for the single-use filling wetted path (Figure 6) is a simpler system than the prototype after removal of the particulate filter, recirculation loop, and sterile disconnector.

Filling Performance in an Engineering Batch: In November 2014, we tested the single-use system (supplied as a gamma-irradiated, double-bagged assembly) in an engineering batch with specific tasks and objectives: 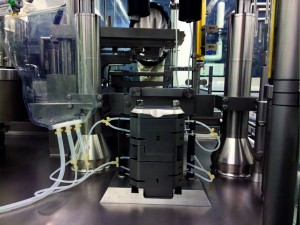 The sterile wetted filling path was installed in the Bausch+Str├Čbel SFM 5110 filling machine (Photo 4). Change parts were cleaned and sterilized by normal procedures, and filling was conducted under full aseptic conditions. We determined dosing accuracy by weighing the final two syringes from each tub using an integrated in-process control system. Syringes were submitted for 100% visual inspection based on the operations groupŌĆÖs normal procedures.

We used three different single-use wetted paths during filling, and data from the engineering batch provided the following results: About 7,500 syringes were filled with a relative standard deviation in dosing of 0.46%. Such dosing accuracy met requirements listed in the filling machine URS. No visible particulates were observed in manual visual inspection using normal production procedures without magnification.

Goals Achieved
In this project, we found that a singleuse filling system can be successfully qualified from design through to delivery with clearly defined user requirements and effective project management. The major objective of improved filling dose control for sterile syringes was achieved using a Bausch+Str├ČbelŌĆÖs SFM 5110 machine and a Pall single-use filling wetted path. This achievement also fulfilled the manufacturing departmentŌĆÖs strategic┬Āgoal for broader implementation of single-use technologies.

Our process qualification study highlighted four key aspects of the project that could be taken away and applied to similar developments in the future: a need to develop URS for both the machine and associated disposable components; the importance of customer feedback at all stages of design and implementation; a system of keeping all parties engaged and supportive by maintaining strong internal and external sponsorship; and a strategy for continually seeking opportunities to transfer technologies and learnings to the larger manufacturing network.

Successful introduction of this single-use filling system was an innovative and important development in the advancement of MerckŌĆÖs manufacturing capabilities. It provided crucial support for the companyŌĆÖs pipeline of diverse and evolving sterile products that require versatile filling lines capable of accommodating them, including multiple dosing technologies and other configurations.