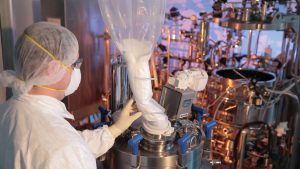 For many years, media and buffer ingredients used in powder form were transferred from stock containers using open scoops, weighed and mixed in buckets or open-top bags, and then carried in and dumped from those buckets or open-top bags directly into production vessels—based on the premise that sterility wasn’t required at that early stage of manufacturing. While much of this process was often carried out in a separate room from the production line to contain airborne contaminants, final transfer to the production line still had to occur.

In recent years, manufacturers have recognized that, while sterility may not be an issue, worker exposure to airborne particulates, and the potential for cross-contamination when changing the line over to different products are.

Consequently, biopharmaceutical manufacturers have started to implement single-use systems for powder transfer. Unfortunately, many early systems were simply adapted from liquid-handling systems already in use at the time, and converted to handle powders. These systems often have shortcomings inherent in the genesis of their designs.