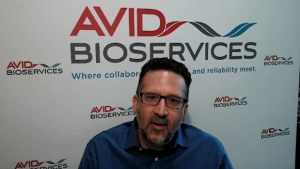 Having settled into its role as a dedicated contract development and manufacturing organization (CDMO), Avid Bioservices is expanding. The company made several changes to its executive and sales teams after refocusing its mission in 2018, recruiting people Compton characterized as â€śstrong contributors to growth in the CDMO industry.â€ť Avidâ€™s Myford facility, which was commissioned in 2016 and now has entered its final design stages, similarly exemplifies the companyâ€™s commitment to growth. That facility will leverage utilities installed for Peregrine Therapeutics in 2016 to support 12,000 L of new capacity, more than doubling Avidâ€™s existing capacity. The latest design includes two 2,000-L bioreactors supported by 200-L and 500-L systems.

Compton attributes Avidâ€™s growth to strong demand for mammalian cell culture and to increasing numbers of drug developers and candidates. As existing clients move through their product life cycles, and as newcomers request preclinical support, Avid has needed to amplify its capacity accordingly. But unlike several other CDMOs, Avid has decided against acquiring specialty capabilities such as a dedicated cell-line development (CLD) program. Instead, Avid is forging strategic partnerships with companies such as Aragen Bioscience that operate close to Avidâ€™s facilities.

Historically, Avid clients have engaged different CLD programs and then transferred in their materials. That extends timelines to clinical production. â€śBut by partnering early with a cell-line developer,â€ť Compton explained, â€śwe can improve that timeline. Instead of starting out with research cell banks, we can start off earlier with stable minipools during process development.â€ť Establishing a network of primary partners also strengthens collaboration on analytical methods and technology transfer.

Despite intense competition in the CDMO industry, manufacturers need not bring all capabilities in house. Strong partnerships among vendors enable clients to engage specialists but leverage a single contract for all early manufacturing efforts. â€śI think that what weâ€™ve established with such relationships does help clients navigate the early phase of product development.â€ť