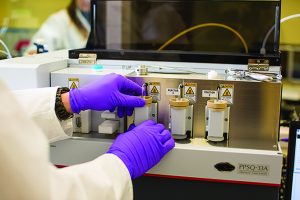 Regulations require that biomanufacturers assess the intactness of protein and glycoprotein products as well as confirm the terminal sequences to look for existing variations. ICH Q6B guideline section 6.1.1 c states:

Protein Terminal Structure
Proteins comprise linear chains of amino acids linked to one another through amide bonds. Each amino acid has an amine functional group at one end and a carboxylic acid functional group at the other. Linking the carboxylic acid group of one amino acid with the amine group of another produces this amide bond. This process is controlled by the cellsâ€™ protein translational machinery and results in the conversion of mRNA to protein.

That fact allows use of specific protein chemical procedures for sequencing proteins by means of the termini.

Terminal Amino Acid Sequencing
Not all proteins are composed of a single chain. Monoclonal antibodies (MAbs) comprise four protein chains: usually two identical heavy chains and two identical light chains. Therefore, antibodies have two different N-termini and two different C-termini. For successful sequencing, the chains of multichain proteins should be separated to prevent ambiguity in the data generated. If a molecule shows posttranslational processing resulting in ragged termini, more than one terminal amino acid sequence will be detected. Those data ultimately can be used as indications of a moleculeâ€™s intactness.

BioPharmaSpec has developed methods for dePEGylating proteins that are PEGylated at the N-terminus before analysis to allow N-terminal sequencing of blocked N-termini.
An important application of N-terminal sequencing is the unambiguous differentiation of the isobaric amino acids isoleucine and leucine in a protein sequence. MS-based sequencing cannot differentiate those two amino acids because they have identical mass. If the full sequence of a protein needs to be confirmed, N-terminal sequencing can be used to analyze purified peptides containing leucine or isoleucine and allow determination of a sequence to the fullest extent possible. That is required to demonstrate that the primary amino acid sequence of a biosimilar is identical to the reference/innovator sequence (per EMA and US FDA biosimilar guidelines).

C-Terminal Sequencing
There is no fully analogous, reliable method akin to Edman chemistry for determining the C-terminal sequence of a biopharmaceutical. To assess the C-termini, BioPharmaSpec scientists use carboxypeptidase digestion or mass spectrometric mapping strategies. In the latter approach, intactness of a protein C-terminus or presence of ragged ends can be assessed using data obtained from intact molecular-weight analysis and peptide mapping. That includes generation of confirmatory peptide fragment ions to confirm the nature of C-terminal peptide or peptides.

Figure 1:â€‚C-terminal peptide (minus lysine) of a monoclonal antibody heavy chain as identified in a peptide map and the high-energy fragmentation of that peptide

Figure 1 shows the C-terminal peptide (minus lysine) of the heavy chain of a MAb as identified in a peptide map (signal at 6.91 minutes) and the high-energy fragmentation of that peptide. Masses shown are consistent with the expected fragmentation pattern of that peptide. Because this peptide contains leucine residues, N-terminal sequencing of the collected peptide would need to be performed as described above for a definitive differentiation between leucine and isoleucine in this peptide.

Intact Molecular-Weight Analysis
Intact molecular-weight analysis of a drug product can be used as an orthogonal procedure to support conclusions regarding the structures of N- and C-termini and intactness. MAbs are examples of proteins in which C-terminal sequence variation is observed. In this case, C-terminal lysine residues of the heavy chains, which usually are removed in native antibodies, can be present to an extent in recombinant MAbs, resulting in variability of the C-terminus of the heavy chains. In such cases, a combination of intact molecular-weight analysis of released, deâ€“N-glycosylated heavy chain to assess the drug product for the with-lysine and without-lysine forms (a 128-Da mass difference) and molecular-weight analysis as well as sequencing of the C-terminal peptides using peptide mapping can be used to confirm C-terminal heterogeneity. This combined analysis also enables an assessment of relative amounts of modification for batch-to-batch and biosimilar-to-reference/innovator comparisons.

A Complete Assessment
Several techniques are required to provide a full assessment of the intactness of a protein/glycoprotein biopharmaceutical product. Automated N-terminal sequencing, intact molecular-weight analysis (often following deglycosylation to allow analysis of the protein backbone without data-complicating heterogeneity), peptide mapping, and mass spectrometric sequence analysis of the terminal peptides (both the N- and C-termini) all must be performed to produce a complete assessment. Data from these methods provide an overall understanding of protein structure and enable a comparative quantitation of modifications at either terminus.