Pharmaceutical companies with gene therapies in their pipeline need to establish scalable production processes that can keep up with the increasing demand in terms of volume, quality and robustness, says CEVEC.

Gene therapies are seen as one of the most promising approach to treat life-threatening diseases with no therapeutic options and high medical needs.Â  In addition, gene therapies are now advancing also into indications with larger numbers of patients, including Alzheimerâ€™s and Parkinsonâ€™s, thereby dramatically increasing the demand for viral vectors. As a result, pharmaceutical companies with gene therapies in their pipeline need to establish scalable production processes that can keep up with the increasing demand in terms of volume, quality and robustness.

One of the major bottlenecks in AAV vector production is volumes. Standard technologies have proven to be very hard or impossible to scale, as they are often based on adherent cell lines or require transient transfections or helper viruses.

While suspension cell lines are getting more and more common now, most processes still rely on transient transfection to bring the different AAV genes into the producer cells. The typical transient transfection process is complex and requires three different GMP-grade plasmids driving up the production costs. This is where ELEVECTA stableÂ AAV producer cell lines come into play.

Based on a stable human suspension cell line, ELEVECTA enables full scalability in all types and formats of suspension bioreactors, from laboratory to commercial scale. ELEVECTA Producer Cell Lines reach titers of 1*1014 vg/l and more during a typical single-use suspension bioreactor run. CEVEC has now successfully scaled-up from 15 ml to 50 L bioreactors in a single step without any productivity loss, demonstrating the scalability and robustness of the process.

ELEVECTA Producer Cells contain all components required for AAV stably integrated into the cell. There is no need for cGMP plasmids, special transfection reagents and difficult-to-scale-up transfection protocols. Just one cell line which, after propagation and expansion to the desired cell titers, produces AAV vectors at high yields â€“ a process that resembles well-established production methods for recombinant proteins and monoclonal antibodies. 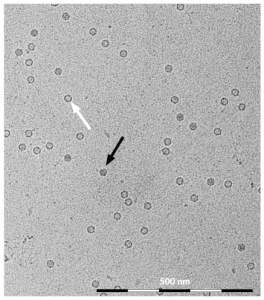 Every capsid and every gene of interest

AAV vectors can have different surface structures, so called serotypes, which in nature allow the virus to target specific cells in a body. For gene therapy applications viral serotypes can further be engineered to improve their tissue-specificity and safety. Every ELEVECTA producer cell line is custom-made and employs a specific natural or engineered capsid gene and the therapeutic gene of interest.

With this newly introduced technology, CEVEC is the leading technology provider for stable AAV producer cell lines. Its inherent scalability, process robustness and consistency in yield and quality provide the features that are needed to pave the way for the success of modern gene therapies in a broad range of indications.