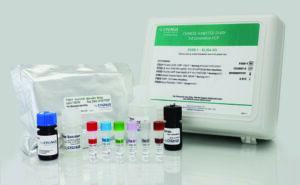 Different analytical methods have been developed to detect host-cell proteins (HCPs) in bioprocess streams. Advancements in such methods are enabling biomanufacturers to optimize their purification processes and ensure that their products are safe and efficacious. To celebrate the 20th anniversary of BioProcess International, Ken Hoffman (founder of Cygnus Technologies) provides insights into the history, trends, and future of HCP analytics.

History: 1990s to 2022
The recombinant therapeutic protein industry was in its infancy in the early 1990s. HCPs were recognized as bioprocess impurities that could cause adverse effects manifesting as immunological reactions or other off-target biological effects. Thus, it was known that HCPs should be measured and reduced to the lowest levels possible. Early US Food and Drug Administration (FDA) submissions for recombinant drugs in the 1990s used orthogonal methods such as two-dimensional polyacrylamide gel electrophoresis (2D PAGE), two-dimensional Western blot (2D WB), high-performance liquid chromatography (HPLC), and enzyme-linked immunosorbent assay (ELISA) to detect HCPs. Each method has its limitations. Although ELISA was recognized as the most sensitive method, few biopharmaceutical analytical scientists thoroughly understood the choice and preparation of a relevant antigen and how best to immunize animals to get broadly reactive antibodies. Pioneer biotherapeutics showed acceptable efficacy and safety, so the above analytical methods were adopted in regulatory guidelines. At that time, those FDA guidelines were vague on many points, including absolute allowable limits, which were methodologically limited to parts per thousand total HCPs. Instead, drug applications were reviewed with consideration of theoretical risks from quantity and frequency of dosage and route of administration. Many startup companies entering the field late in the 1990s lacked the resources and internal expertise to develop HCP analytics and instead sought to fill those needs through outsourcing. In 1998, Cygnus Technologies, a recognized leader in bioprocess analytics, was the first to offer those services, built on two decades of proficiency in developing immunodiagnostics for infectious and metabolic diseases, drugs, and hormones.

Initially some biopharmaceutical companies resisted outsourcing analytics because of concerns about intellectual property and the belief that each drug substance was unique (and therefore should require unique HCP analytics). However, most recombinant drugs were expressed in the same cell lines, including Chinese hamster ovary (CHO) and Escherichia coli. Most HCPs should be conserved across recombinant products expressed in the same cell line. In the 1990s, the overall belief was that generic anti-HCP antibodies and ELISAs still would have some relevance across products, so generic reagents became available as process development tools. Because they were developed by experts from the immunodiagnostics industry, those generic reagents were often superior to process-specific assays developed in-house as part of the requirement to enter phase 3 clinical trials.

Without confirmed reports of clinical problems caused by HCP impurities, many experts in the biopharmaceutical industry believed that HCPs could be reduced to inconsequential levels by purification processes. The hope was that once a process demonstrated reproducible purity, companies would not need to perform routine lot-to-lot testing of HCPs. The precedent for that rationale arose from the conventions used for contaminant analysis. Contaminants are hazardous agents (e.g., adventitious viruses, bacteria, molds, and endotoxins) that are not part of a process. They could be introduced inadvertently during cell culture and purification steps. Biomanufacturers dealt with that concern by performing clearance studies that introduced contaminants into a scaled-down purification process and evaluating how much contamination was removed. If levels of clearance are deemed to be satisfactory over multiple lots, then routine lot-to-lot testing of contaminants should no longer be required as long as a process remains unchanged. The fundamental difference between impurities such as HCPs and contaminants such as viruses is that impurities are part of the process and their presence is expected in a product through different purification stages. As long as a sensitive assay can detect downstream HCPs after unexpected or undocumented deviances in the process, HCP impurity assays should be used routinely for in-process control and lot release.

Today
Process development experts now recognize how to create the best source of an upstream, process-specific HCP antigen to generate and affinity-purify antibodies. Best-practice antibodies enable the development of sensitive and specific ELISAs to serve as valuable tools for driving purification process optimization and ensuring safety and efficacy in early clinical trials. Well-developed ELISAs that can measure HCP levels below parts per million (ppm) levels are several orders of magnitude more sensitive than orthogonal methods of 2D PAGE and 2D WB. A low-cost, easy-to-perform HCP assay is used widely from lot to lot. Regulatory guidelines always will lag behind technological improvements, however. Thus, biomanufacturers should embrace new technologies as ŌĆ£value-addedŌĆØ analytics rather than as methods that are needed simply to meet existing guidelines. Most biopharmaceutical companies already have moved beyond ŌĆ£check the boxŌĆØ minimal regulatory expectations. They now recognize the value of sensitive analytics to drive optimal purification process development and to serve as important in-process control analytics.

The major limitation of even the most sensitive ELISAs is that they are only as good as their antibodies, which, in turn are only as good as the antigens used to generate them. Furthermore, an ELISA can provide only a number for total HCPs, telling nothing about individual HCPs that might be problematic. For those reasons, orthogonal methods of HCP detection also have evolved, driven by the need to identify individual HCPs. The most well-established orthogonal method used to establish ELISA antibody reactivity to individual HCPs is 2D WB. Unfortunately, 2D WB lacks the sensitivity and specificity necessary to detect the most relevant HCPs: those that copurify with a drug substance.

To solve that disconnect in sensitivity, Cygnus Technologies developed a novel and proprietary type of immunoaffinity chromatography method called antibody affinity extraction (AAE). AAE uses a broadly reactive antibody generated from upstream HCPs to extract, enrich, and concentrate downstream HCPs from a drug substance. The refinement of mass spectrometry (MS) methods applied to proteomics studies provides a powerful tool to identify individual HCPs. MS data enables the determination of biological function and prediction of antigenicity of individual HCPs. However, MS also is limited by sensitivity and specificity ŌĆö mainly because a large amount of drug substance interferes with the analysis. AAE sample preparation for MS concentrates HCPs while removing drug substance, thus enabling the use of less complex methods for the identification and quantitation of individual HCPs.

The Future
Increasingly, published reports are indicating that HCPs are causing problems. HCPs have been reported to cause adverse immune reactions, off-target biological effects, binding to a drug substance and reduced activity, and increased drug clearance rates. HCPs with enzymatic protease and lipase activity have been associated with a reduced shelf life of a drug. Those clinical observations highlight the value of comprehensive HCP analytics to provide sufficient sensitivity to identify individual HCPs in a final drug substance.

When used early in process development, a broadly reactive anti-HCP antibody developed into a sensitive ELISA will serve as a value-added tool, thereby ensuring safety and efficacy while minimizing the need for making changes during product development. Such a strategy will benefit traditional biopharmaceutical companies as well as the makers of vaccines, cell therapies, and gene therapies. An ELISA with proven reactivity and sensitivity to downstream HCPs at levels of detection of Ōēż10 ng/mL should optimize purification processes to yield inconsequential levels of HCPs. Orthogonal characterization of individual HCPs in a final drug substance by methods such as AAE and MS will provide additional safety, efficacy, and stability assurances. MS methods are likely to evolve further and might be practical as lot-release tests for individual problematic HCPs. All companies producing biologics should consider outsourcing the specialized analytical skills to proven expert service companies to reduce risk, cost, and time to market.