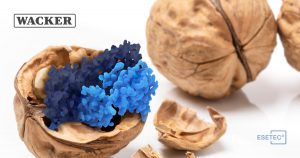 Escherichia coli is the most popular expression system for all nonglycosylated biopharmaceuticals. However, common challenges include purification of expressed proteins recovered from the periplasm or those needing refolding from inclusion bodies. These constraints have been addressed by the unique secretion E. coli expression system ESETEC (E. coli secretion technology) developed by Wacker Biotech.

Through years of experience, Wacker Biotech has observed that secretion efficiency strongly depends on the properties of the respective target proteins. Whereas some proteins are easily released to the culture media, others remain trapped inside the periplasm. The newest ESETEC version allows the controlled release of the product into the culture media at any chosen time point. The principle of the controlled product release technology is based on a decoupling of the production phase from release phase. Whereas product accumulation is initiated by the addition of a given inducer, the subsequent release of the correctly folded target protein into the medium is triggered by the addition of a second inducer that leads to the formation of a distinct release factor.

Just fill out the form below to watch the recorded webcast.