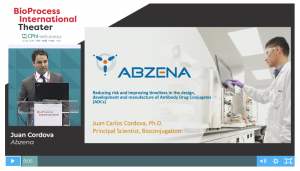 Cordova began his presentation by introducing Abzena as a global network that provides an integrated solution for the development and manufacture of biotherapies, including antibodyâ€“drug conjugates (ADCs). The company operates three different facilities, in which it develops and manufactures complex small molecules as well as bioconjugate therapies.

ADCs are one of the most complex examples of biotherapies approved by the US Food and Drug Administration (FDA) on the market today because they comprise three different components, each of which requires its own separate manufacturing and development process. The first component is the protein scaffold, normally a monoclonal antibody, which is covalently bound by a linker technology (the second component) to a cytotoxic payload molecule (the third).

ADCs have a multistep mechanism of action. An ADC in circulation will recognize a specific antigen on the surface of a target cell. Upon recognizing that antigen, the ADC is internalized and enzymatically degraded inside cellular lysosomes to generate the active form of the small molecule payload as well as some protein degradation sequences. The payload induces apoptosis of the target cell.

Recently, each ADC component type has seen marked innovation. For example, the protein component in some new approaches is a highly engineered antibody that is designed specifically for conjugation therapy. Other protein fragments and antibody protein molecules are in development as well. Cordova noted that, similarly, many different conjugation technologies are in the works on the linker side as well as for small-molecule payloads. He pointed out that no longer does the industry use only highly potent small molecules for oncologic indications. It also intends to use small peptides, both linear and cyclic, as well as nucleic-acid payloads for nononcological applications such as diabetes.

The type of technology that is chosen to produce a certain ADC dictates directly some of the properties that the final product ADC possesses. Another consideration when designing an optimal development and manufacturing approach for ADCs includes the manufacturability of a certain conjugation technology. One emerging technology uses engineered cysteine antibodies to site-specifically attach small-molecule payloads such as peptidyl-prolyl isomerase domain (PPD) dimers.

Depending on the conjugation approach and pillar used, this crude reaction mixture can be purified directly using tangential-flow filtration (TFF) to remove excess small molecules. However, that approach doesnâ€™t remove protein base impurities such as highâ€“molecular-weight species and conjugates with unwanted drugâ€“antibody ratios (DARs). So a chromatographic base separation normally is integrated to remove protein-based and some small-molecule impurities, followed by a final TFF buffer exchange into the drug-product formulation buffer.

ADC manufacturing can be improved through use of a single-use membrane absorber, incorporating it into the downstream process otherwise based on conventional resin-based chromatographic separations that often take much longer and require validation of cleaning and packing procedures. Abzena provides a highly integrated approach to the development and manufacture of ADCs and thus can expedite the timeline required for these highly complex processes.