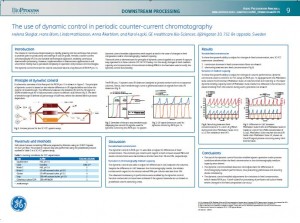 The results show that the dynamic control functionality was able to adjust for differences in feed concentration. The variation per column with regard to both amount eluted MAb and eluate concentration was 3% and 4%, respectively. The dynamic control functionality was also able to adjust for differences in dynamic binding capacity (DBC) between columns. Despite the difference in DBC between the chromatography media, the relative variance with regard to the amount eluted MAb per column was less than 3%.