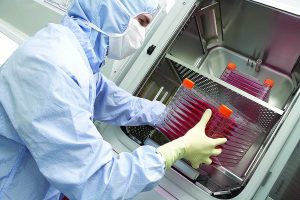 As viral vectors continue to push gene therapy innovations closer to market, many researchers are setting their sights on optimizing transfection, the process of delivering corrective genetic material into cells. ItŌĆÖs not just a question of how to transfect them, but also how to do so efficiently and at high volumes. Approaches that work for one cell line might not perform well for others, and transfection protocols can have different implications for scalability and cost during production for clinical trials.

For those and other reasons, experts usually reply, ŌĆ£It depends,ŌĆØ when asked about the best transfection strategies for gene therapy programs based on adenoassociated virus (AAV). As a senior bioprocess application scientist at Corning Life Sciences, Ann Rossi Bilodeau often receives questions from researchers about which approaches they should apply: Should they use suspension or adherent cell culture systems? Is one transfection reagent preferable to another? How long should a transfection process run? Bilodeau explains that which strategy to use ŌĆ£depends greatly on what youŌĆÖre trying to achieve in the end, and thereŌĆÖs not just one right or wrong approach. From cell lines to platforms, facilities, and individual researchers, many factors can influence transfection ŌĆö and a process should be optimized to account for all of them.ŌĆØ Best practices are worth exploring, however, as Bilodeau and experts from reagent supplier Polyplus-transfection demonstrate herein.

Transfection Methods for Viral Vectors
The primary question with transfection is how to do it. AAV-based gene therapy research generally relies on chemically mediated transfection. Compared with complex and expensive processes such as electroporation and microinjection, chemical transfection is easy to use and thus considered to be the gold standard in cost-efficient upscaling.

Cassie-Marie Peign├®, a scientific support specialist at Polyplus-transfection, explains, ŌĆ£Most AAV therapies involve human embryonic kidney (HEK)293 cells, which are transfected easily using chemical reagents. When developed specifically for viral vector production, such reagents are as good as it gets in terms of reproducibility and robustness, negating the need for more expensive methods of physical transfection.ŌĆØ

Figure 1: Confluence of human embryonic kidney (HEK)293T cells in the top (A) and bottom chambers (B) of a Corning CellSTACK 10-layer vessel on the day of transfection; images were acquired using a Bysameyee handheld USB microscope at 1000├Ś magnification.

Considerations for Platform and Scale
Choice of platform can influence selection of transfection agents, but neither adherent- nor suspension-based culture systems offer clear advantages over the other in terms of effectiveness. Both platforms are compatible with transfection, and the choice of vessel has more to do with cell growth than with cell transfection.

If researchers are unsure about which platform to choose, Peign├® suggests considering timelines and scales. ŌĆ£Adherent platforms are conventional methods to generate good titers quickly, and such processes are already well established in manufacturing facilities.ŌĆØ Adherent-culture vessels might be limited to scale-out rather than scale-up processes, which can present challenges for labor and manufacturing footprints. But options such as Corning CellSTACK, HYPERStack, and CellCube platforms can help increase yields and decrease labor requirements compared with single-layer vessels, especially when configured as closed systems. Whereas suspension tanks and transfection reagents can facilitate scale-up, such platforms require additional time to optimize for cell viability and quality, especially when working with suspension-adapted cells.

Keep in mind that scale goes both ways ŌĆö and that scaling down might be just as important as scaling up. Bilodeau says, ŌĆ£Using scalable vessels and transfection reagents helps you move across scales with relative ease. If you need to go back and optimize, you can troubleshoot your process on a small scale before carrying it back through to manufacturing. Often, having a well-characterized process is more important than simply maximizing production.ŌĆØ

Meaningful Results
Transfection for viral vectors can be a daunting undertaking, but it doesnŌĆÖt need to be. To arrive at a meaningful result efficiently, researchers need to know the hallmarks of successful and unsuccessful processes. Peign├® points to a problematic ŌĆ£tendency to assume that transfection efficiency fully correlates with viral titer, which is not the case. If youŌĆÖre performing optimization, then you always should consider the results in terms of viral titer at the end of your process.ŌĆØ

Researchers also should feel comfortable asking for support. Suppliers such as Polyplus-transfection and Corning Life Sciences can help scientists select the right products for their objectives. Peign├® says, ŌĆ£If youŌĆÖre starting a new process, itŌĆÖs always helpful to contact suppliers to ensure that youŌĆÖre beginning with an optimal combination of platform, media, reagents, and other factors.ŌĆØ Suppliers also can help determine ŌĆ£that youŌĆÖre operating with the correct guidelines beforehand. Knowing where to look can save considerable time.ŌĆØ

Know Your Protocols: Follow a transfection protocol or guidelines for use. Sometimes seeding densities and times in culture before transfection must be adapted for different cell types and applications, provided that cells are dividing actively at the time of transfection.

Mitigate Detachment: If adherent cells detach from a vessel surface in response to protein or viral vector expression or because of toxicity, seeding cells on specific surfaces (e.g., Corning CellBIND surface) before transfection can enhance attachment.

Optimize Reagents and Raw Materials: Be sure to use only high-quality plasmid preparations that are free from proteins, RNA, and endotoxins.

Adjust the amount of plasmid DNA and the reagent-to-DNA ratio in your process to increase its transfection efficiency.

Cell toxicity sometimes occurs after transfection. If toxicity is observed, then decrease your reagent-to-DNA ratio or the amount of plasmid DNA used in your process. (Doing so is especially important if the protein that is expressed is toxic.) It might also be necessary to change culture medium four to six hours after transfection.

Use a regent (e.g., PEIpro linear polyethylenimine reagent) that is suitable for transfections in the presence of serum and antibiotics. When using a serum-free medium, be sure that it permits transfection.