In honor of BPIâ€™s 20th anniversary as a publication, the editors invited authors to reflect on the industryâ€™s past, present, and future. Below, the chief operating officer of Selexis offers her perspectives along with responses to questions from the editorial team.

Significant Scientific and Technological Innovations
One of the most important innovations in bioprocessing has been the combination of next-generation sequencing with bioinformatics. The ability to sequence a host cell-line genome and transcriptome rapidly and cost-effectively and the development of bioinformatics to analyze those data have enabled significant advances in cell-line development (CLD).

Analyses of host manufacturing cell lines enables scientists to determine where potential production issues might occur. Secretory requirements can differ from protein to protein, so genomic and/or transcriptomic analyses of parent manufacturing cell lines can help determine where deficiencies or inappropriate expression of cellular proteins could affect a given biotherapeuticâ€™s production. For example, the genome and transcriptome analysis of Selexisâ€™s parent manufacturing cell line enabled us to determine that the chaperone makeup needed to be optimized for specific therapeutic proteins. In other cases, cellular components interfering with secretion had to be removed.

Detailed genomic data can be used to assess cell lines for transgene integrity at junctions within the genome, transgene copy number and correct DNA sequence, number and locations of genomic integration loci, and possible adverse effects from transgene integration. Those data and the right bioinformatics can enable direct assessment of clonality of a cell line and provide traceability and validation or the origins of cells used to generate it. That is a vast improvement over the indirect methods of 20 years ago. Using genomic data to validate clonality makes monitoring drift and contaminations in production cell lines considerably easier.

What scientific and technical developments have surprised you the most over the past 20 years? In mammalian CLD, I have been impressed with continued advances in technologies and methods for protein expression. From gene-editing technologies to knock-out and knock-in genes for productivity improvement and sophisticated systems in robotics and automation, technical advances in CLD have been critical for further development of newer biologic modalities such as bispecific antibodies and Fc-fusion proteins.

At Selexis, we are committed to innovation. Our platform is the result of nearly 20 years of ongoing cutting-edge scientific discoveries and their effective large-scale implementation. In that time, we have helped our customers advance more than 160 programs into clinical development, 10 of which have been approved to treat cancer, metabolic and genetic disorders, and autoimmune and inflammatory diseases. 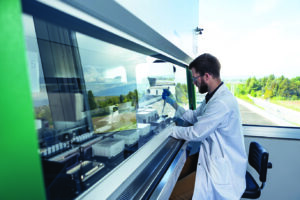 Significant Regulatory Developments
CLD always will be subject to regulatory concerns. For example, contamination from adventitious agents and occurrences of cell-line instability can appear at any point during development, resulting in toxic or reactive contaminations of production lots. That is why we developed technologies for sequential mapping of genetic and genomic changes in all Selexis-generated cell lines. We are the first biotechnology company to fully sequence and annotate the genome and transcriptome of our Chinese hamster ovary (CHO)â€‘K1 production cell line. We completed that work in collaboration with the University of Lausanne and the Swiss Institute of Bioinformatics, with whom we developed proprietary bioinformatics tools. Those data have led to genetic improvements in production characteristics of Selexisâ€™s proprietary CHO-M (CHO-K1) cell line across the companyâ€™s transcription, translation, and secretion activities.

Using data from the parent cell line, we can build a knowledge base, database, algorithms, and workflow to track mutations in all production cell lines over the course of development and manufacturing runs.

Advancement of Successful Products and Services
Foundational to our SUREtechnology platform are SGE (Selexis Genetic Element) solutions: unique epigenetic DNA-based elements discovered and optimized by Selexis scientists. The elements â€śunwindâ€ť mammalian-cell chromatin, permitting high and stable expression of recombinant therapeutic proteins. SGEs increase gene expression by >20 fold with proven stability over more than 60 generations. They have revolutionized the field of CLD, and for the past 20 years, Selexis has consistently generated some of the industryâ€™s highest-producing cell lines in the shortest amount of time.

What difficulties must be addressed? We increasingly see our customers addressing complicated and intractable diseases by developing complex protein therapeutics such as novel scaffolds decorated with peptides. Although that can be great news for patients, such complex molecules often are more challenging to manufacture because most nonnatural proteins need to be expressed at high enough levels to be commercially viable.

Today, most such therapeutics are generated in CHO cell lines. Robust CHO cell production has a history of enabling mammalian-cell posttranslational processing. CHO cells are not â€śdesignedâ€ť to express such novel proteins and especially not at the nonnaturally high levels necessary for making a product for patients. For that to be achieved, companies engaged in CLD need to improve/modify their CHO technologies and capabilities continually to address transcriptional, translational, secretory, and metabolic stresses created by newer molecules.

In the early 1990s, we manually prepared and poured polyacrylamide gels for sequence analysis. Data acquisition and analysis were time-consuming and laborious tasks. After the successful automation of the Sanger sequencing process, scientists started to benefit and profit from automated sequencing and computer analysis. However, the sequencing of the human genome was estimated to have cost around one billion dollars in 2001. Such costs were prohibitive for smaller companies wanting to sequence their manufacturing cell lines.

In 2011, Selexis announced the complete sequencing of our proprietary CHO-K1 cell line. That endeavor took a great amount of time and an investment of well over CHF 1 million. And now you can read headlines of companies competing to sequence the entire human genome for $100!

Novel Devices, Increased Capabilities
Today, I marvel at novel devices with new chemistries used to increase accuracy and flexibility of genomic data and analysis. When combined with powerful bioinformatics tools, they provide us with a better understanding of cells used to express proteins. The capability to analyze the entire genome and transcriptome of our CHO cell line rapidly and cost-effectively, including coding regions and targeted locations, allows us to modify its activity and productivity. That is a capability I could not have imagined when I was a research assistant in the early 1990s.