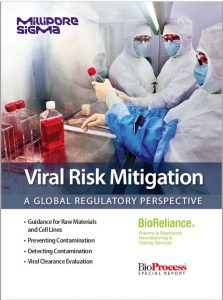 The production of biologics will always have the risk of viral contamination. Manufacturers have developed a multitiered approach â€” tailored to individual processes â€” to prevent adventitious viruses from entering production processes, detect contamination in raw materials and process intermediates, and remove viruses in downstream purification. This article provides an overview of the global regulatory framework to ensure the viral safety of biologics.

Unfortunately, not all adventitious virus contaminations are easily detected. For instance, most insect viruses silently infect insect cells. Nodavirus or rhabdovirus infections of insect cells are common, and although scientists generally believe that such viruses are not of concern to humans, nodavirus can produce morbidity after injection into suckling mice.

Just fill out this form to download the full special report.