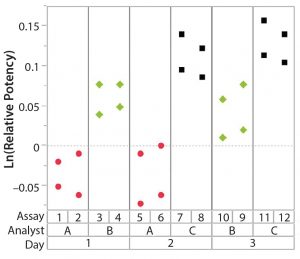 During lifecycle development of a biological assay (bioassay), identifying and reducing sources of variability might be required to improve method performance. Here I recommend some statistical and graphical approaches (consistent with USP <1033>) for practitioners to identify variation from experimental results (1).

Sources of Variation in a Bioassay
To correctly identify sources of variation in a bioassay, analysts must consider how that bioassay is to be executed. In particular, the experience and technical expertise of each analyst expected to execute the bioassay should be taken into account. If the dataset used in a variability study contains results predominantly from highly trained and experienced analysts, the estimate of precision can be disingenuously better (smaller variation) than with a more diverse level of technical aptitude across the analyst population. Conversely, if analyzed results emanate from inexperienced analysts, an estimate of precision can be worse (larger variation) than expected. Other frequently considered sources of variation in a bioassay can include day-to-day variation, critical reagent lot variation, and inter- and intra-assay (also known as repeatability) variation. Once analysts establish a dataset that reasonably can be expected to identify key sources of variation, the following assessments would be meaningful. 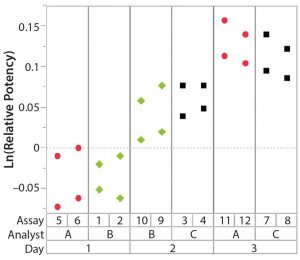 With bioassay data, analysts recommend the use of a logarithm baseÂ e data transformation on relative-potency results before performingÂ calculations. This transformation reduces the impact of variance heterogeneity with increasing potency (2) and allows for a direct comparison of results separately across nominal levels, as shown in Table 6 of USP <1033>. 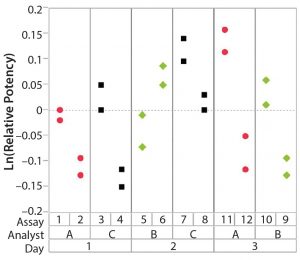 As noted in USP <1033>, %GCV is a measure relevant to the logarithm-transformed data, whereas %CV is relevant to the original units of the metric. If the estimate of variation is relatively low (e.g., %CV < 20%), there is a minimal difference in the estimates of %GCV and %CV from a practical perspective. Correspondingly, %CV typically is used more widely by practitioners who have developed well-behaved bioassays.

Illustration of Variability Studies
After having collected a library of data from executed bioassays, analysts most readily can understand the variance component estimates and the corresponding percentage of variation by using a graphical representation. Examples are not provided in USP <1033>, so they are addressed here as recommended practice. Table 1 indicatesÂ the highest component of variation in each of Figures 1â€“4. The simulated results are from a design based on the work of three analysts over the course of three days, with different simulated data used for each figure. Two assays were performed by each analyst on a given day, and each combination of analyst/day is captured in the variability study. 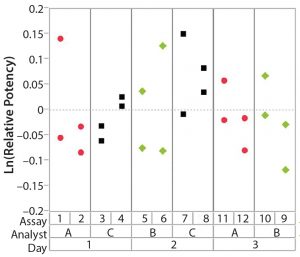 The type of statistical and graphical analyses of experimental data shown here are recommended for practitioners wanting to identify and address sources of variation when performing a bioassay. The information provided by those results can provide valuable insights and enables more appropriately focused efforts to reduce bioassay variability.

Bower KM. The Relationship Between R2 and Precision in Bioassay Validation. BioProcess Int. 16(4) 2018.

JMP v14 software was used to generate all graphs and statistical calculations.